Friday 3rd July – Basseterre, St Kitts – The Guyana Amazon Warriors secured their first win of this season’s Hero Caribbean Premier League with a comprehensive victory over St Kitts and Nevis Patriots at Warner Park. Some superb bowling from the Amazon Warriors’ spinners and destructive hitting from Denesh Ramdin and Lendl Simmons was enough for them to brush aside their opponents with ease. Ramdin, a new father this week, celebrated the birth of his son with an unbeaten 54 as he made the chase look very easy. 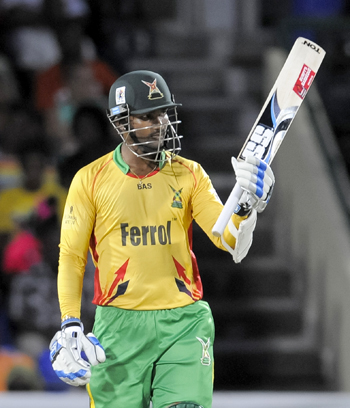 The Patriots started well as Martin Guptill, an Amazon Warriors player last season, combined with Evin Lewis to build an opening partnership off 66 in 9.3 overs and lay an excellent platform. Lewis was the first man to go when he was well caught by Brad Hodge off the bowling of Ronsford Beaton.

In an interesting move by Ramdin, left arm spinner Veerasammy Permaul opened the bowling and completed his entire allocation in one spell. His four overs cost 35 runs, which represented a reasonable return for a spinner with the new ball.

As ever, Sunil Narine was the pick of the Guyana bowlers, bowling a maiden in his first over as he again made it very difficult for batsmen to score. He bowled Guptill with a ball that the New Zealander tried to sweep. The very next ball Narine picked up the wicket of Orlando Peters, who also attempted an ill-advised sweep shot to a ball that turned the other way – trapping him LBW.

Shahid Afridi was sent up the order in an attempt to give the innings some much needed impetus, but the experiment failed when the Pakistani all-rounder skied a catch off Devendra Bishoo to cover. Bishoo became the second bowler to take two wickers in two balls when a frustrated Marlon Samuels charged the spinner, only to be smartly stumped. Tonito Willett also fell to spin when he played a lazy shot off Tillakaratne Dilshan, departing for just nine. Having been 83-1, the Patriots had lost five wickets for 20 runs.

A rebuilding effort of sorts took place between Carlos Brathwaite and Sohail Tanvir, who gave their side a total of some respectability. Braithwaite’s innings of 23 off 11 balls included three sixes and was vital in setting a target of 150. While it could have been a lot worse, it still looked a long way under par.

The Amazon Warriors got off to a sedate start to their chase, but Simmons should have been run out when he was only on five. He hit the ball to mid-wicket and set off for a non-existent run but Samuels missed with the throw. However, the Patriots got a breakthrough just two balls later when Dilshan mistimed a pull to Willett at fine leg.

Simmons got some luck again on 21 when he drove the ball in the air off Brathwaite. Willett timed his jump to perfection but the ball burst through his fingers. Simmons gave yet another chance on 25 when he pulled the ball into the legside but a despairing dive from Brathwaite wasn’t enough to claim the catch.

Eventually Simmons’ good fortune run out when he attempted to hit Tabraiz Shamsi down the ground for six, only to find Sheldon Cottrell on the boundary – dismissed for 41 off 33 balls. The big fast bowler celebrated with his customary salute, clearly delighted to finally see the back of last year’s leading scorer.

South African spinner Shamsi was a little unfortunate to finish with figures of 1-25 as both Hodge and Ramdin struggled to read his variations. He showed real promise in this spell and on another day could have gone for half the runs and picked up twice the wickets.

After Simmons’ departure, Ramdin picked up where the opener had left off and the Guyana captain was brutal in his treatment of Afridi in particular. He hit four consecutive sixes off the leg-spinner as Afridi’s final over cost 28 runs. At the end of those six balls the game was over as a contest, with the required rate having plummeted to less than four an over.

Hodge joined in the six hitting action as he top edged a Hero Maximum off Cottrell and followed it with another six pulled over long leg. Hodge went for one six too many when he was brilliantly caught by Willett, but it was too little too late for the Patriots.

Having struggled to get their first win on the board, the Amazon Warriors will be delighted with such a comprehensive victory in St Kitts. For the Patriots this isn’t the first time their middle order has folded and this will need to be worked on as the tournament progresses. 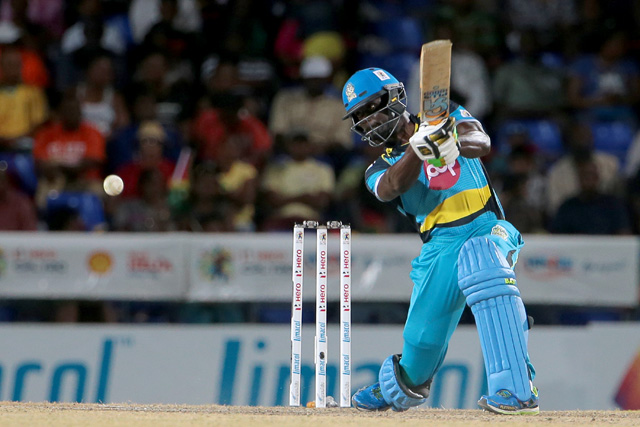 Andre Fletcher drives during his knock of 77. (Photo by Ashley Allen/CPL)

Andre Fletcher extended his lead as the top run scorer in the tournament and Kevin Pietersen made his first CPL half century as the Zouks scored 202-5 off their 20 overs – the largest total the St Lucian side have made in their history. The Tridents could never get the required rate under control as they fell to just their second defeat of this year’s event.

Johnson Charles and Andre Fletcher of the Zouks have been the in-form opening partnership of this year’s CPL and it looked like we were in for more of the same when Charles blasted the third ball of the match for six. Unfortunately for the Zouks this was not another big opening stand, with Charles dismissed by a delivery from Ravi Rampaul that caught a leading edge to dolly up to Dilshan Munaweera.

The wicket did not slow things down as Kevin Pietersen made his highest ever CPL score – finishing with 73 off 39 balls. For once this year it was Fletcher that was playing second fiddle as the Warner Park crowd was treated to some vintage Pietersen.

At the halfway stage of the innings the Zouks had reached 91-1 and were well set to make a very large total. Both Pietersen and Fletcher kept the rate up as they put together a partnership of 138 off 75 balls. The shot of the innings came from Fletcher when he smashed a 109 metre six that went all the way out of Warner Park. The very next ball Fletcher hit a Hero Maximum that was nearly as big as Robin Peterson struggled to find a way to control the Zouks.

Both men seemed to be hitting sixes at will and it came as a surprise when KP didn’t get all of a big shot off Jeevan Mendis – departing to a great catch from Jonathan Carter.

The Tridents were celebrating again one ball later when Mendis dismissed Henry Davids with a brilliant googly that bowled the South African for a golden duck. While those two wickets would have been pleasing for the Tridents, their inability to hit the stumps with the numerous run out chances on offer was disappointing.

Fletcher was eventually out LBW when on 77 from 50 deliveries – falling to yet another Mendis googly. The Sri Lankan was the pick of the Tridents bowlers, picking up 3-33 from his four overs.

The Tridents had a mountain to climb in pursuit of the 203 needed to win but they began well enough, reaching 47-1 off their Powerplay overs. However, it was always going to be a tough ask to keep going at the required rate, and so it proved. Munaweera was the man to go inside the first six overs when he tried and failed to clear the big boundary off Shane Shillingford.

Dwayne Smith fell in the very next over when Darren Sammy took a brilliant catch over his shoulder to dismiss the Tridents opener – caught and bowled. As has so often been the case, it was Shoaib Malik who looked the most likely to get the Barbados team home, and the leading run scorer in CPL history look instantly at ease at the crease.

At the other end wickets continued to fall as Carter attempted a pull shot off Nathan McCullum that went straight up in the air and was caught by the keeper. Kieron Pollard should have been dismissed on two when he gloved a ball through to the keeper off an excellent Shannon Gabriel delivery, however the umpire gave him not out. Malik was not as fortunate when he drove the ball down the ground off Sammy and was caught on the boundary for 31 off 19.

When Mendis fell in almost identical fashion to Malik the outlook was bleak for the Tridents. Pollard was still at the crease but there was too much for him to do, and when he was brilliantly run out by Fletcher for 31 the game was long since over as a contest. The Tridents eventually lost by 30 runs.

This win reaffirms the Zouks as one of the frontrunners for qualification for the latter stages of the tournament, sitting in second place just one point behind the Tridents. Even more exciting for the Zouks than their position in the table is the complete nature of this performance, with both batsmen and bowlers performing brilliantly in a way that bodes well for the matches to come.