Cricket Australia and Cricket NSW have paid tribute to Brad Haddin after he announced his retirement from international and state cricket today. 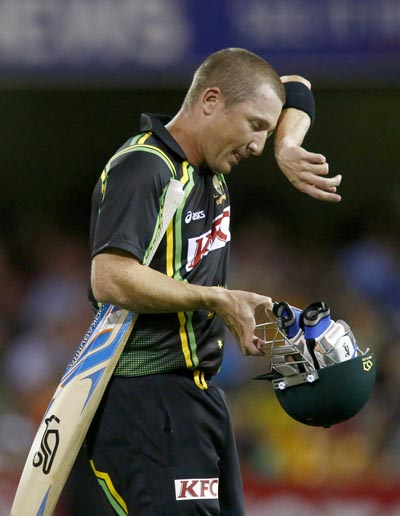 Australia wicketkeeper-batsman Brad Haddin has announced his retirement from cricket.

The uncompromising wicketkeeper-batsman will continue to play Twenty20 cricket for the Sydney Sixers in the KFC Big Bash League.

Cricket Australia CEO James Sutherland praised Haddin for the vital leadership role he played during a significant transition in the national team when a number of all-time greats retired.

Haddin, 37, waited until he was 30 to debut in Test cricket following the retirement of Adam Gilchrist and quickly established himself as a tenacious batsman and gloveman, playing 66 Tests.

Only Ian Healy, Gilchrist and current chairman of selectors Rod Marsh played more Tests for Australia as a wicket-keeper.

And only Gilchrist and Haddin averaged above 30 with the bat amongst Australian wicket-keepers who played more than a dozen Tests.

Haddin’s batting was pivotal during Australia’s 5-0 whitewash of England two seasons ago, topping the series averages with 61.63 during a string of strong first innings performances which saw him change the early momentum of Test matches.

“Brad was a vital player during an important period in Australian cricket,” Sutherland said.

“His tenacity with bat and gloves was matched with an unflinching will to win which made him the foundation of a changing team.

“Brad’s strong performances and positive influence on the team were all the more remarkable given he was dealing with the serious illness suffered by his daughter Mia.

“He showed true leadership at the most difficult of times and proved a loyal deputy to Michael Clarke when appointed vice-captain from the 2013 Ashes series.

“Brad can be enormously proud of his contribution to Australian cricket on and off the field.”

“As well as building one of the finest careers by an Australian wicket-keeper, Brad has given tremendous service to NSW for 15 years,” Jones said.

“A born leader and mentor, Brad has also demonstrated great skill, toughness and longevity in his chosen discipline.

“Brad holds the NSW all-formats caps record of 195 matches jointly with Greg Matthews and sits ninth on the list of most first class matches played for NSW.

“He is also second to Phil Emery with the number of dismissals by a wicket-keeper and 11th amongst the all-time first class run scorers for NSW.

“He also has the most matches, most runs, most dismissals and fastest century in one-day cricket for NSW.

“Brad epitomises and has strongly contributed to the successful culture of NSW cricket and we look forward to him continuing to play a significant role moving forward.

“His loyalty to state and country is a shining example to all those who will follow in his footsteps.”

BRAD HADDIN CAREER HIGHLIGHTS
• From Queanbeyan, Haddin debuted with the short-lived Canberra Comets in the state one-day competition aged 20, playing nine matches over two seasons with an average of 41 including a century.
• One of the most productive and explosive run-scorers in domestic cricket, Haddin played nine one-day internationals as a specialist batsman alongside wicket-keeper Adam Gilchrist before Gilchrist retired in 2008.
• Haddin topped the series batting averages in Australia’s 2013-14 whitewash of England with 493 runs at 61.63, passing 50 six times and scoring a century.
• Only three Australian wicket-keepers played more Tests than Haddin’s 66: Ian Healy (119), Adam Gilchrist (96), Rod Marsh (96).
• Haddin’s 270 dismissals as a wicket-keeper sits behind only Gilchrist (416), Healy (395) and Marsh (355) for Australia.
• Only Gilchrist (5570 at 47.61), Healy (4356 at 27.40) and Marsh (3633 at 26.52) scored more runs than Haddin’s  3266 at 32.99 as an Australian wicket-keeper.
• Haddin’s Test batting average of 32.99 is bettered only by Gilchrist (47.61) amongst Australian wicket-keepers who have played more than a dozen Tests.
• He was vice-captain of Australia’s Test team during much of the past two years.

BRAD HADDIN DOMESTIC ACHIEVEMENTS
• Holds the NSW games record of 195 matches across all formats jointly with Greg Matthews.
• By far the most prolific NSW first class wicket-keeper, scoring 5829 runs at 41.94
• His 96 First Class matches are ninth on the all-time list for NSW.
• His 316 first class dismissals for NSW are second to Phil Emery’s 378.
• Haddin is 11th on the NSW list of first class run scorers with 5829 runs at 41.94 including 11 centuries.
• He is the most prolific batsman and wicket-keeper in Australian domestic one-day cricket with 3010 runs in 94 matches at 34.60 including six centuries. He also claimed 164 dismissals.
• Haddin captained NSW in 20 Sheffield Shield matches for nine wins, six losses and five draws and 14 one-day games for six wins and eight losses.
STATISTICS