Dale Steyn says his passion and hunger to win games for South Africa has been the pillar behind his reign as arguably the best fast bowler of his generation. Steyn’s entry into the 400-wicket club is further testament to the brilliance and skill of the 32-year-old, who continues to raise the bar in the current era of Test cricket. 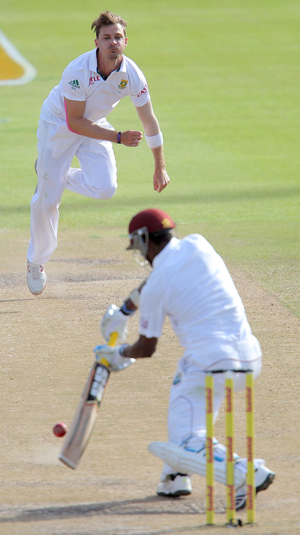 “I have never been a stats person,” he said about the achievement. “It’s nice to have these numbers but I have had a lot better moments in my cricketing career. Winning games for my country has always been objective number one so the jobs not over yet. It’s cool, it’s nice to have 400.”

Steyn praised the all-round effort from the bowlers in “difficult conditions”, more so the patience and pressure they exerted alongside renewed intensity and an attacking approach. He led the attack until the very last over of the day in true “Dale Steyn fashion”, an effort he says came easily because of his current state of mind.

“It was a good day for us,” he said to the media after the days play. “We always knew that once we get them to six down their lower order batters don’t tend to like hanging around, those are wickets we can wrap up quickly. It’s not wrapped up yet but that was the initial goal. Throughout the day we didn’t let them get away with the game.

“I love what I am doing right now, even if it’s in 40 degree heat and the ball is staying ankle high,” he said. “It’s (the ball) not bouncing and there’s no seam and it’s very slow, I would rather be here than anywhere else right now. There was a period (after the IPL) when I actually didn’t want to have a ball in my hand, I think I just needed maybe two or three weeks to get that love back again.”

YouTube tribute to Dale Steyn from some of the Proteas