Final Rained Out As Scotland And Netherlands Share Title

The International Cricket Council has congratulated Scotland and the Netherlands for winning the ICC World Twenty20 2015 Qualifier after the final was rained off on Sunday. Under the regulations of the tournament, in the event of a no-result in the final, the title is shared. 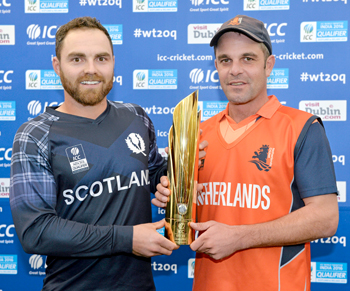 Team captains Preston Mommsen of Scotland (left), and Peter Borren of Netherlands, share the trophy after the Final was abandoned due to rain before a ball was bowled. Picture credit: Brendan Moran / ICC / SPORTSFILE

ICC Chief Executive David Richardson, who attended the event, said: “I would like to congratulate both teams on winning the ICC World Twenty20 Qualifier. It was a shame that the weather prevented us from completing the tournament as planned but it’s fair to say that they were the two form teams and both deserved to win.”

In addition to those two sides, Ireland, Hong Kong, Afghanistan and Oman have qualified to take part in next year’s ICC World Twenty20 in India.

“First and foremost this was a qualification tournament so I would also like to congratulate all the teams that will be travelling to India. It was a tremendously competitive tournament with very little separating the teams. In the group stage, no one side dominated and none was unbeaten. In the end, Ireland and Scotland topped the two groups but, in fact, it could have been any one of three or four teams,” said Mr Richardson.

“The fact that all six qualifying teams were extremely competitive  bodes well for the tournament in India where they will get the opportunity to showcase their talents at the ICC World T20.

“Associate cricket has never been so buoyant as it is today. The ICC is committed to providing our Associate and Affiliate Members with the support they require to develop and improve the quality of their cricket at all levels. Part of that support comes in the form of staging and raising the profile of tournaments such as this. With 20 of the games broadcast live on television around the world and every match covered live, ball by ball online, this has been an extremely strong advertisement for the Twenty20 game at Associate Member level.

“I’d like to thank all the players and match officials for the quality of their performances and for the excellent spirit in which all the matches were played. It’s great that there have been no on-field disciplinary issues at all and that the matches have been played in an atmosphere of competitive sportsmanship.

“It is important also to thank the tournament hosts, Cricket Ireland and Cricket Scotland, for an excellent job. Thanks also to the ICC staff, volunteers, spectators, media and everyone who have helped to make the tournament a success.”

Meanwhile, the Netherlands’ Timm van der Gugten’s consistent performance during the tournament has earned him another seven places on the ICC Player Rankings for Twenty20 International bowlers, taking him above such notable players as Wayne Parnell of South Africa, Sohail Tanvir of Pakistan and India’s Ravindra Jadeja.

From a player rankings perspective, it was a good tournament, too, for Afghanistan’s bowlers. Mohammad Nabi moved up one place to 21st position, Dawlat Zadran gained 18 places to 33rd spot and Shapoor Zadran re-entered the rankings in 30th position after a good tournament for the left-arm seamer. The leading Associate bowler for this format remains George Dockrell of Ireland, who lost one place during the tournament but still occupies 15th place in the world.

It was not so profitable for Afghanistan’s batsmen as Mohammad Shahzad lost four places in the rankings. However, the aggressive opening batsman is still the leading Associate batsman in T20s and sits just inside the top 20. The gap is closing, however, with Netherlands’ Michael Swart gaining three places to 24th position overall.