By Ravendra Madholall in Toronto
Former Guyana senior captain Damodar Daesrath has thrown his support behind the West Indies to come good against England in their three-match Test series, which bowls off on Monday at the Sir Vivian Richards Stadium in Antigua and Barbuda. 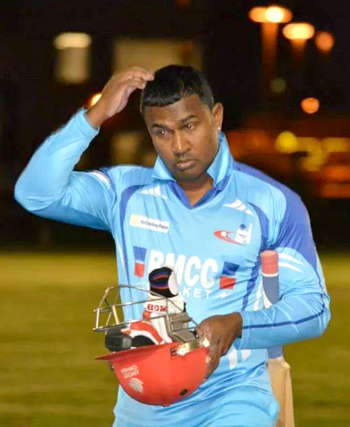 Daesrath told this publication that he is very optimistic the Caribbean team will maximize home advantage to defeat the tourists in all three fixtures slated for across the region.

West Indies are currently at number eight in the International Cricket Council’s Test ranking, while the Englishmen are at number three, but Daesrath believes the disparity in rankings between the two sides would not be a factor in the series.

“I [am] confident West Indies can be the victorious side in this three-match series; they are home and that is the difference while the team is very balanced and can be a triumphant combination,” Daesrath related.

The second Test is scheduled for May 21-25 at St George’s Stadium in Grenada with the final encounter billed for Bridgetown, Barbados, commencing May 1.

Daesrath, who represented his adopted country Canada in First-Class and One-Day Internationals, strongly feels the experience in the West Indies side will also be very helpful against England, who may be psychologically down following their devastation against Australia in the Ashes series where they lost all five Test matches.

“Not ruling out England completely, but after they were badly beaten by the Aussies, that can give West Indies greater momentum now; should be a very interesting series, but I am backing the hosts to take control very early,” the Berbician disclosed.

“Well, this is Test cricket and I don’t want to make any prediction, but West Indies is traditionally known to be a competitive team in Test cricket; they have not been too good over the years, but this is a great opportunity for them to compete and improve their status,” Daesrath divulged.

He also believes with veteran Shivnarine Chanderpaul still around, his presence would be profound and now the young players should able to play with him to build long innings.

Apart from Chanderpaul, Daesrath stated that Chris Gayle would have been a huge asset for the series given the impact he has made in all versions of the game, but the flamboyant Jamaican has been ruled out of the series, owing to a recurring back injury.

“Obviously, Shiv is a legend with the bat and Gayle can be very dangerous, but I know Shiv will be the man to do the job again but Gayle along with former skipper Dwayne Bravo will certainly be missed,” he said.

Daesrath, who represented Guyana in 12 First-Class games, took a swipe at the selection panel for the omission of Narsingh Deonarine for the series, stated that the attractive left-hander could have easily justified his spot.

Deonarine accumulated over 500 runs in the recently concluded West Indies Cricket Board Professional Cricket League Four-Day
tournament, registering two consecutive centuries. Daesrath is of the firm opinion that the middle-order batsman, who also bowls off-spin, had done enough to warrant a place in the squad.

“Quite surprising that he was overlooked because [they] are using the regional tournament to select players who are outstanding and I think he should have been selected because he had a productive season with the bat, plus he bowled well too,” Daesrath concluded.