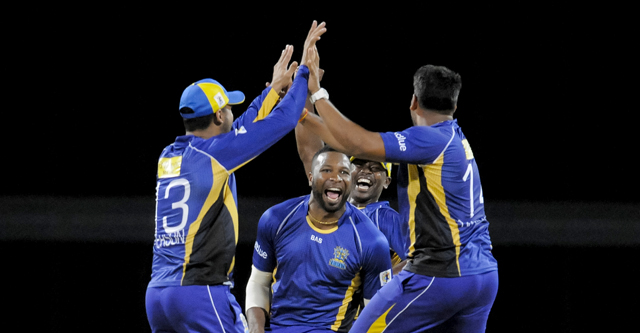 The Caribbean Premier League defending champions Barbados Tridents got their 2015 season off to a near-perfect start with a thumping 49-run victory over last season’s runners-up the Guyana Amazon Warriors in front of a packed Kensington Oval crowd.

Ravi Rampaul took 3-16, and Robin Peterson 3-31 as the Tridents surged to victory with the Amazon Warriors folding to 109 all out in pursuit of the Tridents’ imposing first innings score of 158-6.

The Amazon Warriors lost star-man Lendl Simmons in the second over of their run-chase when he was run out by Jason Holder and once they lost Shivnarine Chanderpaul and Denesh Ramdin within the Powerplay they were well behind the game and the capacity crowd urged the home team onwards. 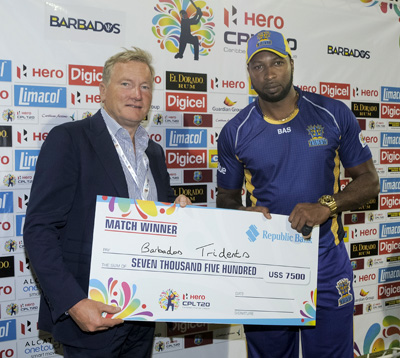 Kieron Pollard then brought himself and Peterson onto bowl and the Tridents’ choked the Amazon Warriors middle-order as the required run rate quickly spiralled and the pressure built. Wickets fell at regular intervals and the fervour in the stadium grew with every over as the Tridents’ victory became increasingly certain.

Pollard himself took 2-20 but all the Tridents’ bowlers were impressive as the Warrior’s run-chase wilted, leaving the crowd to celebrate during the final few overs before the last rites were concluded.

Earlier on it was Pollard who played a key role with the bat, his 26-ball 48 was the fulcrum of the Tridents’ innings and hauled his team from a slow start which saw them record just 30-2 in the Powerplay to what ultimately proved to be a winning total of 158-6.

Pollard was assisted ably by Shoaib Malik who although never cut loose played a valuable role in steadying the Tridents innings when it could’ve folded, scoring 39 from 35 balls.

The Amazon Warriors started the match excellently, bowling very well in the Powerplay. Veerasammy Permaul in particular bowled some canny lines and made the Tridents work for their runs.

It was Sunil Narine who was the pick of the Guyana Amazon Warriors bowlers however, taking 2-22 including the wickets of Malik and Jonathan Carter, who scored 25. Narine’s mastery threatened to derail the Tridents’ recovery in the middle-overs but in the end Pollard scored enough runs before his bowlers bowled well enough for it not to matter.

The Biggest Party in Sport is back – and the Tridents mean business.