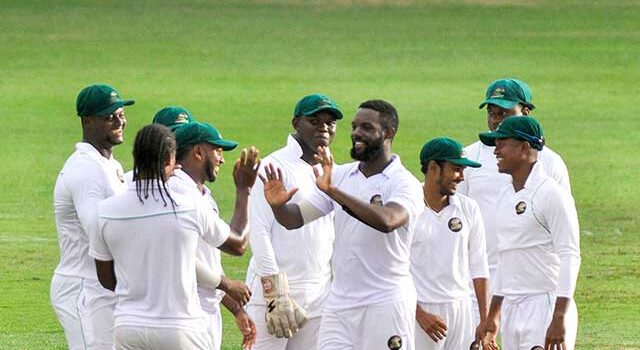 By Ravi Madholall
Guyana Jaguars already started to roar having snapped up a comprehensive ten-wicket victory over Leeward Islands Hurricanes in the 2020 opening round of the regional 4-day tournament last weekend.

The double-round format allows the six traditional regional teams to feature in ten matches, precisely playing each other twice and Guyana Jaguars have been unprecedented by lifting the coveted cup on every occasion.

What had transpired in that first-round encounter on the Island of Antigua at the Sir Vivian Richards Stadium, is a continuity of dominance by the contingent of Guyanese cricketers.

Once again the winning admiration reflects the shrewdness of Leon Johnson, a test batsman who has been at the helm ever since.

Taking first strike on a responsive pitch, Guyana Jaguars racked up a formidable 388 all out and then dismissed Hurricanes for a moderate 154 which necessitated the follow-on.

The hosts reappeared in a more determined manner nonetheless having scored 254 all out leaving the Jaguars to get a trivial target of 24.

Notably, there were several, sterling, individual performances and a manifestation of cohesion in the team as well.

When Guyana Jaguars batted, dynamic all-rounder Christopher Barnwell hit a boundary-studded 82 to be the leading scorer. The right-hander demonstrated a great degree of belligerence despite the longer version while openers Tagenarine Chanderpaul and Chanderpaul Hemraj characteristically played resolutely to make 60 and 52 respectively.

Johnson also maximized on the weakened Hurricanes’ bowling attack by contributing 59 before lower-order players Raymond Reifer, a versatile all-rounder, made 47 and leggy Devendra Bishoo with 40.

Hurricanes put in a more gallant effort, thanks to discarded West Indies opening batsman Kieran Powell, who hit a responsible 99 in the second innings. Like in the first innings, Permaul, a veteran at the first-class level, grabbed three wickets while left-arm seamer Reifer also proved too hot to handle by snaring three wickets as well.

No doubt the Jaguars are highly confident and ready to clash with their bitter-rivals Barbados Pride from Thursday at the Kensington Oval, Barbados.

It was a terrible start for the Bajans who suffered a three-wicket defeat at the hands of the less-fancied Windward Islands Volcanoes at the Arnos Vales Stadium, St. Vincent and Grenadines.

Coming up with contrasting results should still entice a fierce battle between these two cricket-powerhouse nations. Barbados had regional success abundantly after the inauguration of first-class cricket in 1965. They still have the dignity of winning the most title twenty times and one was shared.

Barbados Pride will certainly take out some positives from that loss as Kyle Mayers scored a century (106) while West Indies opener Kraigg Brathwaite made 72. Another international representative, left-arm spinner Jomel Warrican had a seven-wicket match-haul.

The two other competing teams in the competition are: Trinidad and Tobago Red Force and Jamaica Scorpions.