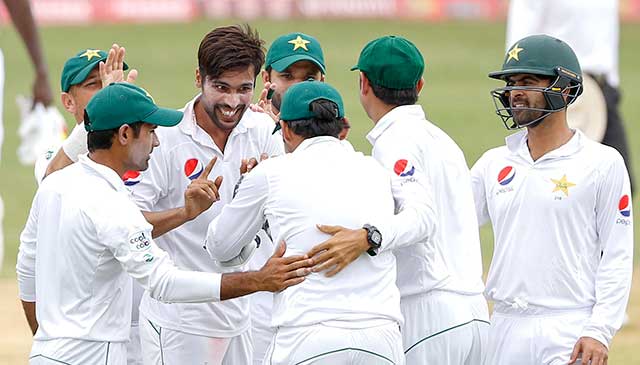 Pakistan celebrates the fall of a wicket during the first test against West Indies. WICB Media Photo/Athelstan Bellamy

By Ravi Madholall
Despite the first three consecutive days were affected by rain, Pakistan still proved their superiority over West Indies to hall in a comprehensive seven-wicket win in the first test which concluded last Tuesday at Sabina Park in Jamaica.

Undoubtedly the tourists are brimming with immense confidence and would be anxious to churn out a historical victory in the second and penultimate encounter starting on Sunday in Barbados.

The Pakistanis have not been able to win a test series in Caribbean for the past 27 years and that marks the significance of a win at the famous Kensington Oval.

If the monumental accomplishment is achieved, the euphoria and celebrations would be understandable as the regional side had been one of the most dominant teams since the inception of test cricket.

The eagerness and resilience were palpable from the Pakistani players who came out and immediately displayed those two factors with enormous enthusiasm in abovementioned opener venue.

They dismissed the hosts for 286 and then rattled up a formidable 407. West Indies were unable to handle the spin-pace combination and folded meekly for 152 leaving Pakistan with a trivial 33 runs to seal off an auspicious commencement to the series.

The pitch played to its fullest potential of being responsive but lack of application from the hapless batting department thoroughly responsible for their defeat at the hands of some fine and penetrative bowling.

Butter-flies in the stomach of debutants Shimron Hetmyer (11&20) and Vishaul Singh (9&9) were clearly understandable while several players have still been rookies at this level, certainly epitomized the Caribbean Boys’ susceptibility against an experienced and quality Pakistan side.

Among them are middle-order batsman Shai Hope and their seasoned opener Kraigg Brathwaite who failed to make an impact. The return of Kieran Powell was tentative but he batted with a great degree of maturity but subsequently more challenges await him.

The talented all-rounder Roston Chase again came to the rescue but he and his Barbadian compatriot wicketkeeper/batsman Shane Dowrich appeared resolute with a fine partnership but it proved futile.

The bowling badly lacked consistency and once it continues the Pakistan senior players like Yonis Khan, Misba-ul-Haq among others would be more than delighted to cash in.

Trinidadian pacer Shannon Gabriel bowled his heart out and got little success but the bowling unit must come to the fore and a lot depend on leg-spinner Devendra Bishoo to make an impression on a surface which promises to be typically animated as well.

His counter-part Yasir Shan was incisive and utilized the deteriorated track to good effect that he was able to produce a player-of-the-match performance having snared six wickets in the second innings.

The pacemen, Mohammad Amir and Mohammad Abbas, who made his debut in Jamaica, lived up the expectations of being intimidated.

Toss
Since the beginning of the tour of the Caribbean with four T20s and three limited-overs chronologically, the toss has become an essential component. The chase of targets is the mantra because of the decisions a captain can make without hesitation.

In the opening test game, Pakistan won the toss and inserted the oppositions to take first strike and the bowlers capitalized on a pitch that had plenty of moistures. Pakistan captain ul-Haq knew once the West Indies batsmen have come under pressure, victory can be cheap on that occasion. How it work in Barbados is left to be seen as West Indies skipper Jason Holder hoping to call correctly.

This final test will be played in Dominica. Pakistan won the T20 series 3-1 and also claimed the one-day series trophy by emerging victorious with a 2-1 margin just before the test series.