Hashim Amla Celebrates His Ton Of Tests With Ton

Hashim Amla emulated the performance of Graeme Smith at The Oval in 2012 in scoring a century in his 100th Test match on the opening day of the final Sunfoil Test match against Sri Lanka at the Bidvest Wanderers Stadium on Thursday. 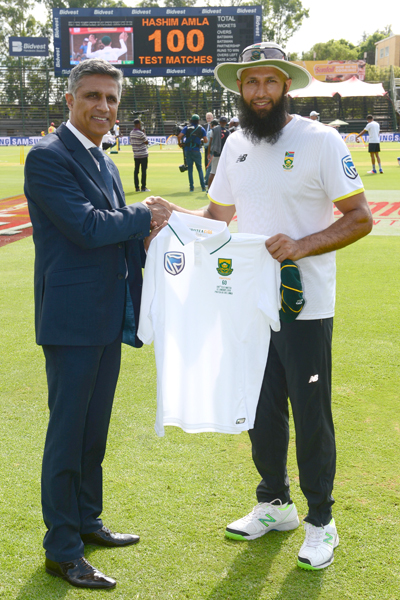 On that famous weekend in London the Standard Bank Proteas achieved one of the biggest victories in the history of Test cricket, winning by an innings after losing only two wickets. That occasion also witnessed Hashim Amla’s unbeaten treble century – the only one ever achieved by a South African – and few would bet against something similar from Amla this weekend.

By the close he had made an unbeaten 125 (221 balls, 16 fours) and shared a third wicket record partnership against Sri Lanka of 292 with JP Duminy (155 off 221 balls, 19 fours). It was Amla’s 26th Test century, one behind Smith, and Duminy’s sixth. It was a second century for both of them against these particular opponents.

The previous best for the third wicket against Sri Lanka was the 204 of Alviro Petersen and Jacques Kallis.

It meant the Proteas, after winning the toss on a lively pitch, had put 338/3 on the board at a very healthy run rate of 3.75.

Just how valuable this partnership between Amla and Duminy was became evident when Sri Lanka took the second new ball and conceded only 25 runs and captured the wicket of Duminy. There was plenty of bounce and seam movement as there had been during the first 30 overs of the South African innings when they lost the wickets of both their opening batsmen.

As Amla stated afterwards it was the sort of pitch on which you felt you were never properly in.

There was one crystal clear statistic. Amla took 60 balls to score his first 20 runs when conditions were extremely difficult and then made the remaining 80 runs needed to reach his century off a mere 100 more deliveries.

Once Amla hit his straps – and he will be the first to acknowledge the contribution of Duminy who kept the scoreboard moving rapidly while he was settling in – there was no stopping him. He should have been dismissed on 4 when Dhananjaya de Silva dropped a regulation gully catch shortly before lunch but, as always, had little problem in putting the memory of that moment behind him.

He played a critical role in making sure that Sri Lanka’s ace spinner, Rangana Herath, never had the chance to settle – 67 runs in 14 overs without a maiden – which put a lot more pressure on the Sri Lankan seamers.

Amla will undoubtedly dominate the day one headlines but on any other day he would have had to share them with Duminy.

As had been the case at PPC Newlands in the previous Test match Lahiru Kumara was the standout Sri Lankan bowler and it remains a mystery that he does not get first crack with the new ball. He made life difficult for the Proteas throughout the day.

The Proteas gave a first Test cap to Duanne Olivier – the 94th South African to represent the Proteas in this format – at the expense of Keshav Maharaj and, judging by the behavior of the pitch to date it was a good decision. Olivier got his first taste of life at this level when he was sent in as night watchman after Duminy was dismissed.

Faf du Plessis underlined his highly encouraging captaincy style when for the second time in the series he opted to bat first on a pitch that was clearly going to help the seamers on the first day at least. It was a tremendous – and justified – vote of confidence in his top order. His bat first policy will certainly go down well with cricket purists around the world.