By Sandipan Banerjee
ICC Cricket World Cup 2015 has finally reached its business end. The Trans-Tasman rivalry will resume when two co-hosts, Australia and New Zealand will lock horn in the title clash at Melbourne Cricket Ground (MCG). A fierce team, home conditions, crowd support and prior experience of playing in a ‘Big Game’ have projected Michael Clarke’s boys as clear favorites. But will it be so easy for them against the rejuvenated Kiwis? Sandipan Banerjee does not think so. 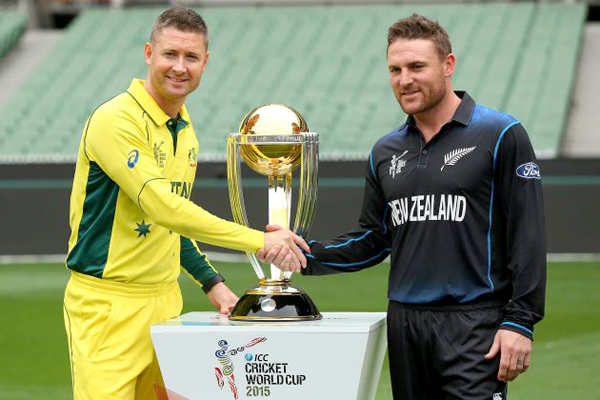 Remember, Simon Taufel, who won ICC’s ‘Umpire of the Year’ award five times in a row? While receiving one such award, Taufel mentioned that the only regret he had about his career was not being to officiate in a World Cup final because of Australia’s continuous presence in the final since 1996. India eventually obliged him in the last edition of World Cup and knocked the Aussies out, which helped Taufel to fulfil his wish.  PREVIEW: Australia (AUS) vs New Zealand (NZ) ICC Cricket World Cup 2015 FINAL

Australia and World Cup final has been like synonyms over the past two decades. Seven-time finalists (including the current edition) and four-time winners — the records speak for themselves. Also, since 1999, every time the Aussies reached final, they simply muscled their opponents. Pakistan (1999), India (2003), and Sri Lanka (2007) were no-contests. After a gap of one edition the Aussies are back in business again. This time, however, the final will not be as easy for them against their Trans-Tasman rivals.  SCORECARD: ICC Cricket World Cup 2015 Final Australia (AUS) vs New Zealand (NZ) at Melbourne

New Zealand is the only side who have managed to remain unbeaten in this tournament so far. Under the inspirational leadership of Brendon McCullum, they have played a different brand of cricket — something one can relate only to Ricky Ponting‘s Australia at their peak.  STATS PREVIEW: Australia (AUS) vs New Zealand (NZ) ICC Cricket World Cup 2015 FINAL

The Kiwis have come to ICC Cricket World Cup 2015 with every base covered.  A power-packed batting, supported by an in-from bowling that can deliver goods in any situation against any opponent. Above all, this team has the self-belief and determination and are, most importantly, not afraid of losing. The typical Australian mind-games ahead the mega-final will not affect the Kiwis. Remember Sri Lanka of 1996?

The most talked-about topic ahead of the final is that the fact that New Zealand will be playing their first match outside New Zealand for the first time in this World Cup — a fact that can affect their confidence. However, this particular bunch of Kiwis has the capability to succeed even in alien conditions. Their recent tour of United Arab Emirates (UAE) proves that. So there is no reason why they cannot do well in the other side of Tasman Sea.

The stage cannot be bigger for these 15 New Zealanders — men who have probably grown up dreaming of this moment. Playing against the arch-rivals will be the extra motivation. Martin Crowe could not do it in 1992. But Brendon McCullum and co. won’t let it go this time around.  ICC Cricket World Cup 2015 final could be the last match I see, says Martin Crowe

(Sandipan Banerjee is a reporter at CricketCountry. Cricket has been the biggest passion for him since his childhood. So, when it came to choosing his career, he chose to turn his passion into his profession.