Jamaica Tallawahs bound star all-rounder Shakib Al Hasan is relishing the prospect of being a part of the fourth edition of the HERO Caribbean Premier League (CPL) this summer and believes that the Tallawahs are primed to compete for the coveted title when the tournament begins on 29 June. 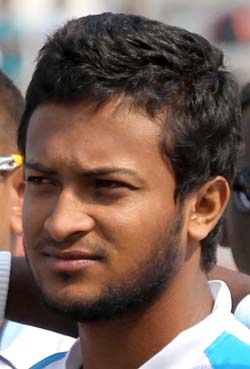 Since making his international debut back in 2006, the 29-year-old has been one of the world’s leading all-rounders across all three formats.

Shakib currently lies in 15th place in the official ICC T20 bowling rankings and 27th in the batting standings and has previous experience of the biggest party in sport having featured in the Barbados Tridents back in 2013. In eight CPL matches that year for the Tridents, he took 11 wickets at a miserly economy rate of 5.7, and will feature in a squad this year brimming with local talent in the likes of Chris Gayle and Andre Russell as well as international stars Kumar Sangakkara and Dale Steyn.

Currently starring in the IPL with Kolkata Knight Riders, in an exclusive interview with www.cplt20.com Shakib said: “My wife wants me to play CPL because we get to see all the Caribbean islands, which are beautiful! I’m looking forward to it. I think we have a very good team, we now have to put our performances together, play as a team and win games.”