By Arunabha Sengupta
Steve Camacho, who died on October 2, 2015, played 11 Tests for West Indies as a bespectacled opening batsman and was a member of cricket administration for 18 years. Arunabha Sengupta pays homage to the man who was the first full-time employee of the West Indian Cricket Board (WICB). 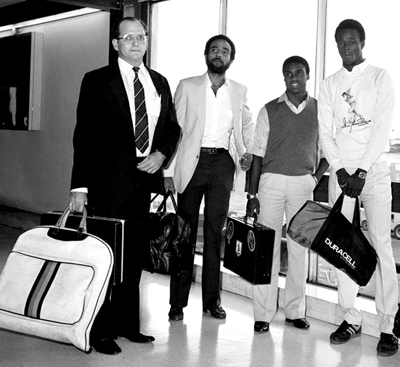 It was apt that Steve Camacho, with his scholarly looks behind glasses as he batted for Guyana and West Indies, would end up in one of the most responsible of positions of Caribbean cricket.

His cricket career was at best ordinary. Of course, there was merit in his studious application, else one could not have fit in the great Guyanese batting line-up which included men like Rohan Kanhai, Clive Lloyd, Basil Butcher, Alvin Kallicharran, Roy Fredericks, and, during his early days, Joe Solomon. But his forays at the wicket brought him just 7 hundreds from 76 First-Class matches, and ended with a career average of 34.86.

Nevertheless, he was a solid, technically correct opening batsman with loads of patience. His bloodline had plenty of veins throbbing with zest for the game. Camacho’s grand-father GC Learmond played for British Guiana, Trinidad and Barbados in the inter-colonial matches, and also represented West Indies in England during the tours of 1900 and 1906. His father George Camacho captained British Guiana in three matches, and was a decent left handed batsman who also bowled medium pace. Uncle Angus Learmond also played First-Class cricket.

When the Australians toured the islands in 1965, young Camacho showed plenty of glimpses of his potential by scoring 157 for Guyana Colts against the tourists. Steady runs in the following seasons led to his selection in the Test side against Colin Cowdrey’s Englishmen in 1968-69. Opening the batting, first with Seymour Nurse and then alongside MC Carew, he gave a pretty good account of himself. In the Queen’s Park Oval Test, he scored 87 — to remain his personal best — while West Indies lost by 7 wickets due to a strange declaration by Garry Sobers.

In 1969, touring England, he managed two half-centuries in two Tests at Lord’s and Headingley.  But, loss of form against the touring Indians in 1971 signaled the end of his Test career.

Camacho carried on playing for Guyana till 1979, but never really got closer to the Test side with Gordon Greenidge, Fredericks and finally Desmond Haynes vying for the opening slots. His Test career saw him score 640 runs at 29.09.
However, cricket administration was a completely different ball game where he found his forte. Spotted early for his administrative acumen, he found a mentor in the great Clyde Walcott.

He served the Board under the presidencies of Jeff Stollmeyer, Allan Rae, Walcott and Peter Short. In fact, his days in office coincided with the dominance of West Indies in world cricket. He was also the manager of West Indian teams of the period and also served as selector.

After retirement, he wrote the book Cricket at Bourda: Celebrating the Georgetown Cricket Club.

Suffering from cancer for a long time, Camacho passed away at his home in Antigua on October 2, 2015, a mere 13 days before his 70th birthday.

(Arunabha Sengupta is a cricket historian and Chief Cricket Writer at CricketCountry. He writes about the history of cricket, with occasional statistical pieces and reflections on the modern game. He is also the author of four novels, the most recent being Sherlock Holmes and the Birth of The Ashes. He tweets here.)