Cricket South Africa (CSA) today named the eight international marquee players who will be representing the various franchises in the first two years of the #T20 Global Destination League which gets underway later this year. 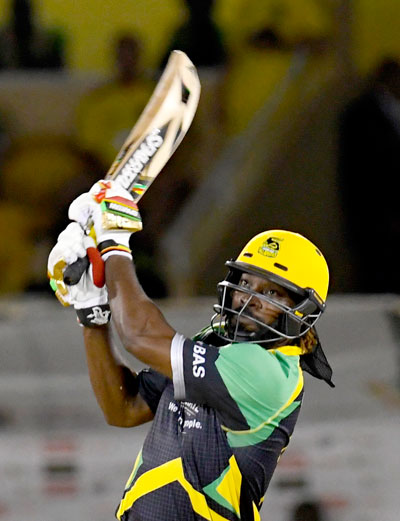 Chris Gayle is one of the marquee player in the Global Destination League hosted by Cricket South Africa. Photo: CPL

The eight international marquee players will be entered into a mini-draft with the highest bidding franchise owner having first pick and the rest following the same process. Franchise owners will be asked to consider the fact that some of these players, by virtue of having played for some years in South Africa, already hold strong ties to certain cities in South Africa.

Each franchise team will also be allocated a Proteas marquee player.

“We are thrilled by the calibre of the top eight international players we have lined up to participate in our new #T20 League, commented CSA Chief Executive, Haroon Lorgat. “They are all stars in their own right and will add great value to the franchise teams they will represent.

“This top quality list of players will set a high standard for our tournament. With each one of them a household name in the world of cricket, we can certainly look forward to some enthralling contests that will grip the imagination of fans in South Africa and around the globe.

“Coming from four different continents these players confirm the global interest we have already seen. No doubt this will grow as other international stars register their interest to participate in our new #T20 League.”

“The high level of interest from players and sponsors to participate in our league is proof of the great attraction of South Africa as a global destination. This is indeed very exciting for the country,” added Mr. Lorgat.

Kevin Pietersen commented: “I am delighted to have signed for the new Global Destination T20 tournament in South Africa. South Africa, as everyone knows, is very close to my heart. So being a part of something innovative in their cricketing structure really excites me. I am sure the public will support this wonderful creation which will showcase a lot of the world’s best players.”

Chris Gayle commented: “I look forward to returning to South Africa as I have very happy memories of my time there. This included scoring the first ever century in T20 International cricket when the inaugural ICC World Twenty20 was held in South Africa in 2007.”

Brendon McCullum commented: “I very much enjoy the conditions in South Africa and it was an easy decision to make myself available for this tournament. I enjoy the way South Africans play the game and the way their fans interact with the players as well.”