The West Indies broke Bangladeshi hearts with a thrilling three-wicket win over the host in Mirpur on Thursday to set up the title clash with India in the ICC U19 Cricket World Cup.

Shamar Springer followed his two for 36 with an unbeaten 62, which steered the West Indies past Bangladesh’s 226 all out with eight balls to spare in front of thousands of dejected home fans.

The West Indies, which had also reached the final when the tournament was staged in Bangladesh in 2004, will meet an undefeated India for the title in Mirpur on Sunday, 14 February. This will be the first-ever final between the two sides at the age-group level.

Bangladesh skipper Mehidy Hasan top-scored with 60, reviving the innings with a 85-run stand for the sixth wicket with Mohammad Saifuddin (36), after half the side had been dismissed for 113 runs.

The West Indies lost wickets regularly to keep Bangladesh in the hunt till Springer built on skipper Shimron Hetmyer’s half-century to record a memorable victory. 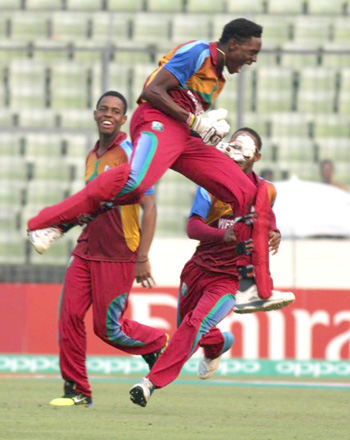 Bangladesh, electing to bat on a misty morning, lost openers Pinak Ghosh and Saif Hassan by the seventh over to make it 27 for two. It then slipped to 88 for four after star batsman Nazmul Hossain was dismissed for 11 and Joyraz Sheik fell for 35.

Mehidy hit seven boundaries in Saifuddin’s company before both the batsmen fell off successive deliveries by seamer Keemo Paul.

Gidron Pope provided the West Indies a swashbuckling start by taking 14 of the first over bowled by Mehidy before racing to 38 off 25 balls, which included five fours and a six.

West Indies moved to 177 for four, needing just 50 more runs in 13 overs, when left-arm spinner Saleh Ahmed turned the game around with two wickets in the 38th over.

Springer kept his end up and punished the loose balls before ending the match with two consecutive boundaries through the covers off Saifuddin.

“It’s a great feeling and an even better feeling to be in the final, a dream come true,” said Springer. “It was quite a challenge out there, but I just backed myself to do well.”

Added Hetmyer: “Credit to the bowlers for not allowing Bangladesh to run up a big score. It was a good wicket to bat on, but we did well to keep them down to 226.

“Springer was excellent as always. We lost quite a few wickets, but as long as Springer was out in the middle we knew we had a great chance.

“We are very excited about playing India in the final. It will be a very good contest.”

Mehidy rued the lack of runs by the batsmen, but praised the team for giving the West Indies a good fight.

“It was a slow pitch, but 226 was not enough,” the Bangladesh captain said. “But I am happy with the way the team fought till the end. Till the last boundary, we thought we could win it.

“We are disappointed that we could not give our fans a win, but our biggest achievement was to reach the semi-finals for the first time. We will still try to finish third in the tournament.”

Meanwhile, Namibia defeated Nepal by 15 runs in Fatullah to finish seventh in the 16-nation tournament, a marked improvement from its 14th place two years ago.

Lohan Louwrens and Michael van Lingen hit half-centuries to steer Namibia to 225 for nine after it elected to bat in a match reduced to 45 overs a side.

Nepal made a gallant chase before being all out for 210 in the final over with opener Sunil Dhamala making 59. Fritz Coetzee claimed three wickets.

Canada took the 15th spot with an eight-wicket win over Fiji in the battle of the wooden spooners in Cox’s Bazar.

Miraj Patel claimed four for 16 and Shlok Patel took three for 18 as Canada bowled out Fiji for 83 and then surpassed the modest target in 20 overs with opener Akash Gill making 38 not out.