West Indies rode on its fast-bowling arsenal to win the ICC Under-19 Cricket World Cup for the first time with a tense five-wicket victory over three-time winner India in the final in Mirpur on Sunday.

The pace trio of Alzarri Joseph, Ryan John and Chemar Holder shone on a spicy, moisture-laden pitch to demolish India’s fancied batting line-up for 145 after electing to field.

Sarfaraz Khan played a lone hand for the Rahul Dravid-coached Indian team with 51, his fifth half-century in six matches, as Joseph and John picked up three wickets each and Keemo Paul two.

West Indies slipped to 77 for five in reply against the steady India attack before Keacy Carty (52 not out) and Paul (40 not out) put on 69 for the unfinished sixth wicket to steer their team home with three deliveries to spare. 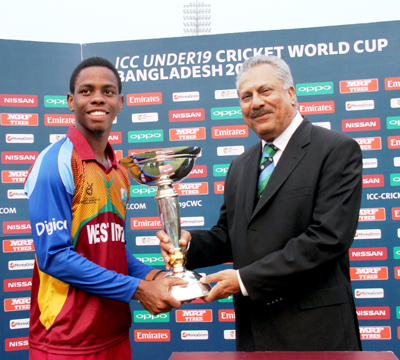 It was the first major title for the West Indies at any level since Darren Sammy’s senior team won the ICC World Twenty20 in Sri Lanka in 2012.

“We were not supposed to be the champions, but we did it,” he said. “I feel good, words can’t explain how good I feel. The way the guys played showed how much we wanted to win the tournament.

“The pace bowlers used the pitch to their advantage and helped each other to keep the pressure on the Indians. Coming from the Caribbean, we did not expect such pitches in Bangladesh.

“I am delighted for both Carty and Paul. They are aggressive players but they adjusted to the situation and kept a calm head.”

It was only the second defeat for India in the last 22 matches, ending an unbeaten run in the tournament.

“I feel sad today because we wanted to win badly,” said India captain Ishan Kishan. “It was not easy to bat out there in the morning because their fast bowlers really used the conditions well.

“We needed partnerships which did not happen. I thought our bowlers did well but our fielding let us down, including some dropped catches. We certainly should have fielded better.”

Dravid complimented the West Indies and said the defeat will serve as a good lesson for his young wards.

“I am disappointed for them. It is tough for these young kids to lose a final,” the batting great said. “But hopefully this is the start of a journey for them and every experience is a learning curve.

“We have tasted a lot of success with this team. Unfortunately, the only loss for them was the biggest game they have played.

“Hopefully they can go on to become better people, better cricketers. That is the real purpose of this tournament.”

Asked the reason for the West Indies success, Dravid said: “You have to give credit where it is due. I thought they bowled really at good lengths and good lines.

“They maintained pressure right through the innings. At no stage did we feel they were giving us easy balls to hit.

“But I am proud of the way our team came back and tried to defend the total till the last over. Sitting outside that really made me very proud.”

The next edition of the tournament will be held in 2018 in New Zealand with seventh-placed Namibia, the highest-ranked Associate member, qualifying directly along with the 10 Test playing sides.

The remaining five qualifiers in the 16-nation tournament will be determined through regional qualifying competitions.

Joseph ripped through the top-order in sensational fashion in the morning with the wickets of in-form opener Rishabh Pant, Anmolpreet Singh and Kishan in his first four overs.

From 27 for three, India slipped to 50 for five in the 18th over as Washington Sundar and Armaan Jaffer were caught off mistimed drives.

Hetymer bowled out Joseph’s ten overs by the 27th, at which stage India had managed just 84 runs for the loss of five wickets.

Holder, on the other hand, kept one end tight, conceding just 15 runs in his opening spell of eight overs.

When Holder returned for his second stint in the 30th over, he struck with the first delivery to break a 37-run partnership for the sixth wicket between Sarfaraz and Mahipal Lomror (19).

Sarfaraz was eighth out at the total of 120 in the 39th over when he missed an attempted pull off John and was leg-before wicket.

India was down to 123 for nine before Rahul Batham and Khaleel Ahmed added 22 valuable runs for the last wicket.

West Indies also began its reply badly, losing openers Gidron Pope and Tevin Imlach by the eighth over with the score at 28.

Carty and Hetmyer carried the total to 67 for two when left-arm spinner Mayank Dagar turned the game around with three wickets for the addition of just 10 runs.

But, Carty and Paul curbed their natural aggressive instincts to calmly turn the final their team’s way again.

India was left to rue two dropped catches, the first by Sarfaraz when Paul was on 10 and the other by wicketkeeper Pant off Carty when the batsman was on 35. Dagar was the unlucky bowler on both occasions.