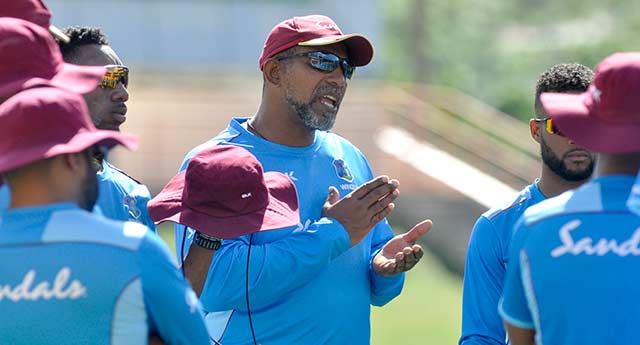 By Ravi Madholall
Sri Lanka and West Indies, currently ranked at number 8 and 9 respectively, should provide some entertaining cricket from Saturday as they set to kick off the limited-over three-match series in the former territory.

After suffering a defeat in their first warm-up match, the visitors bounced back to win the second game reeling off some outstanding individual performances to give themselves a great amount of motivation in this much-highly anticipated rubber.

West Indies, recently at home, whitewashed the less-fancied Ireland, 3-0 in this 50-over format and several of the top-notch players exhibited high confidence in their respective capacity; they might be more and than anxious to replicate them against a stronger opponent.

Sri Lanka might hold a slight advantage, psychologically, having won the last one-day series when they met five years ago on home soil.

However, head-coach Phil Simmons of West Indies spoke enthusiastically about his side’s progress over the past several months and strongly believes the boys have got great momentum to be the top team by the completion of the series.

“For the last three months we’ve been trying to build both our white-ball teams,” Simmons said. “We’re looking at improving. And [at the end of this tour] if we’ve gotten better than we were in India then we could be walking away with the series,” the Trinidadian Simmons told famous cricket website Cricinfo.

“I think during the series we played well, but we just had to improve our bowling. We’ve been working hard on that, in terms of getting more wickets in the middle overs and things like that. I think we’ve improved and we’ll see what happens in this series,” he added.

During the preparations period, skipper and the energetic all-rounder Kieron Pollard stated that the team is there to compete hard against a quality Sri Lanka lineup which possesses some senior players.

According to Pollard, who is known to be a belligerent batsman and clever medium-pacer, the talent is there and the players are showing wonderful enthusiasm and passion to come out as the best unit.

When the Caribbean boys clashed with a local team in the first outing, their returning seasoned middle-order batsman Darren Bravo registered an even century before he was retired hurt while Roston Chase, a prominent all-rounder in the side, hit an attacking 136 to spur West Indies to victory over a Sri Lanka Cricket Board President’s X1 in the second game.

As much as the batting sparked with a great degree of dominance, the bowling remains concerning after they would have conceded over 250 runs on both occasions.

The batting obviously will center around Bravo despite he was dropped for the home series against Ireland earlier this year, the inform and consistent Shai Hope, who made a fluent 82 in the second and final practice game, Sunil Ambris, who batted well both times despite a significant contribution, the reliable Nicolas Pooran and the pugnacious Pollard.