The West Indies took the last quarter-final spot in the ICC U19 Cricket World Cup Bangladesh 2016 with a thrilling, but controversial, two-run win over Zimbabwe on Tuesday that gave it second place in Group C behind England.

Zimbabwe, chasing the West Indies’ 226 for nine, began the last over needing just three runs to win with one wicket in hand amid mounting tension in Chittagong.

But, West Indies seamer Keemo Paul whipped off the bails before sending down the first ball, catching non-striker Richard Ngarava out of his crease. The decision was referred to the TV umpire who declared Ngarava run-out.

The last-wicket incident proved an anti-climax to what had been an absorbing do-or-die contest between two valiant teams attempting to nail a quarter-final berth. The match was produced by ICC TV and aired around the world by 15 broadcasters

Zimbabwe, in its run-chase, was reduced to 147 for six following a four-wicket haul by fast bowler Alzaari Joseph, before Adam Keefe (43) and Wesley Madhevere (21) led a remarkable fightback by adding 62 runs for the seventh wicket.

Shamar Springer, who had top-scored with 61 in the West Indies innings, turned his team’s hero with the ball by dismissing both batsmen to finish with two for 16 in four overs.

The West Indies will take on the winner of Wednesday’s last league match between Pakistan and Sri Lanka in the fourth quarter-final in Fatullah on 8 February, while Zimbabwe will play Canada in the Plate Championships quarter-final in Cox’s Bazar on 5 February.

West Indies coach Graeme West admitted it was a tight match: “It got very tight and we knew that this was a game that was always going down to the wire. A bit of nip and tuck. It (the finish) was certainly not something we had envisaged. 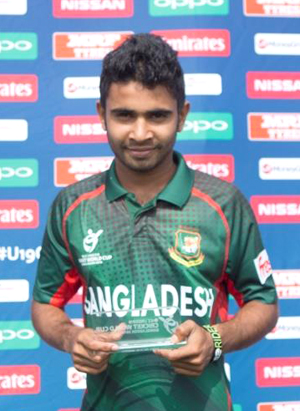 Saleh Ahmed of Bangladesh who picked up 2-10 against Namibia. Photos: ICC

“I can imagine what they (Zimbabwe team) must be going through now. I feel sorry for them because they got themselves into winning positions and then we pulled it back. I share their disappointment.

“Our objective was to progress to the quarters and doing that after a tense game was very pleasing. We are still not there and have to take care of the little things that we are not doing right at the moment.”

Zimbabwe coach Stephen Mangongo said he was happy with the way his side had fought in the match. “I am proud of my boys. Restricting the West Indies for 226 on a batting-friendly wicket was a good performance and we were up for the chase. And like any other games, we lost quick wickets under pressure.

“I am disappointed with the way the game ended. I have debriefed the boys in the dressing room and they were all crying. We have explained that technically the run-out is legal. We left it to the last man and we should not have done that. It was a hard lesson and they have learnt it the hard way.”

Meanwhile, Bangladesh topped Group A with an eight-wicket demolition of second-placed Namibia, ending the match in Cox’s Bazar in one session itself.

Namibia was dismissed for 65 in 32.5 overs after being sent into bat by Bangladesh with Saleh Ahmed, skipper Mehidy Hasan and Ariful Islam claiming two wickets each.

Bangladesh lost Pinak Ghosh in the first over, but an unbeaten 34 from Joyraz Sheik steered the host to an easy victory in the 16th over.

Bangladesh ended the league with three successive wins and will now play surprise qualifier Nepal in the first quarter-final in Mirpur on 5 February, while another qualifier Namibia, which knocked out defending champion South Africa, will take on India on Saturday in Fatullah for a place in the semi-finals.

Saleh said the comfortable victory had made him and the rest of the team hungry for more.

“We not only want to defeat Nepal in the quarter-final, but also win the semi-final and the final. We want to be the world champion,” he said.

Namibia captain Zane Green rued his team’s bad batting but vowed to put up a better show against India.

“It was not our best batting performance and a total of 65 was always going to be too little to defend,” he said. “We should have added at least 100 more runs to make it competitive.

“But we will stay positive against India and will not back down.”

South Africa finished third in the group after a 10-wicket rout of Scotland in Cox’s Bazar, the first win in the tournament for skipper Tony de Zorzi’s men.

The South Africans raced to victory in 29 overs without losing a wicket as openers Kyle Verreynne and Liam Smith returned unbeaten with identical scores of 64 not out and in the same number of deliveries (87).

In the Plate Championship quarter-finals, South Africa will play Ireland on Thursday and on the same day, Scotland will meet New Zealand.

“It was good to bounce back in the tournament,” de Zorzi said. “We still have a job to do in the matches coming up so it was good to get a win under the belt.

“The guys have shown immense character and responsibility, knowing that we have a lot of people to play for at home. We could not get the results we wanted but we still wear our colours with pride and honour.

“We are definitely determined to win the Plate Championships. The boys know we have a job to do.”