A fantastic innings of 62 from 44 balls from Darren Bravo was not enough to secure victory for the Trinbago Knight Riders against the St Lucia Zouks in the opening fixture of the 2016 Hero Caribbean Premier League (CPL). 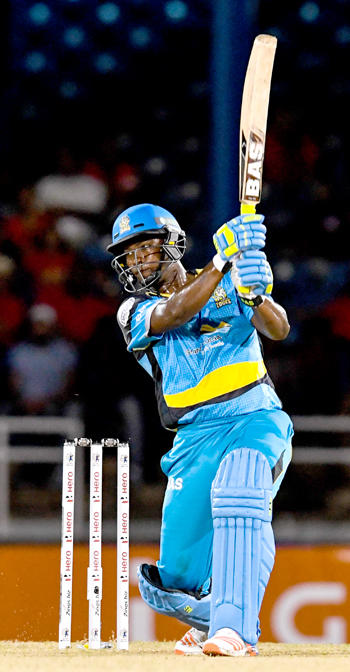 Johnson Charles made a fifty for the Zouks before the experience of Michael Hussey and David Miller saw their team home against the reigning Hero CPL champions.

In tricky bowling conditions with dew making the ball extremely wet it was hard for the Zouks to find control with the ball in the first innings of the match, but they had done a fine job at keeping the Knight Riders scoring in check until the last two overs. It was from there that Darren Bravo launched his assault that on another day would have been match winning.

At the start of the 19th over Darren Bravo was on 34 from 35 balls, it had been an innings of patience and it had held the Knight Riders’ effort together, but it was far from explosive. That changed in those final two overs as he scored 29 runs from nine deliveries, with Bravo hitting three sixes in the last two overs.

At the halfway point it seemed that the Knight Riders were favorites with a very decent score on the board, but the Zouks found batting much easier right from the start. While Trinbago had struggled to find a way to time the ball well on this pitch the St Lucian side did not have the same problem inside the batting PowerPlay. Shane Watson and Johnson Charles got the visitors off to the best possible start as they put on a partnership of 47 in 35 balls.

That stand was broken by Dwayne Bravo with a slower ball that Shane Watson chipped to mid-off via a leading edge. The Knight Riders would have hoped that the fall of Watson’s wicket would bring that back into the match, but Charles had other ideas. He reached 52 and looked completely untroubled when he reverse swept Sunil Narine and he was brilliantly caught by Brendon McCullum. The umpires could well have called the delivery a no ball but Narine was given the benefit of the doubt.

With a bowler like Narine in your ranks you will always feel that you are in the game and when he picked up the wicket of Andre Fletcher in his next over the Zouks position looked less assured. The fall of Fletcher’s wicket brought together the hugely experienced pair of Michael Hussey and David Miller with 59 runs still needed at just over eight an over. They combined to put on 43 of those before Darren Sammy finished the job after Hussey was bowled by another Dwayne Bravo slower ball.

Miller seems to have re-found his form at exactly the right moment for the Zouks and for the Hero CPL as they ran out winners by six wickets with five balls to spare.