Adil Bhatti who has been capped 14 times for the USA was delighted to spend time in the nets with some legendary cricketers, during the Cricket All Stars recent US tour. The 31-year right-hander batsman and medium-pacer expressed his appreciation for the advice he received from legends Sachin Tendulkar, Wasim Akram and Jacques Kallis. 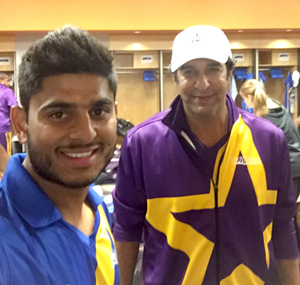 What is your most cherished moment being around the All Stars?
The moment when I was bowling in the nets to Jacques Kallis and Sachin Tendulkar was standing at the umpire stand watching me run in to bowl. After I bowled, Wasim Akram was right there giving me advice. It was very a special moment. Equally showing up, sharing the locker room, dugout, and being a water boy on game day.

Among the players, who was your childhood idol and why?
My childhood idol is Saeed Anwar, but if I have to pick someone who was present then it would be Wasim Akram. The fact that he has so much control over the ball, where he is able to do anything with it, and being a lefty made it the icing on the cake.

How receptive were the All-Stars toward you?
The players were friendly when I approached them. They were smiling and laughing, which made it so easy for me to interact and enjoy.

Which player gave you the best advice, and what was it?
I chatted with Curtly Ambrose who suggested running a lot as it helped him. I couldn’t miss the opportunity to speak to Jacques Kallis who is an all-rounder like me. I went to Kallis on three occasions (for pic, autograph, advice) and he was very welcoming. I was truly amazed. I ended up talking to him for sometimes about how much time he spends on batting and bowling. 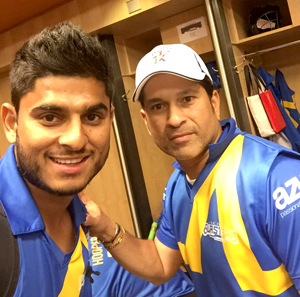 Here is Adil taking a selfie with Sachin Tendulkar.

How many selfies and autographs did you get, and from which players?
I am guilty for taking quite a few selfies. Lol. I am blessed to have signatures of the all the players. However, I will put that bat up on auction to raise money for a good cause.

What have you learned from the experience of being around so many legendary cricketers?
It was once in a lifetime opportunity and I would like to thank Robin Singh and USACA for inviting me to experience it. They turned the atmosphere around them so much fun and enjoyable while competing.

Do you believe cricket in the USA will advance because of the All Stars Tour of America, and if so, how will it?
I know there is so much more they can do, etc., but we need to support the world all-stars legends for what they have started. For the New York event I would have gone to Times Square and given away 50 free tickets to Americans, only if they were willing to show up. I am sure there are so many other ways to do this, but we all should take responsibility and do our part as well.