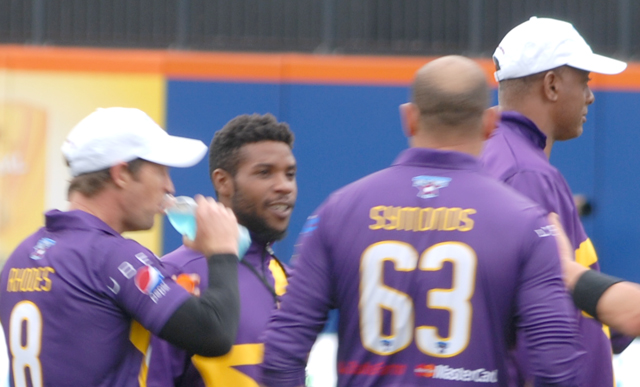 Akeem Dodson (second from left), interacting with players during the Cricket All-Stars game in New York. Photos by John Aaron

Akeem Levar Dodson is a wicket-keeper batsman, and one of a handful of American cricketers who can claim America as their land of birth. He has represented the USA at the Under-19 and senior levels. He has a record for the most dismissals by a wicket-keeper (USA vs. Jersey) in the 2015 ICC World Twenty20 Qualifier in Ireland. USACricketers.com caught up with the outspoken 28 year-old USA wicket-keeper batsman after the recent Cricket All Stars USA Tour.

What is your most cherished moment being around the All Stars?
I got a chance to throw a few balls to Kumar Sangakkara who is someone I’ve always tried to model my game after. To get to see up close how he strokes the ball with minimal effort was a true revelation.

Among the players, who was your childhood idol and why?
It is not something I can say I subscribe to; “idolizing” people, but I would say from a very young age Kumar Sangakkara was always the one I tried to play like. Mainly because we played the same wicket-keeper batsman position, and I would always admire his skill at both positions. 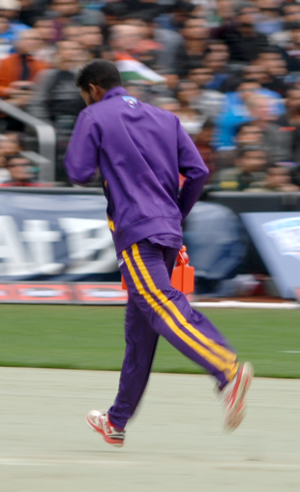 How receptive were the All-Stars toward you?
They were very receptive to everyone that approached them really; personally in these circumstances I prefer to observe and pick up what I can instead of asking lots of questions.

Which player gave you the best advice, and what was it?
In my conversation with Sir Curtly Ambrose, I was able to pick up some useful info that will come in handy in January when I’ll be playing with Team Americas in Trinidad & Tobago for the NAGICO Super50. The advice was on a tactical approach to winning games in the tournament, which I would not care to disclose to the public. Laugh.

How many selfies and autographs did you get, and from which players?
Laugh! I didn’t take any selfies. I think I’m in a few selfies with the incomparable Adil Bhatti but that’s about it. I did get Sachin to autograph a book for one of the young players that play for us at Sheffield CC. The kid, Asif Mahmoud who’s also had a great PSAL season, has a real passion for the game, the book and autograph I felt would be a great motivator for him.

What have you learned from the experience of being around so many legendary cricketers?
Biggest lesson I’ve taken from this experience is that there is no secret formula for being a great cricketer. What it takes is hard work and dedication. And playing lots and lots of cricket.

Do you believe cricket in the USA will advance because of the recent All Stars Tour of America, and if so, how will it?
I believe cricket in the USA will only advance when American cricketers are the ones being put on display, and when the American cricket fraternity recognizes the potential of our own stars and make our home grown talent the legends of tomorrow. I think the All-Star tour will definitely help Cricket USA, but more off the field, in showcasing the marketability of cricket in America. Which is a very important part in the overall development of Cricket USA. But I would say that the advancement of cricket in America is up to us here living the “American Cricket Experience.”