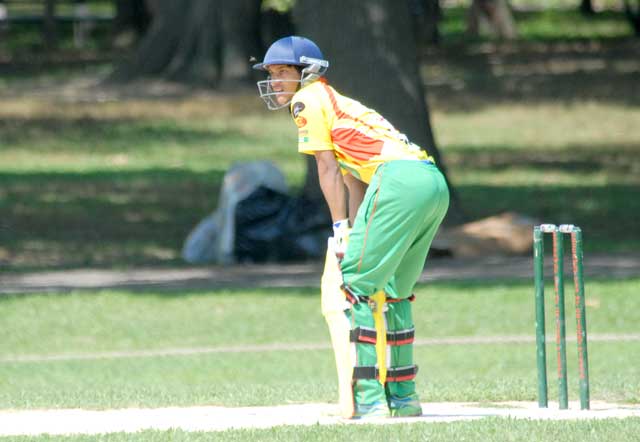 Galaxy opening batsman Akshay Homraj was brilliant in his record knock of 142 against Everest/ACS. Photo by Shem Rodney

By Sam Sooppersaud
The word around is that cricket fans prefer to see bowlers being blasted all over the cricket field by the batsmen. The fans do appreciate a bowler getting a fiver, but the excitement for them is short lived. They have to wait for over after over until the feat is accomplished. However, in a batsman “ripping the bowlers to pieces” the fans are getting continuous gratification. They are constantly kept at maximum excitement. As they say, “T20 is a batsman’s game.” Well, it is the fans’ game also. The original idea behind the “invention” of this format was to create excitement for the folks sitting in the stands. T20 cricket has certainly done that!

For the cricket fans, who prefer to see the batsmen create carnage at the expense of the bowlers, you’ve missed out “big time,” if you were not at The Cage cricket ground last Sunday. It was a semi-final game in the 2017 Eastern American Cricket Association’s (EACA) T20 Tournament. Akshay Homraj, a diminutive opening batsman orchestrated and conducted an assault on the opposing bowlers, the magnitude of which had rarely if ever, been seen at The Cage. The only other batsman, in my mind, to have created such destruction of bowlers was Sudesh Dhaniram. From the first to the penultimate ball he faced, Homraj put on a show of power-hitting. Admittedly, he is small in stature, but, it was clear that he generated his power from his exquisite timing of the cricket ball.

Akshay treated all the bowlers with “equal opportunity,” with all of them sharing in his onslaught. He was so severe that he hit four consecutive bombs off of a Trevor Walke over, that cleared the high 18-foot fence that surround the cricket field. In the next over he dispatched two consecutive balls from Zamin Amin via the same route and altitude.

Now to the game! Galaxy took first strike. They got off to an excellent start, with their openers Akshay Homraj and Shafik Shah playing freely and scoring steadily. The hundred without loss came up in eight overs. The first wicket, that of Shah (32) fell with the score at 112, The second wicket fell at 133, but then Homraj and Zamal (37) got together in an 86-run partnership. This alliance was broken with Homraj being caught in the deep with the score on 219; his personal tally being 142 runs. One hundred of those runs came in boundaries and maximums: 10-4’s and 10-6’s. The Galaxy inning closed out at 229 for the loss of 3 wickets.

Facing a run rate of 11.5 per over to win, Everest ACS sent in Wasim Haslim and Jetendra Sookdeo to commence the run chase. Both these batsmen are accomplished run-getters. It was felt that once they were settled, the “runs would come”. This was not to be. In the first ball of the second over Haslim looped a simple catch back to the bowler Metray Balgobin. One wicket for nine runs. A pinch-hitter in Telston Johnson replaced him in the middle. Tello’s first hit was for a maximum, his second a double. The third sent him walking to the showers. Three for 33 in 3.1 overs. Everest ACS was clearly in front of the gun. In fact they may have experienced the pain of an “actual gunshot”.

Karan Ganesh and “Ol’ Reliable” Zamin Amin came together and took the score to 97 for 4. Once they were separated, another wicket fell at the same score. It was then 97 for 5 and only 8 overs having been bowled at that stage. The stylish lefthander Amarnauth Persaud, joined Amin. Persaud is known for his consistent run-scoring ability. He was a dynamic run-getter for Van Buren High School in the Public Schools Athletic League cricket program.

Together Amin and Persaud took the score to 157 before Persaud (33) was caught and bowled by Rafik Nazeer. Once again, another wicket fell in succession without any addition to the score. At 7 for 157 Everest ACS began to see whatever glimmer of hope they had, gradually disappearing. With the fall of Zamin’s wicket in the 17th over, the script was written on the wall: an Everest ACS defeat. Zamin had played an exciting inning. He scored 47 runs, 36 runs of which came by way of 6-6’s. The end came in the 18th over with the fall of the last wicket, Everest ACS falling short by 36 runs.

The final (both A and B Divisions) will be played on Sunday, October 1st at The Cage; the cricket field at Foch Boulevard and Long Street in Queens. The “B” Division final starts at 10:00 AM and the “A” Division Final is scheduled to start at 1:30 PM.

According to Rudy Persaud, President of the EACA, “This year’s finals will see cash awards distributed. For the “B” Division, the winning team receives $1,000 and the runner-up team $500. The “A’ Division’s winning team will receive $1,500 and the runner-up team $500.” The prize money is being contributed by Hafeez Ali, CEO of the Rockaway Group of Companies and benefactor of the Rockaway T20 New York Cricket Fiesta, along with the EACA President. James Manbahal of Manbahal Custom Homes, Builders, Demolition Experts and General Contractors donated all the divisional trophies for this year’s EACA 40-overs championship final as well as this Sunday’s T20 championship finals.

EACA President Rudy Persaud is encouraging all cricket fans to come out to the park and enjoy a fantastic day of cricket. For more information on this weekend’s championship finals contact Rudy Persaud at 917-682-6142.