All Round Lucas Mauls Westbury To Claim Their First MCL Title Lucas team before the game.

By Dervon Wallace | Scorecard
Lucas Sports Club became the eighth club to lift the Prestigious Metropolitan Cricket League premiere trophy this past Sunday September 13, 2015. They did so by ambushing the league’s most successful club- Westbury CC in the final of the 2015 Clement “Busta” Lawrence 40 overs competition held at the cricket friendly ground, Idle Wild Park in Rosedale Queens, NY.

It was a cool, slightly overcast morning after overnight rain evident on wetness of the grass, and a bit of moisture under the matting caused the start of play to be delayed. Westbury’s captain Clinton Lewis won the toss and elected to take first strike, much to the surprise of the onlookers and critics. Many had Westbury as slight favorite to win the contest even though they were humbled by Lucas in the preliminary round. One might have to agree after Westbury’s semifinal crushing of last year’s champions and pre title favorite Villagers two weeks ago. At the crease to take first strike  for Westbury, was Jamaica’s and West Indies’ former youth player Tristan Coleman who looked very confident coming off semifinal  and Inter League hundred the previous day, he was accompanied by the young and talented Javein Thomas. To start proceedings for Lucas bowling from the JFK airport end was the medium pacer Nalburn Whittaker. With 21 runs on the board Thomas was first to go after playing a crisp cover drive for four, two balls earlier. He presented a dolly of a catch to Jamaica First-Class player Zeniffe Fowler at short extra-cover, off the bowling of Whittaker in the third over of the day.

Jamaica’s first class player Jamie Merchant joined his Manchester team mate and the pair rode their luck surviving a couple drop catches adding 73 from 76 balls. The breakthrough came immediately after the water break, when Merchant 41 (54 balls 5×4 1×6) ill-advisedly try to take on Keron Thomas in his first over of the day. Luckily for Lucas, the man positioned in the region of deep mid-wicket was Fowler, who took a well-judged catch, settling himself, having to concentrate on not touching the rope.

Deron Ferguson 4 and Coleman 41 (58 balls 5×4 1×6) became Thomas’s second and third wickets respectively, falling in successive deliveries making it 115 for 4 in the 20th over. This brought arguably Westbury’s two best players to the middle in the form of USA senior team batsman Barrington Bartley and former West Indies Youths and Windward Island First-Class player Dennison Thomas, both with enough experience to know that a lot depended on them, if Westbury was going to post a big total. 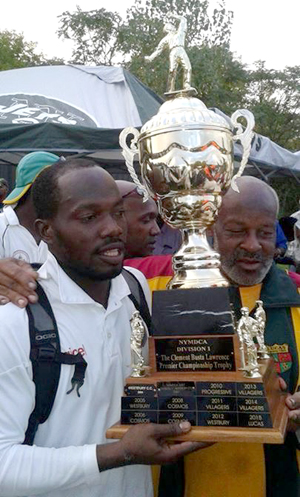 It wasn’t to be, as both fell in quick succession leaving Westbury at 141 for 6 which was soon 141 for 7 when the veteran Devon Campbell played what he thought was a sweetly timed pull shot over wide long-on which looked all set to go for a maximum, but Bereston Reid fresh from the arrival lounge at JFK terminal 4 had other ideas. The Jamaica Defense Force Soldier ran around some 10 yards, inches from the boundary rope and plucked the ball out of thin air in front of the Sang’s Accounting VIP booth.

Celebrating a moment of brilliance Reid went on a 200 meters dash at speed that would have given Usain Bolt a run for his money, so you can forgive his teammates, led by veteran Leeberth Williamson, who in their pursuit to catch up with him to join in the celebration, only were able to do so when the law man decided it was time to stop. Lewis 16 (32 balls 1×4) and Horace Porter 15 (17 balls 1×6) were the only other batsmen to reach double figures with extras top scoring with 46, as the inning folded at 195 in 36.5 overs. Thomas was the pick of the bowlers finishing with 5 for 36, along with Blake 4 for 37 and Whittaker 1 for 24.

In reply Lucas’s opening pair of Reid and Fowler started off positively with both batters looking very composed.  Westbury’s swing bowling sensation Linden St Louis who had been terrorizing batsmen all season long was made to look a shadow of himself as both batsmen negotiated his bowling. In the process latching on to anything slightly loose favoring the off-side. With 57 runs on the board in the 11th over, a bad judgment by Reid calling for a quick single, taking on one of the best fielders around, Bartley, who made a direct hit and Fowler 29 (37 balls 4×4) was adjudged short of his ground after the umpire initially appeared to have said not out. Reid was joined by Orval Crawford and the pair added 44 from 65 balls with the former doing the bulk of the scoring before Crawford 8 (29 balls) was caught by Ferguson off the bowling of Bartley. In came Jamaica’s senior national player John-Ross Campbell, with rain in the distance and Lucas slightly behind the required rate to secure a victory, should the rain intervene. He quickly settled any of Lucas’s nerves with a quick-fire unbeaten 41 (20 balls 6×4 1×6).  After a 55 minutes rain break and inspection, the umpires decided the ground wasn’t fit for play to continue. At that stage Lucas was 154 for 2 in 28.4 overs which meant they were ahead of the required par score by 12 runs.  Reid who like in the previous match against Westbury batted beautifully scoring another unbeaten half-century, this time not out on 70 (86 balls 8×4 2×6). Bartley was the lone wicket taker with 1 for 24 from his 8 overs. The wait is over for Quianna and her father Victor Reeves.

After the game Lucas captain Patrick Walfall and President Nalburn Whittaker praised the entire Lucas support staff and singled out Mrs. Quianna Reeves-Cuff who was very influential in securing this group of very talented players to represent the club she’s been a part of since she was a child. The players continued to sing praises for Williamson who left Villagers at the start of the season and vowed to bring success to Lucas, stating he thinks they lack a good bowler, and didn’t he delivered.

Final score Westbury 195 all out and Lucas 154 for 2 in 28.4 overs after rain ended play. Lucas winning by 12 runs under the league better run rate ruling, Keron Thomas was named man of the match for his 5 for 36 from 8 overs.