By Dervon Wallace
Defending Champions Villagers Cricket Club continued their good start to the season making it two wins from two with a comprehensive demolishing of  a much“hyped up” Lucas CC defeating them by 97 runs as action continued in the Metropolitan Cricket League 2015 Clement “Busta” Lawrence Premier League at the Gateway Cricket Field in Brooklyn NY on Sunday May 17, 2015. 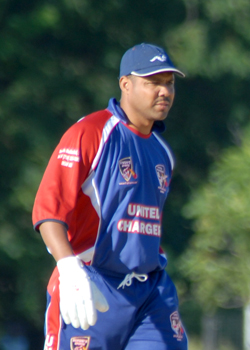 Leading up to the contest many forgot it was only the second game of a long season. Some supporters taking to social media saying the champions would be put to rest, one Lucas supporter suggesting the Villagers management forfeit the game and don’t waste time showing up.

In slightly overcast condition after being asked to take first strike, Villagers experience opening pair of Melroy Kingston and Richard Staple went about their task in a professional manner. The duo added an entertaining 78 from 74 balls in 55 minutes before Staple 48 (37 balls, 4×4, 4×6) tried to work a nothing ball but only succeed in deflecting the ball onto his leg stump to give K Thomas the first of his two scalp. It was soon 83 for 2 when Kingston 27 (42 balls 3×4 1×6) still fresh from his open day century was found short of his ground attempting a second run.  Sashane Anderson and Jermaine Lawson added 30 for the third wicket before Anderson went for 13.

Lawson who made 17 along with all the other batters got good start but fail to carry on. George Adams made 29 (29 balls 2×4 2×6) while Rashard Marshall batting at the unfamiliar number 8 position blasted a quick fire 24 (9 balls 1×4 3×6) as Villagers was dismiss for 231 off the last ball of the allotted 35 overs.

Blowing for Lucas; Evol Loten finished with 4 for 33 from 4 overs, K Thomas 2 for 38 from his 7 overs and there was a wicket apiece for Ashane Morgan and Captain Patrick Walfall.

Up against a fearsome Villager bowling attack lead by Lawson and Adams, Lucas hopes would rely heavily on their two most fancied batsmen in Jamaica twenty20 player Aldaine Thomas and first-class player John Ross Campbell both still fresh from the airplane along with JDF senior cup opening batsman Bereston Reid.

Reid and Aldaine Thomas open the batting, with the score on 17 in the fourth over the latter went for an ambitious drive but only succeed in presenting a skier to mid-off where Cliff Roye waited an eternity before completing a well-judged catch from the bowling of Adams. Campbell 9 was next to go caught by Adams off the bowling of a fired up Lawson.  From here on wickets fell regularly and Lucas was never in the hunt as the top scorer was number eleven Nalburn Whittaker 27 with 1×4 and 2×6 off the bowling of Lawson before he could be seen literally running from the pace of Lawson.

The Lucas inning folded at 134 from 25.4 overs. Lawson, Adams and Andre Hooper all picked up 2 wickets and there was a wicket apiece for Talisman Gordon and Ewart Gayle.