A week after Trinson Carmichael set a new Liberty Sports Club record for the most economical 40-Over bowling spell, fellow left armer Andre Kirton bettered it. Carmichael bowled 8 overs 2 maidens for a miserly 8 runs while picking two wickets on Sunday, May 15th against Falcons Cricket Club. On Sunday May, 22nd Kirton sent down 7.2 overs, 5 maidens for a mind boggling 6 runs and scalping four Galaxy Cricket Club batsmen to set up a massive 7 wicket win for #TheBlueNation. 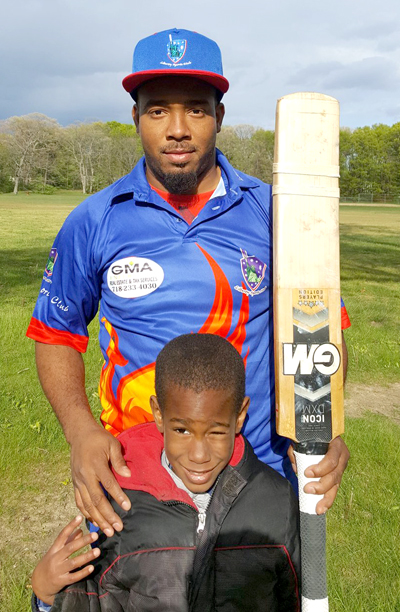 Andre ‘Rusty’ Kirton set a new Liberty Sports Club record for most the economical bowling spell with figures of 7.2-5-6-4.

The Chan’s P & H Mechanical Inc. sponsored LSC won a crucial toss at Bay Park to start off the proceedings. Wet weather conditions which have impacted games during the first two weeks continued on week three. This made the toss decision a simple but crucial one when LSC captain Danesh Deonarain learnt his opposite number, Dhaniram Seepersaud, called incorrectly.

Galaxy CC was asked to bat and Kirton started on his record setting day. His first over was a maiden and his second a wicket maiden. He followed those up with 3 more overs, two of which were maidens to cap off a first spell of 5 overs, 4 maidens, 4 runs and 1 wicket.

Jamiel Jackman, the 19 year old right arm quick, kept the pressure fully locked on at the other end. Sending down his 8 overs allotment in one spell, the young seamer bowled with pace, heart and smarts to turn in figures of 1 wicket for 27 runs including one maiden over. His one wicket was that of Rafeek Nazeer (19) who tried to stick it out but eventually succumbed in the battle. Jackman along with Kirton’s spell and Hemendra Ramdial’s 4 overs, 1 maiden for just 7 runs kept GCC to 48 for 2 at the first drinks break.

Troy Mars attempted a counter attack hitting two fours and two sixes in his inning high 32 but his stay was short lived. Carmichael who had picked up the attack after Jackman’s spell ended, bowled Mars and that opened the floodgates. Krishna Harricharan (20) stuck around but eventually was smartly run out by Ramdihal. No other GCC batsmen made it past double figures. Carmichael finished his spell picking up 1 more wicket and Terrence Madramootoo sent down 7 overs, picking up two wickets for 18 runs.

Kirton returned to wrap up the GCC inning for 99 all out, picking up 3 wickets for 2 run in his final 2.2 overs, 1 being a maiden. Kirton’s complete spell of 4 wickets for 6 runs in 7.2 overs with 5 maidens now sits on top of Liberty Sports Club most economical bowling stats in a 40 over inning. He joins Carmichael, Leon Mohabir, Madramootoo and Tooneshwar Kristona as the top 5 bowlers on that list.

With the wicket still damp giving way to some uneven bounce the LSC batsmen never looked too flustered in chasing down the total. Francis Mendonca, who top scored with 25, Anthonio Chan (6) and Trevor Henry (19) were the batsmen to get out in the chase. Kirton’s unbeaten 17 and Carmichael 19 not out, which included a four and a massive six over square leg, ushered home the Rockaway Group of Company sponsored LSC.