By Sudharsan Ramarao
Modern day cricket can sometimes be called the batsmen’s game. Small grounds, big bats and a number of regulations that favor big hitting, have all contributed to this opinion. As much as it is true, the counter opinion is also true. 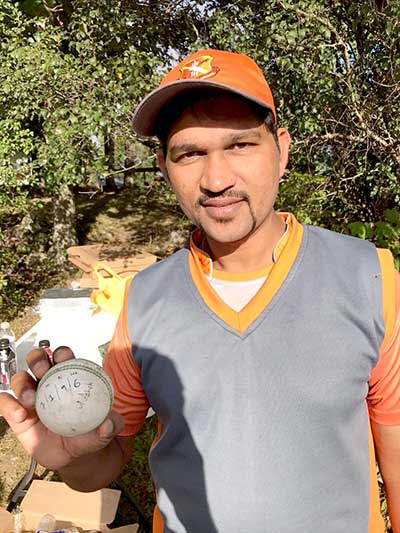 Ashok Adikoppula had figures of 6 for 9.

As with the proverb “Necessity is the mother of invention,” skillful bowlers have always found a way out irrespective of the ground, batsmen and situations. Ashok Adikoppula is one of those skillful bowlers in the capital district. Known for his stinging in-swingers, Ashok has a keen eye for the game that helps him read a batsman like very few can. If you give him the charge, he can bowl a dipping slower one. If you give him the room, he will bowl that stinging in-swinger. If he sees you fishing outside the stumps, he can draw you out with a leg cutter. And when everything goes well for him, he can rip apart a batting order in no time like he did on September 9th against the RPI.

Chasing a challenging 161 from 35 overs, the RPI batsmen were in for a shock as they faced a rampaging Ashok. Faced with the pressure of a must-win game coupled with the loss of a couple of their regular batsmen, the RPI batsmen were found wanting against a quality bowling spell from Ashok. Saadman Chowdhury didn’t read a slow ball on a good length area and was out for a splendid catch at midwicket by Sridhar Mahendrakar, the Highlander skipper. Prasanna Date didn’t cover for the in-swing enough and was out caught behind. Prateek Hundekar, a technically sound batsman, failed to clear Hiren Khakadiya at the 30 yards’ circle. Sayan Chaudhari got beautifully set up with five straight in-swinging deliveries. But he failed to read the follow-up leg cutter and was out caught behind. Ankur Singh had no clue for a full-length in-swinging delivery that rattled his stumps. But the best of them all was the wicket of Nithyagopal Goswami who was lured to go over the top with a Test match field. But Nithyagopal found no timing trying to hit a slow ball and gave a tame catch to Naveen Thiagarajan at short cover. Mithesh Jain Godha, the fast leg-break bowler then cleaned up the tail picking up three wickets. RPI folded for 30 runs in 18 overs losing the game by a record 131 runs.

Being put in to bat, the Highlanders lost their opener Naveenan Thiagarajan early to a stumping. Hariprasad Amanapu then joined the other opener Shoaib Hassan, who continued his rollicking form of the season by going for his shots early. But just when he was beginning to look dangerous, he got bowled by Prasanna Date. His short cameo of 16 included a huge six and a four. Batting with renewed vigor on the other end was Hariprasad Amanapu who was timing the ball sweetly right from ball one. Very strong against the spinners, Hariprasad came back to his usual self, dispatching them with disdain. Determined to overcome his soft dismissals to the slow bowlers in the past, Hariprasad lofted the spinners for huge sixes at will. In all he scored six huge sixes and two boundaries. His action packed and entertaining inning ended shortly after he reached 50. Varun Penmatsa playing in the middle, played the holding role as he scored a steady 17 while Vishal Sridhar and Mithesh Jain gave the final overs flourish as they finished with 18 and 15 runs respectively.

For his magical spell that fetched him 6 wickets for 9 runs, Ashok was adjudged the Man-of-the-Match.