By Sam Sooppersaud
Fans who turned out at the Foch Avenue Cricket Field (The Cage) in Queens, New York, on Sunday, September 11, 2016, came out hoping to see a slugfest. After all, the two finalist in the 2016 40/40 Eastern American Cricket Association Tournament, Atlantis Cricket Club – NY and Everest/ACS are two of the most dominating club teams, not only in the EACA, but in the New York metropolitan area. They are reputed for tearing apart their opponents, on occasion. So on this day, the fans were expecting a “wham” of a match. Instead, they went home hanging their heads in disappointment. The game was a one-sided affair.

Prior to the start of the game, the players and official observes a minute of silence in memory of the thousands lost in the 9/11 disaster 15 years ago. Especially remembered was our colleague and friend, Nizam Hafeez, Shivone Mentis and other acquaintance. 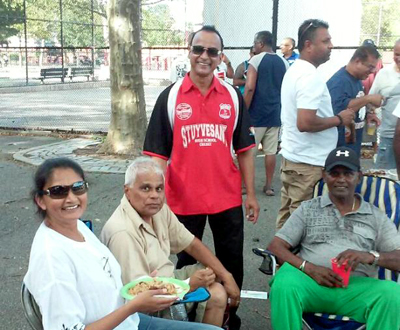 Fans at the game, Dolly Prashad, Krish Prashad, Zaffie Mohamed and Sew Shivnarine. Pictured above is the victorious Atlantis team and supporters with championship trophy.

Even the players, on both sides, were shocked at the ease with which the loser succumbed. One club literally annihilated the other, to put it lightly. Spectators were in disbelief as to how the batting machine of a club disintegrated; self-destructed may be a more applicable word for the debacle.

Enough; let’s get into the details. Atlantis’ skipper Alex Amsterdam won the toss and deferred first strike to Everest/ACS.  Greg Robinson took the new ball from the Foch Avenue end. His fourth ball rattled the stumps of Prashad Mahadeo. It was 1 for 1. The second-wicket pair of Shiv Seemangal (20) and Wasim Haslim (13) put on 47 runs during the next five overs. Then the procession started. Batsmen walking to the wicket, then almost immediately walking back to the sidelines.  Within eight balls Everest/ACS lost four wickets for the addition of only one run. A sixth-wicket partnerhip of 26 between Deveshwari Prashad (15) and Zamin Amin temporarily gave some hope to Everest/ACS. Once they were separated the end was in sight. Chand Rampersaud (11) and Terry Hastoo (9) added some much needed runs, but not enough. The inning folded at 113 in 27 overs.

Pacer Greg Robinson, the leading wicket-taker in the EACA 40/40 tournament returned figures of 4 for 46 off 8 overs of hostile bowling. He was supported by the other speedster, Garfield DeRoche, 6-3-15-2, and slow left-armer Prashant Nair 4-0-8-2. Dillon Bourne and Alex Amsterdam each grabbed one wicket each for 16 and 14 runs, respectively.

Atlantis sent out the in form Randall Wilson and Wahid Ward in search of 114 runs for victory. Wilson was bowled on the second ball of the inning, sent down by Deveshwari Prashad.  Atlantis: One wicket down, no runs on the board. This was the sole respite Everest/ACS enjoyed. The second-wicket pair of Alex Amsterdam and Wahid Ward launched an attack on the bowlers. They put on 106 runs, before Ward (46) was caught attempting a third maximum in the over. Amsterdam reached his half-century with a classic cover drive to the boundary. At the end he was 53 not out. Final score, Atlantis 114 for 2 and victory, in 16.4 overs.

Everest/ACS employed six bowlers in their attempt to dislodge the Atlantis batsmen. Deveshwari Prashad (1 for 14) and Mahendra Parsram (1 for 9) took the two wickets that fell. Trevor Walke 0 for 34, Karan Ganesh 0 for 18, Zamin Amin 0 for 19, and Wasim Haslim 0 for 16, were the other bowlers used.

After the game the winners proudly posed for a photo session with their four-foot high trophy.  A few comments on the game; Everest/ACS Captain Karan Ganesh, “Our guys batted poorly. Atlantis was better prepared.” Skipper Alex Amsterdam of Atlantis, “This year is the 50th Anniversary for our club, we wanted to do something special, and we did it.” Atlantis’ long time member and mentor, Carlyle Miller stated, “Leading up to the playoffs our guys were not together. We were not playing as a cohesive unit. We worked on that, and today, we are the champions.”