Atlantis Nudge Villagers Down A Notch 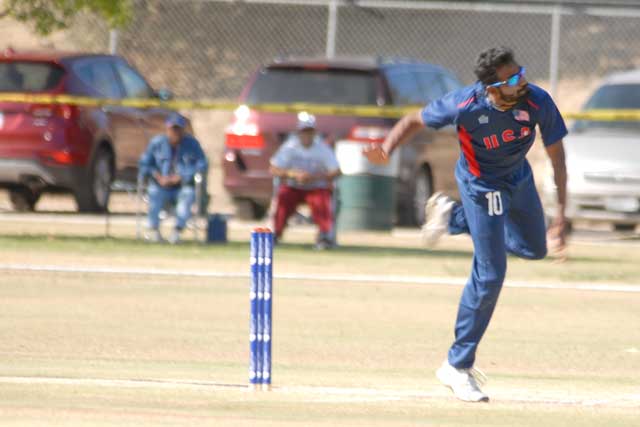 Prashanth Nair continued his good form bagging 5 for 33 and then hit a winning 33 not out. Photo by Shiek Mohamed

Atlantis Cricket Club – NY last Sunday nudged Villagers Social & Athletic Club one point down in the 2017 Clement “Busta” Lawrence Premier League season, with a nail-biting, nut-cracking 4-wicket win. It was a hard-earned but deserving victory for the now 6-1 Atlantis.

Played under brilliant sunshine at Floyd Bennett Cricket Ground in Brooklyn, NY, Atlantis won the toss and offered Villagers first knock. The match-up was billed as one of the most anticipated matches of the season, and that it was. Both clubs entered the match with 5-1 records and sitting up in the points standing alongside Westbury Cricket Club and Suburbia Sports Club, in the top-four rankings. Atlantis, making a return to the Metropolitan League after a 28-year hiatus, now sits in third place and leads Villagers by one point.

The talent pool in both clubs was rich enough to create tremendous buzz in the cricketing community, generating lots of excitement and interest in the outcome of the match. Villagers with a roster of stars including former USA national players Steve Massiah, Rashard Marshall, George Adams, and Barrington Bartley, former Jamaica national captain Tamar Lambert, and Jamaica and West Indies’ Xavier Marshall, were matched up against Atlantis’ USA nationals Alex Amsterdam, Kevin Darlington and Prashanth Nair, along with Randall Wilson, Francis Mendonca and Keon Lake, a trio called to trials for the USA men’s senior team, earlier this year.

The stage was set and immediately Villagers was in a spot of trouble, performing under expectations and losing Bjorn Brown, 4, Tamar Lambert, 3, and Xavier Marshall, 36, (2x6s, 2x4s) for under 50 runs. It was Barrington Bartley, 29, (3x4s) and Sashane Anderson, 50, (2x6s, 2x4s) off 53 balls propping up the Villagers XI. In between they lost Steve Massiah, driving and edging to wicketkeeper Francis Mendonca for 2 off four deliveries.

With the Villagers’ top order gone, it was left up to the hard-hitting Rashard Marshall and his skipper George Adams, an equally hard-hitting batsman to salvage the inning. However, Rashard Marshall contributed 18 before departing just seven runs ahead of his skipper. In the process it was Atlantis’ spinner Prashanth Nair, like the well-known follicle remover, uprooting Villagers with a 5 for 31 spell. Nair also featured in three catches, including the dismissal of Jamaica’s Tamar Lambert, caught off the bowling of Dillon Bourne. Xavier Marshall was earlier cleaned bowled by Kevin Darlington for a defiant 36, as Villagers struggled to get a challenging partnership going. Rashard Marshall added 16, while Mikie Alexis was not out on 15, with Villagers reaching 167 all out in 35.2 overs. There were 8 extras, all wides, in an otherwise tidy bowling performance by Atlantis. 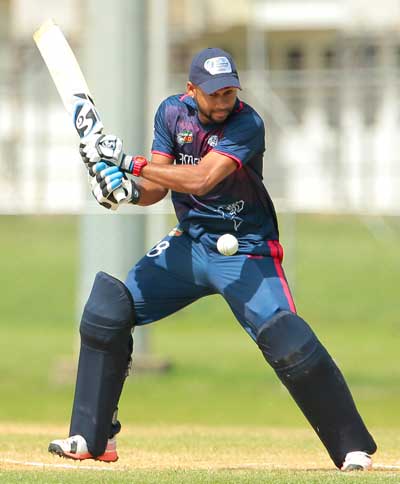 Alex Amsterdam hit a defiant 83 not out in Atlantis’ win over Villagers. Photo courtesy of Ash Allen Photography

ATLANTIS’ RESPONSE
Tasked with what some might consider a reachable target of 4.2 runs per over, Atlantis started about its business with some measure of confidence against a team that not only had a deep batting line-up, but also wealthy in the bowling department.

Atlantis lost Francis Mendonca at the 20 run mark, LBW to George Adams who would go on to snare the next three Atlantis scalps with figures of 8-1-27-4. It was a fine effort by the Villagers skipper. A spell that threatened the Atlantis line-up, as the team struggled to stay abreast of the modest run rate, and losing six wickets for 87 runs, before Alex Amsterdam, 83 not out (1×6, 6x4s) off 89 balls and Prashanth Nair, 33 not out (1×6, 3x4s) off 39 deliveries, teamed up in similar fashion to the previous week and produced a match-winning partnership of 82 runs off 16 overs in the Atlantis tally of 170 runs. There were 15 extras, including five no-balls.

Opener Henderson Blades with a contribution of 14, and match skipper Treon Forde, 10, were the only other two Atlantis batsmen to reach double figures, as the Villagers’ bowling attack sought to defend the 167 total while stifling the Atlantis batsmen. However, the Amsterdam/Nair duo ensured Atlantis the victory at the 38.2 overs mark.

With the win Atlantis moves into third-place with 36 points, one point ahead of Villagers, with Westbury Cricket Club at the top with 40 points and Suburbia Sports Club in the number two spot with 37 points. With just five points separating the top four teams and seven matches completed, the 2017 Clement “Busta” Lawrence Premier League season is getting as hot as the weather is expected.