By John L. Aaron
Atlantis Cricket Club – NY’s Mothers Love Cricket Philly ’18 Tour was a “Wish and a Wash” weekend. Enjoying an early season bye from the Metropolitan Cricket League’s 2018 fixtures, Atlantis took the opportunity to have a jaunt down the New Jersey and Pennsylvania Turnpikes to Merion Cricket Club and British Officers Cricket Club (BOCC), for two one-day fixtures.

The plan was to have a pair of brotherly love matches against Merion Cricket Club established as a private club in 1865 on the Saturday, and BOCC established in 1925 as an affiliate of the British Officers Club of Philadelphia, on Sunday (Mother’s Day), however, Mother Nature was not very cooperative, more so on Mother’s Day.

The Saturday fixture against Merion Cricket Club in Haverford, PA was reduced to a T20 affair, with both teams playing short-handed because of the forecast of a Nor’easter-like thunderstorm headed through Philly, coupled with some of the players having to work part of the weekend. However, that did not detract from the backdrop of one of the finest outfields of a cricket ground/club anywhere in the world. It was a wishful fantasy for many of the Atlantis players who were able to experience what it’s like to play at a first-class facility sans turf wicket. 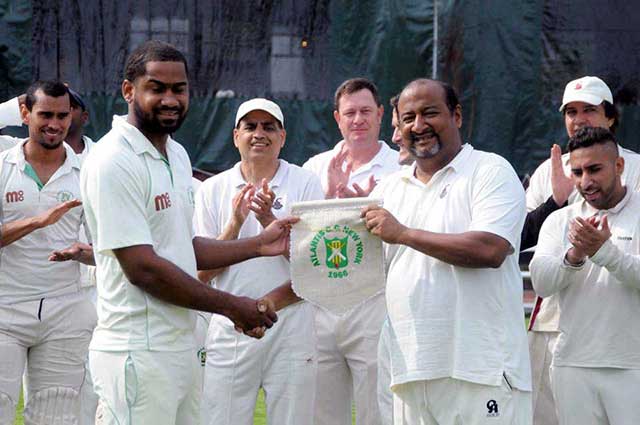 The Merion Cricket Club with its ornate double decker façade, lush billiard-top like outfield, cozy clubhouse, deep seated armchairs, exquisite waiter service, pro shop, squash and bowling amenities and lawn tennis courts, was as close to Lords as some of the players may ever have the opportunity to have a romp. With a dressing room that sported all the luxurious amenities unaccustomed as it were to a set of players who no doubt, would aspire to participate and wish for as members, it was a wish come through.

The lunch and refreshments provided by Atlantis’ gracious host was as enjoyable as the plush sideline cushioned seats made available for the touring party’s accompany members of the opposite gender. Although the weather was overcast, the sun did peek out at times, before the skies opened up around 7:00pm long after the predicted 5:00pm downpour promised by the forecasters. It was enough of a window to get in the T20 encounter, with neither side paying too much attention to the scores, as Atlantis emerged atop of its hosts, some of whom may have had a second helping with the bat. Such was the camaraderie and flavor of the two teams.

Making cameo appearances for Atlantis were Club Manager Lester Hooper and club member Julian Aaron – both a sight for sore eyes on the field of play. Both men in smart looking whites were late additions to the Atlantis squad, but can now safely boast to having played at the famous Merion Cricket Club, known more these days for its lawn tennis membership and the annual Philadelphia International Cricket Festival, than for competitive league cricket. It would break the average cricketer’s heart to see such a magnificent outfield serving as the turf for numerous lawn tennis netted rectangles. 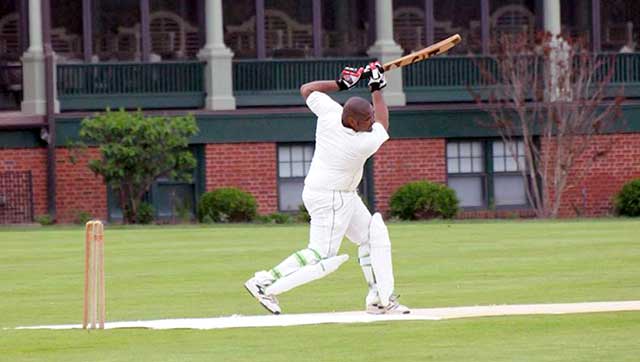 The meticulously curated and maintained outfield is the first thing that attracts visitors to the club nestled just 315 yards behind the SEPTA railroad Haverford Station. With an electronic scoreboard, valet car service and batting cages, the Merion Cricket Club ground would be the envy of any cricket club in the USA. It was the “Wish” part of the tour that the Atlantis players and touring party would remember best, as the Mother’s Day Sunday was the “Wash” part that denied the tourists the opportunity of playing BOCC at Evansburg Park ground.

As the skies opened up on Saturday night and into early Sunday morning, it became apparent that the day would be a wash and Mother Nature had ruled no play on Mother’s Day, much to the consternation of those mothers in the touring party who looked forward to broad-brimmed hat weather in the clean Philly sunshine. It was not to be, and so Atlantis called it a wash and headed for an old-fashioned Philly Diner for a late breakfast and the foggy weather trip back down the Turnpikes, with a solemn wish in the hearts of all, that Merion and BOCC would accommodate Atlantis again next year.