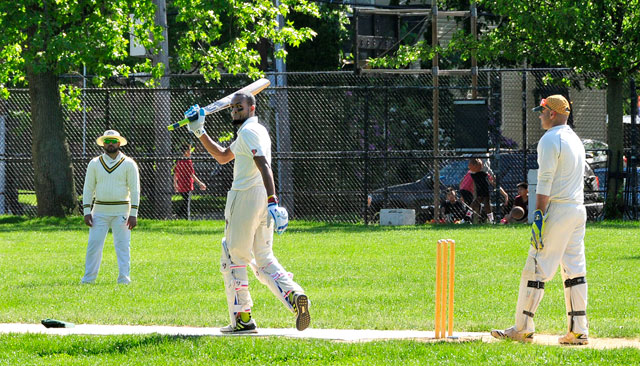 Staten Island Cricket Club fell victim to Atlantis Cricket Club – NY last Sunday, despite a fifth-wicket aerial assault of sixes from the bat of M. Waseem. The power-hitter clobbered six of his team’s nine maximums, compared to a team total of five off the Atlantis bats.

It was a cool afternoon at Walker Park on Staten Island, with an early spring nip in the air from the wind creeping across the body of water from neighboring New Jersey State. It was the third match of the Metropolitan League’s 2017 season, and was scheduled for 40 overs with a 12:30 pm start at the home of the Staten Island Cricket Club – Established in 1872. 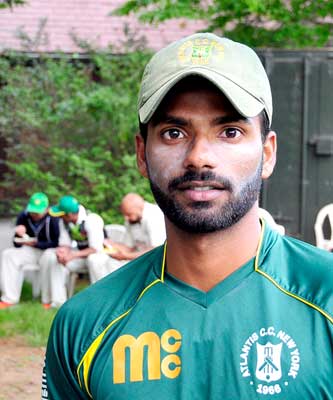 On Sunday a baseball game was in progress per an official Park permit, so the cricket match started at 2:30 pm instead, and was reduced to 29 overs. The baseball game finished just four minutes ahead of its 2:00 pm scheduled end time allowed by the permit.

Winning the toss and electing to strike first, Atlantis led by Treon Forde in the absence of Atlantis’ regular skipper Alex Amsterdam and Nicholas Standford both doing national duty in Uganda at the ICC’s Division 3 championship tournament, started with Henderson Blades and Francis Mendonca. The opening duo were separated at the 12-run mark with Blades departing caught off the bowling of M. Waseem for 10 with a pair of boundaries. However, the youthful Randall Wilson joined Mendonca and the pair took the total to 83, before Mendonca was trapped LBW in the fifteenth over by W. Ilyas for a composed 36 including 3x4s. The 71-run partnership was the result of some excellent running between the wickets by the two athletic cricketers. It was also instrumental in Atlantis building a reasonable total to defend. Wilson accelerated his scoring ahead of Mendonca reaching his half-century off 47 deliveries, including 1×6 and 2x4s, before being run out after adding three more ticks to his and the team’s tally.

All-rounder Keon Lake and Ron Andrew took the Atlantis total to 143 before the latter failed to get his bat between the ball and his pad, and exited LBW, having made a quick-fire 26 with 2x4s and one maximum. Dwayne Smith joined the very aggressive Keon Lake who was on fire navigating the fielders for the singles and doubles, while peppering the boundary for 5x4s and 2x6s in his exhilarating and unbeaten knock of 52. It was a thrill to witness Lake with such a controlled at-bat by the very passionate cricketer. With a very disappointed Dwayne Smith departing LBW after scoring just five runs in the twenty-fifth over, Atlantis on 186, was still hopeful of posting two notes with four overs remaining and Lake still at the wicket.

Left-arm orthodox spinner Prashanth Nair joined the excitement and provided some of his own, hitting eleven off three deliveries, including one maximum and one boundary. Atlantis eventually ran out of overs with the score at 203 and seven wickets down. It was a decent total for 29 overs, but would it stand up against the Staten Island Cricket Club? A club Atlantis was meeting for the very first time. 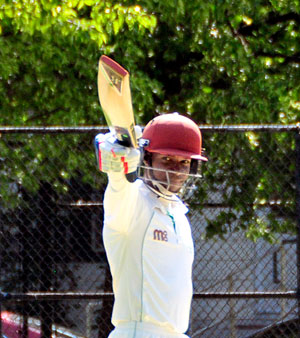 Randall Wilson registered his second half-century of the season.

Staten Island Fights Back
Staten Island restricting Atlantis to just over two notes, was only the beginning of their battle, as the question whether Atlantis had the fire power with the ball to defend its 203 loomed large. As Staten Island’s Ibrahim Zahoor and Majid Arab strolled to the middle, Atlantis armed Greg Robinson and Dillon Bourne with surface to air missiles. Robinson was the first to strike trapping Zahoor LBW with the second ball of his opening spell. Staten Island was indeed in trouble. Ali Malik replaced the hapless Zahoor and together with opener Arab stabilized things a bit, putting on a 57-run partnership primarily at the expense of Dillon Bourne who was sent to the ropes to retrieve three of his first six legal deliveries. However, the pacer was able to pull it back somewhat finishing with figures of 6-0-34-0. Robinson at the other end despite experiencing some difficulty finding his strike zone, ended up with figures of 5-0-34.0.

Things got a bit worse before they got better and then worse again for Staten Island, because with the introduction of Prashanth Nair in the eleventh over, the enthusiastic off-spinner struck with the third legal delivery of his very first over. He had A. Malik, 16 (1×4), caught by skipper Treon Forde at deep mid-wicket. However, Nair was not spared the later aerial assault by the Staten Island batsmen, and was hammered for three maximums in his fourth over by the stocky M. Waseem, having bowled his first three overs for a paltry five runs. Nair would redeem himself and ended up with figures of 6-1-26-6, grabbing three wickets in his final over for only one run being scored in the over.

Back to the batting. Staten Island having lost their first five wickets for 89 runs in the seventeenth over, made a gallant effort to stay on top of the target, adding 49 during a fifth wicket stand. Along the way they lost Majid Arab for 35 off 47 balls (1×6, 5x4s), Marlon Persaud for 4, and Asghar Qureshi for 1. It was Waseem that brought Staten Island some hope chalking up a rapid-fire 43, including 6x6s and 1×4 off 21 deliveries, while paired with Fahad Mughal, 26 off 15 balls (2x6s, 2x4s). However, it was all downhill from there on, as veteran Kevin Darlington making his Atlantis debut and having been introduced earlier in the attack snared the wicket of M. Arab, 35 off 48 balls (2×6, 5x4s). Darlington with experience and guile in his favor, bothered the remaining batsmen, except for his third over where he conceded 10 runs ending up with figures of 4-0-18-1. He was helped in the wrapping up of the Staten Island tail by Keon Lake 2-0-28-1, having been rocked for 23, including three maximums and a boundary in his second and final over. The south eastern corner of the ground appeared to be the missile target zone for the Staten Island batsmen, and they frequented the location with ease. However, it would have taken a strategic ballistic air missile to take the victory away from Atlantis. The visiting skipper Treon Forde managed 2-0-15-1, as Atlantis sunk Staten Island for 146 all out in 25 overs. 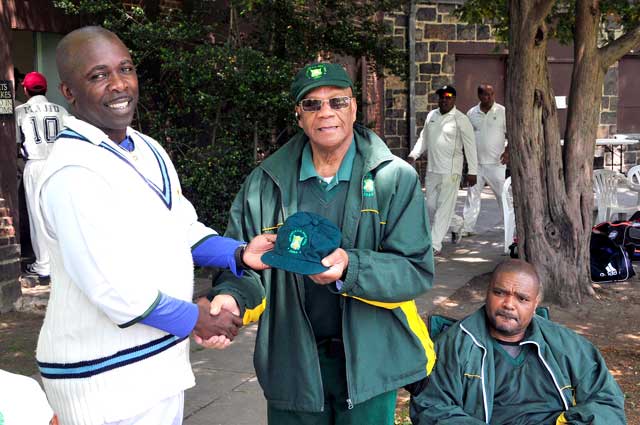 It was Atlantis’ third straight win in as many weeks, with a Memorial Day weekend break coming up and the club hosting Lions Cricket Club on Sunday, June 4 at Floyd Bennett Field, Brooklyn, NY. Match time is 12:30 pm.

FOOTNOTE: Kevin Darlington’s addition to the Atlantis squad adds depth, dimension, and experience to a relatively young but talented squad. The veteran Darlington has represented Guyana and the USA on the international circuit. He last represented the Stars and Stripes in 2010 vs. Afghanistan at Dubai. The talented medium pacer has 79 first-class wickets from 30 matches, with best bowling figures of 6 for 25 and an economy of 3.02. He also has 22 List A and two T20 matches to his credit in a career spanning 1994 to 2010, in addition to several stints in the Metropolitan and Eastern American Cricket leagues.

Darlo, as he’s familiarly known will no doubt also assume the role of player-coach on the Atlantis squad, because of his experience and continued involvement in the coaching of both men and women cricketers in the USA. He is highly respected on and off the field in the cricketing community, by players and fans alike, and regarded as one of the best fast medium pacers ever to play in the USA.