Atlantis Stars Do Battle In Another Galaxy

Coming off a decisive victory against East Side Warriors the previous weekend at Brentwood, Atlantis Cricket Club – NY got out their light sabers to do battle in Brooklyn against Galaxy Cricket Club, this past weekend. 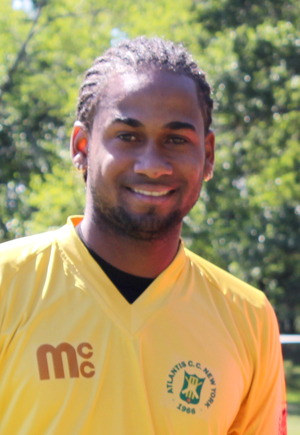 Atlantis skipper Alex Amsterdam hit a match winning 82 not out against Galaxy. Photo by Shiek Mohamed

Winning the toss and electing to take the first orbit into space, Galaxy was quickly spinning out of sync, losing the wickets of Krishna Harricharan, 0, and Metray Balgobin, 2, to Jermaine Horatio (6-1-32-2) and Greg Robinson (4-0-17-1) respectively. Veteran Cosmonaut Tamesh Balwant and Rajendra Latcha sought to right the Galaxy spaceship with contributions of 18, and 32 respectively, and establishing a flight plan for Dhaniram Seepersaud, 12 and Rafeek Nazeer, 23, following behind, however, the remaining five astronauts on the flight deck were only able to contribute a total of 39 runs, with the exception of Yudesh Bissnauth with a gallant 15 (2x4s). The data recorder showed Galaxy had completed 155 runs around the planet, as the flight grounded to a halt at the 40 overs mark, with eight cosmonauts running out of oxygen along the way.

Atlantis took flight in a positive direction, before vice skipper Ryan Sukhdeo returned to earth, having contributed 5. His opening partner Henderson Blades ran out of oxygen on 21, including three boundaries. However Captain Alex Amsterdam took control of the flight deck and swishing his light saber in a decisive manner, reached 82 not out (8×4 s), on a blistering hot day and path to the victory over Galaxy.

Captain Amsterdam was ably assisted by his Flight Engineer Jamal Hinckson, 32, not out, having lost Lieutenant Kavishwar Bridgepaul, 4, somewhere along the orbit. Thus Atlantis completed the run into the Galaxy at 158 for the loss of three astronauts in 26 overs, while recording another decisive victory; this time by seven wickets. Extras contributed 13 to the total. It ‘s worthy to note that the fielding of some of the Galaxy players was outstanding, particularly in the sweeping positions on the boundaries.

Atlantis comes up next against Liberty Sports Club next Sunday at Heckscher State Park. Game time is 1:00pm.