By Sam Sooppersaud | Photo Gallery | Videos
A relatively small, but enthusiastic crowd was on hand at Baisley Pond Park Cricket Field, in Queens, New York last Saturday, to witness an under-performing Bangladesh XI send a shock-wave through the mighty Pakistan, in the clash of their second round preliminary game of the Rockaway T20 NY Cricket Fiesta. 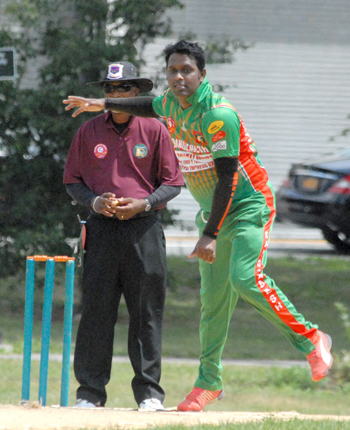 MD Kamruzzaman picked up 4 for 21. Photos by Shiek Mohamed

It was Saturday, July 2nd, America’s Independence Day weekend.  On July 4th, America celebrated its 240th Anniversary of its Independence from the British. During the past few weeks of the tournament, large crowds have come out to watch the matches, and the fans were not disappointed. They were entertained.  On this day though, fewer fans were in attendances, although the cricket was full of action.

Bangladesh (5 points) took on Pakistan (10 points). The Pakistani batsmen were on a “runs fiesta” in the past two games. Pakistan scored in the 200’s in both games: 252 vs Guyana and 229 vs Trinidad & Tobago. On the other hand, Bangladesh’s highest score was 154 – vs T&T. The pendulum of success at the start of the game was tilting heavily in favor of Pakistan, but were they in for a shock!

Pakistan took first knock and immediately they put Bangladesh under fire. First ball from Arif Islam to opener Umar Farooq, 6, second ball 4, third ball 6, fourth ball 2, fifth ball 6. The batsman succumbed on the sixth ball caught on the deep square-leg boundary. Coupled with three wides, at the end of the first over Pakistan was 27 for 1. If this onslaught was any indication of things to come, then Bangladesh was looking down the barrel of a cannon.

Commentator Carl Bennett predicted a “firestorm” building around the shocked Bangladeshi boys. However, by the end of the contest the threatened conflagration (from Pakistan) was reduced to a mere flicker. They subdued meekly to their opponents.

Pakistan lost another wicket on 34 in the third over. Some lusty hitting from Shazad Shahid took them to 59 at the end of the Power-play. Bangladesh then took the upper hand reducing the scoring rate to a run a ball for the next three overs.  At 78 for 4, Uzman Chaudhry (23) and Asad Munawar (33) came together in a fifth-wicket partnership of 53 runs. Once they were separated the rest of the Pakistan batsmen fell like bowling pins. Their contributions: 4, 3, 0, 1 and 0. The last five wickets fell for a miserly 11 runs.  Pakistan 142 for 10 in 19.4 overs. 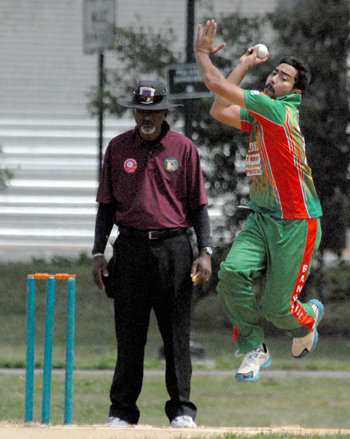 Syed Hussain took the first hat-trick of the tournament, taking 3 for 24.

Bangladesh commenced their run chase in high gear. Openers Nazmul Siddique and Mohammed Nazu created the Bangladesh model of a firestorm. First six legal balls: 4, 4, 1, 4, 2, 4. Tack on four wides, and the score at the end of the first over was 23 runs.

With the score on 77 and in the 7th over, a misunderstanding accounted for the run out of Nazu, 31 runs from 32 balls faced.  Bangladesh 77 for 1. Pakistan then sent back three batsmen for the addition of 17 runs.  94 for 4 in the 11th over. The game was somewhat poised, with the batting side having a slight edge, but with a rejuvenated Pakistan team, judging from their renewed and vigorous body language.

However, the fifth wicket partnership of Zakir Hussain, 33 Not Out and Arif Islam, 16 Not Out sealed Pakistan’s fate. Final score: Bangladesh 145 for 4 in reply to Pakistan’s 142 for 9. Bowling for Pakistan, Naeem Arif, 2 for 20 with two batsmen falling via the run out route.

The points-standing at the end of the 4th round of the tournament is as follows: Guyana 15, Pakistan 10, T&T 5, and Bangladesh 10.

The action in the Rockaway T20 NY Cricket Fiesta continues on Saturday, July 16th, at the Baisley Pond Park Cricket Field, located at the corner of Baisley and Rockaway Boulevards, Queens, New York. Two preliminary round games are slated for each team. With the Twenty20 format of cricket, anything is possible.

The battle for playoff berths is still wide open, so cricket fans come on out and enjoy some exciting T20 cricket! The competition is destined to be fierce! 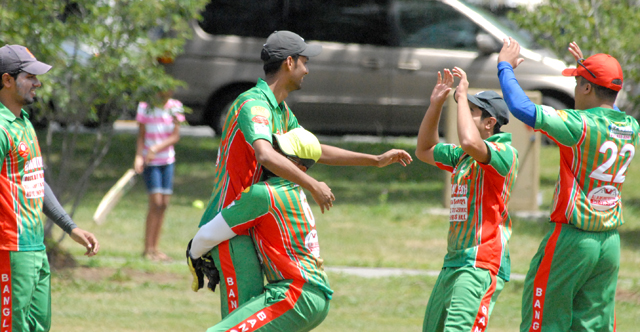 Bangladesh celebrate the fall of a wicket.