By Sam Sooppersaud | Scorecard
Yes, cricket fans, it was definitely Abdullah Syed who was responsible for the carnage perpetuated on Guyana by Pakistan. I was present, at the scene and I witnessed Pakistan’s Abdullah Syed attack the victims, with weapon in hand. He was merciless, tearing his victims to smithereens. He did not let up, even for a moment. He had one purpose in mind, to dissect and annihilate Guyana. 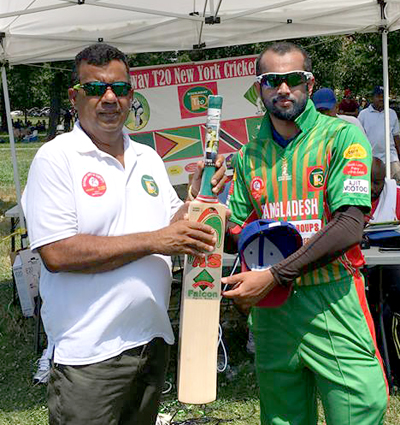 Folks, Let me put things in perspective. It sounds (reads) so gory, but rest assured, it was not the commission of a grievous felony. It was a cricket match in which the batsman blasted everything the bowlers had to offer all over the cricket field, and frequently over the boundary ropes. He almost, single-handedly brought home victory for his side.

It was Saturday, July 16, 2016, at the beautiful Baisley Pond Park Cricket Field in Queens, New York, and the fifth round of the Rockaway T20 NY Cricket Fiesta.  The two games scheduled were completed, with a bit of a hiccup, a stoppage, due to a slight drizzle. However, before I get further into what many considered the hot match of the day – Guyana vs. Pakistan, there was another fixture in last Saturday’s fifth round of Rockaway T20 New York Cricket Fiesta. It was Trinidad & Tobago against Bangladesh.

T&T VS. BANGLADESH
In the opener, Bangladesh opposed Trinidad & Tobago.  T&T immediately started the game at a disadvantage, fielding only nine players. That compounded their situation when they inserted Bangladesh to take the first knock, having won the coin toss. With two fieldsmen short, there were gaps in the field which Bangladesh exploited.

Openers N. Siddique and M. Nazu started briskly. The first wicket fell with the score on 36 in the fourth over. The batsmen kept up their aggressive style of batting, running sharp singles and dispatching the bad balls to the boundary. With good innings from N. Siddique (26), A. Islam (36), Z. Hussain (31), and Robin Das (18), Bangladesh closed their inning at 159 for 7.

Needing 160 runs for victory, T&T sent out S. Samuels and D. Roopchand to open their inning. They started off briskly, and just when it seemed that a partnership was developing, they lost the wicket of Samuels (10) in the fourth over. Four balls later Roopchand (17) was sent to the showers.

Wickets tumbled like bowling pins, with T&T losing five more wickets for the addition of only 25 runs. An eighth-wicket mini partnership of 35 between J. Khan (21) and his brother, R. Khan (13) was the other worthwhile contribution. They were scuttled out for 88 runs in 16.3 overs. 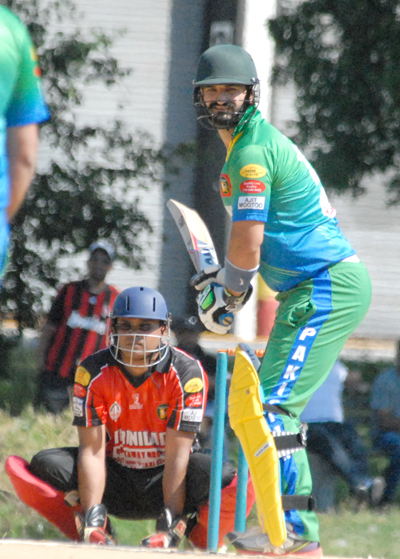 PAKISTAN VS. GUYANA
The second game of the day pitted Guyana the tournament leader, against the powerful Pakistan XI with the power-hitting Abdullah Syed. Guyana took first knock and lost the wicket of the hard-hitting Derek Narine with the score on 10 runs. The Pakistani players and their supporters were elated to see the back of the dominating Narine. With the adrenaline pouring in their veins, Pakistan sent back four Guyanese batsmen before any of them could reach double figures. The scorecard looked like a kindergarten kid randomly learning his/her numbers – 7, 2, 3, 6, and 6.

The other Guyana opener Akshay Homraj settled down and partnering with Muneshwar Patadin (18) and Andre Kirton (31), battled his way, before retiring hurt with stomach cramps. He scored an invaluable 69 runs for his team, and the Guyana inning closed at 153 for 7.

Needing 154 for victory, the Pakistani camp was confident that their batsmen could handle the task. But, then uncertainty and frustration set in. The rain that was predicted for late in the afternoon, come down. It was not a downpour, but a strong enough drizzle to suspend play. Everyone waited anxiously, hoping that the weather would improve. About an hour later, play was made possible.

The rains abated and the sun shone through the skies. Umpires Steve Kalloo and Fitz Hayles examined the field, the wicket, and the general playing conditions. They concluded that play could resume. The Guyana camp was not too happy to hear the words “let’s play ball”. After all they were the leaders in the tournament. A rainout would mean that they would split the points with Pakistan and still be in the lead. A win for Pakistan meant that both teams would have the same amount of points.

The umpires had the last say! Play resumed. After calculation – can’t rightly say what method was used – it was decided that Pakistan would require 106 runs in 12 overs if they were to be the victors of the match. Before the first ball was bowled there were various expressions of victory, as the players and their supporters were confident that they could overcome the required total.

Umar Farooq and Shazad Shahid commenced the Pakistani inning. They were on a mission. First ball 4, second ball 6. In the second over Farooq went caught in the deep. In walked trouble for Guyana, in the form of Abdullah Syed. However, it rained again. But this time, not precipitation. It rained runs. The 6’s and 4’s came in bundles. 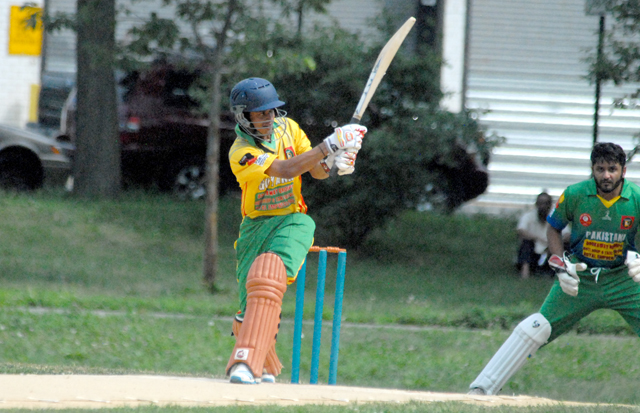 Guyana’s Akshay Homraj during his knock of 69. Photo by Shiek Mohamed

Syed was a one-man wrecking crew. He saw four of his men sent back to the pavilion, but this did not deter him. He continued blasting away at anything up, anything short, anything wide. Hey, what could a bowler bowl to curb his onslaught! My friends, nothing worked. In the 15 balls he faced, he scored 42 runs, including 3×4’s and 4×6’s.  A match winning performance. He was later named the Man-of-the-Match.

The platform was now set for the rest of the Pakistan batsmen to “bring the game home”. They did just that.  Final score: Pakistan 106 for 5 in 9.5 overs. The win with 13 balls to spare. It was an exciting game, and the fans were entertained.

As seen from the statistics three teams are on 15 points. However, Pakistan is considered the leader because of a better net run rate.

The sixth and final preliminary round of the tournament will be played on Saturday, July 23rd, at the same venue: Baisley Pond Park Cricket Field, Baisley and Rockaway Boulevards, Queens, NY. Guyana will oppose Bangladesh in the first game starting at 10:00 AM and Pakistan takes on Trinidad &Tobago at 2:00 PM.

Pakistan is leading in Net Run Rate column and may be considered the leader of the tournament at this stage. Come Saturday, anything is possible. Fans, you may be feeling that at this juncture the T&T – Pakistan game has no meaning. However, this may be the most important game of the entire tournament, to this point. T&T is in a position to be “the spoiler”. Should they beat Pakistan that would knock them from the top of the table. Either Guyana or Bangladesh will then become the “King of the Hill”.

The playoffs format is such that the leading team in the end goes on to the championship final, with the next two teams on the totem pole battling each other in the semi-final.

So cricket fans, it’s not over yet. There is lots more of exciting cricket in the Rockaway T20 NY Cricket Fiesta. Don’t you dare miss out!