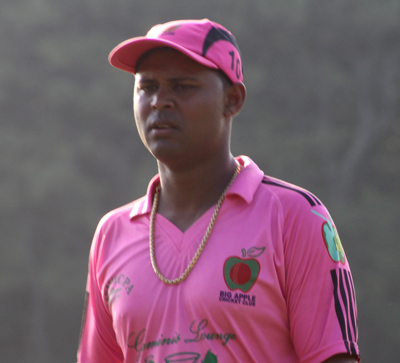 By Kerk Higgins
Sunday, July 26, 2015 saw the second meeting of the season for Big Apple Sports Club (BA) and the New York Centurions Cricket Club (NYC). It was a riveting match played at Bay Park, Nassau County on Long Island, NY, with a depleted BA team squeezing past NYC by 41 runs.

After winning the toss, BA under the captaincy of Clain Williams, opted to take the first knock; a decision which immediately back-fired, as the NYC bowlers sent back two of the BA batsmen within the first three overs. Things got even worse for BA when they lost their third wicket with the score on a measly 29 runs.

The batting pair of Dominique Rikhi and Trevis Ross looked somewhat comfortable, as they tried their best to repair the damage inflicted by the NYC opening bowlers. Unfortunately their best wasn’t good enough last Sunday, as the NYC bowlers appeared too hot to handle; and after a five-overs partnership, Rikhi lost his wicket to a short ball that never rose higher than his knees and he was out, bowled.

The NYC bowlers kept the pressure on the BA batsmen, with some very aggressive bowling, causing the BA batsmen to make unforced errors, along the way. With the score on 90 for 6 after 20 overs, the BA camp looked very worried, and knew full well that if BA lost another wicket, that would signal the end of the team’s inning. At the time BA only had eight players present, with another two players still on their way to the ground.

With a partnership worth 35 runs, and the highest of the inning, Trevis Ross punched a delivery into the hands of short extra cover, and that was the end of the BA inning. Since two of BA’s players were tardy in getting to the ground on time, the team only managed to score 118 runs, with the main contributors being Ross (46), Rikhi (34), and Telston Johnson (13 not out).

The NYC bowling was led by Ritesh Bridgelall (3/39), a tall lad who was extracting good pace and bounce off the track, and very troublesome to the BA batsmen. Well bowled Ritesh! He was ably supported by Carlton Baker (2/30).

After a very long huddle, the BA team took to the field looking very confident knowing that they had previously bowled out NYC for 57 during their first-round match. The NYC opening batsmen went about their business calmly, fully aware that if they could get to the 119 required runs for a victory, it would be the biggest upset of the 2015 season. Of course the BA team had other plans as they wanted to remain in the top spot on the league’s points-table.

Things got rolling for BA in the fifth over when Johnson bowled a double wicket maiden over, from which NYC never recovered. It was a double blow and NYC just kept losing wickets at regular intervals. After 28 overs, NYC finally succumbed at 77 all out, with only Vijay Persaud (20), Ridwan Ramjohn (15) and Carlos Bachu (10) getting into double figures. BA’s bowling was spearheaded by Mark “Chucky” Gomes (4/19); he was well-supported by Johnson (2/11), Rikhi (2/17) and Kevin Darlington (2/18).

After a sluggish batting display, BA somehow managed to pull off the win by 41 runs against a lackluster NY Centurions batting line-up. However, had it not been for the impressive bowling effort from the BA bowlers, BA would have no doubt lost their place atop the points-table, and with so much talent at its disposal.