By Kerk Higgins
Sunday, July 12th, 2015 signaled the start of the second round of the EACA Cricket Zone 40-Overs tournament.  To kick things off, Big Apple (BA) was matched up against East Side Warriors (ESW) at Brentwood cricket field on Long Island. 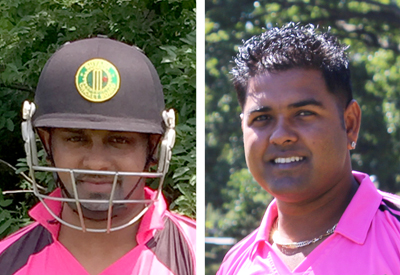 Richard Ramdeen (left) and Zaheer Saffie shared a partnership of 237 against East Side Warriors.

BA won the toss and batted first on a wicket that has produced some of the highest run totals of the season.  BA opened the batting with Dominique Rikhi, who only lasted a mere three deliveries before he was back in the pavilion having scored one run, and Richard Ramdeen who is making a comeback after a year away from the game.

With the score on 2 for 1 in the first over, it was Captain Zaheer Saffie who joined Ramdeen.  The pair had the ESW players toiling in the field for the next 20 overs, as the two batsmen were brutal on the ESW bowlers, hitting the ball to all parts of the ground, causing a few delays as fielders retrieved balls from the surrounding bushes.  Ramdeen who played four first- class games for Guyana and represented the West Indies at the Under-19 ICC Cricket World Cup in 2006, was in a “no nonsense” mood in a shot-filled 113 (12 fours and 8 sixes) off 57 balls with the score on 239.

The Big Apple batsmen never let up as they scored 178 off the last 16 overs of the inning, which was reduced to 36 overs because of ESW’s slow over rate.  All of the BA batters took advantage of the lackluster bowling by ESW.  After 36 overs, BA’s final tally was 417/4 with the main contributors being Saffie, 140, (16 fours and 1 six) off 92 balls, Ramdeen, 113, Trevis Ross, 64 not out (4 fours and 5 sixes) off 27 balls, and Clain Williams, 54 (six fours and 3 sixes) off 35 balls.  For the ESW bowlers, Sabeeh Rafique, Bakht Raiz, Usman Rafique and Ali Murtaza each enjoyed one wicket apiece.

Needing to score at 11.5 runs per over, it was an uphill battle for ESW.  The BA team wanted to get the match over with as soon as possible.  In doing so, they made light work of their opponent, dismissing ESW for 60 runs in 13.3 overs.  The only ESW batsman to reach double figures was Sabeeh Rafique with 24. The chief wrecker for BA was Amarnauth Persaud with exceptional figures of 5 for 10 off 3.3 overs.  He was well supported by Telston Johnson with 2 for 18 off 6 overs. Dominique Rikhi and Brandon Dat each had one wicket apiece.

The action continues this weekend with BA travelling to Bay Park to take on NY Centurions, and ESW playing Galaxy at Brentwood.