Best In The City 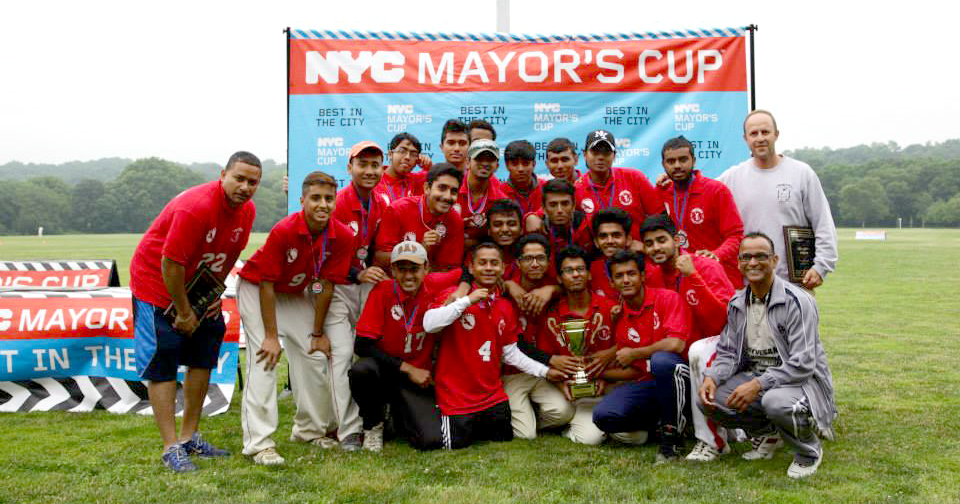 By Sam Sooppersaud
The game was billed as the New York City Mayor’s Cup All-Star Game. But, the performances of the players were anything but, all-star performances. The players on the Queens squad, I mean. Not that they did not try, but a higher force, Mother Nature, dictated their fate. It was weather “for the ducks,” as they say, a Caribbean colloquial reference for periods of heavy rainfall. Not just a rainy day, but a terrible day for cricket. Why the game wasn’t called off, is baffling to me, and to numerous fans who openly expressed similar sentiments?

The Public Schools Athletic League cricket program concluded on June 14th, with Richmond Hill High School comfortably defeating John Adams High School, to become PSAL Cricket Champions, for the first time. John Adams was the defending champion, having defeated Hillcrest High School in 2014. Once the 2015 season was over, the very best players were selected to participate in the showcase game, The Mayor’s Cup.

For the second year in a row, a Brooklyn-Manhattan-Bronx (BMB) combined Xl took on a Queens Squad. The players were selected based on their statistics during the 2015 season. On paper Queens fielded an “unbeatable” team, judging from the stats. Not that BMB did not have their share of superstars. Included were batsmen who had scored an aggregate of 275 runs and more; and bowlers who had taken 16 and more wickets, during the regular PSAL cricket season.

A small crowd was on hand to watch the game, mostly made up of parents and relatives of the players. The weather forecast had called for rain showers all throughout the day of the game, Saturday, June 20th at Van Cortland Park, in the Bronx. This definitely deterred many from attending the game.

At 1:00 pm the Toss was spun, under overcast conditions. The rains were threatening, but did not show up until after the toss. BMB called correctly and immediately told their Queens counterpart to take first knock. Immediately after, the clouds opened up with a steady drizzle. Not a drenching rainfall, but enough water to soak the matting and make the outfield grass very slippery.

The drizzle persisted for close to three-quarters of an hour. By the time the game was started, the matting was soaked and slippery, much like the outfield. Yet, the people in-charge decided to go along with the game. It is a miracle that none of the players was injured, slipping and sliding as they were during the game. The umpires had waited a while for the matting “to air out.” There being little or no sunshine, it was still damp when play started. 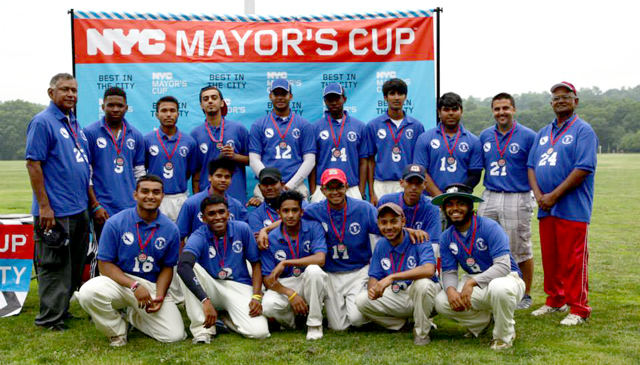 As was stated before, Queens took first knock. They opened with Shafat Choudhury from Newcomers High School. He had scored nearly 300 runs and taken 29 wickets during the regular season, and received the Most Wickets Award, jointly with a player from another High School. The other opener was Amran Ahmad who scored over 500 runs during the regular season and received the Wingate Award for 2015, an award given to the Senior scoring the most runs in their Senior year.

The bowlers were losing their stepping. The batsmen were sliding. The outfielders kissed the wet grass on many plays. Like I said, it was a disastrous day for a cricket match, at least, for the first half of the match.

The ball kept low; there was absolutely not much bounce. At least four batsmen were bowled by “creeping” deliveries.

Shafat went first via the run-out route. The batsmen attempted a second run to a ball hit to long-on. The batsman could not find his grip on the wet matting. He was well short of his base when his wicket was put down. From then on wickets fell in quick succession. The BMB bowlers set the Queens batsmen further backward with some tight, accurate bowling. Queens finally succumbed for 62 runs. Only one batsman, Alex Husain (16) reached double figures.

On the bowling end, Biswajit Ramsingh took 3 for 9 in 3 overs. Malek Karim ended up with figures of 3 for 5 in 3 overs. They were ably supported by Burhan Saeed (1 for 14) and Syed Forhaduddin (1 for 13).

In reply, BMB knocked off the required runs in 7.3 overs. There was no way that Queens could have won the game, other than bowling out the opponents. By the time they batted, the matting has dried out considerably, the outfield grass was dry and the ball was racing to the boundary.

The required runs were knocked off, while losing only one wicket. In the end Syed Forhaduddin was not out on 21 and Hamza Khushnud was 19 not out. Shafat Choudhury took the only BMB wicket to fall.

The presentation ceremony was held at the conclusion of the match, and the following players received awards: Malek Karim, Best Bowler, (3 for 5), Syed Forhaduddin, Best Batsman (21 runs), and Most Valuable Player, Syed Forhaduddin (21 runs and 1 wicket). The winner’s trophy was presented to Head Coach, Mohammed Khan. He was warmly congratulated by the Queens Coach, Sam Sooppersaud.  All players and coaches were awarded with commemorative medals.

The dinner following the presentation was delicious, with players, fans, an officials dining on Fried rice, chow-mein and chicken.