When Michael Lentz joined the Physical Education Department at Bonnie Branch Middle School in Howard County, Maryland, he saw that cricket was on the curriculum. He said to himself, “Cricket? Oh, I’m not going to do that.” But, then he saw the ethnic diversity in the student population there, and he found out that Howard County Public School System (HCPSS) wanted to promote more international programs. So, he decided to look into this sport that was foreign to him. He did his research and became fascinated by cricket. 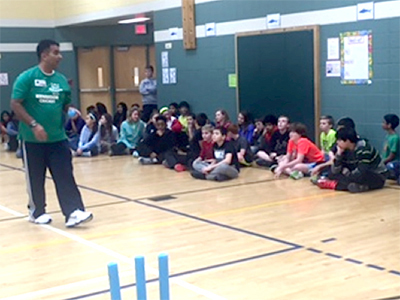 When time came to do the cricket module during PE, he found that his students enjoyed it tremendously. In 2015, he even formed a cricket club at the school, and 18 students joined the club: 16 boys and 2 girls. They practiced after school for 10 weeks. But due to the lack of competition, some students lost interest since there were no other teams to play against.

But now, that is about to change. Sham Chotoo from the Bowie Boys and Girls Club and Maryland Youth Cricket Association visited Bonnie Branch for two full days in February and ignited the passion for cricket in the students with his cricket demonstrations. Afterwards, flyers were only given to the students who were interested in playing cricket for the team. About 140 students took home flyers to their parents. Twenty students then signed-up to play on the cricket team. Many more students wanted to play, but they were already committed to other sports.

The students from Bonnie Branch will play for the Montgomery Sharks Cricket Team in the Washington Area Middle School (WAMS) Cricket League. These students will be making history by being the first set of students from Bonnie Branch and from Howard County to participate in the WAMS Cricket league, which is the first middle school cricket league in the USA. This league was formed by the BBGC in Prince George’s County, Maryland. The league started with 4 teams in 2015, and in 2016 there are 9 teams, including the Montgomery Sharks. Principals, teachers, and parents have seen the benefits of the cricket program on the students and are very supportive of cricket, which is the second most popular sport in the world. Four parents have already volunteered to coach the team: Mr. Kunal Bose, Mr. Sudhakar Naraparaju, Mr. Jacob Kuruvilla, and Mr. Kareem Syed.

There is a lot of chatter in the hallways of Bonnie Branch about cricket, and the students cannot wait to get started. The cricket season starts on March 14 and ends on May 27. All practices and matches will be done in the evening from 6:00- 8:00pm during the week. Some matches will be at home and some will be away. Let’s go Sharks!!!