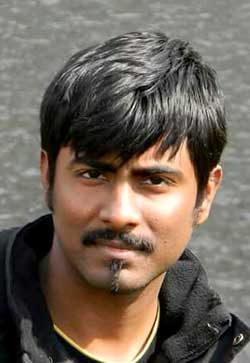 Archan Chakroborthy finished with figures of 3 for 8.

However, they made the sacrifice count by comprehensively winning their match against the Commonwealth Cricket Club A (CCC “A”), as if they were angry to have missed watching the fiercest rivalry between the two cricket giants; India and Pakistan.

Boston Eagles won the toss and elected to field. Abhinav Sharma and Soumendra Basu (Basu) opened the batting for CCC “A”. The opening bowling duo, Varuna Aiyanna and Nikhil Sikka, barely put a foot wrong and bowled with accuracy and intimidating pace. Basu got bowled out on an in-swinging delivery when he was at 1. Nikhil, playing only his third game in the Massachusetts State Cricket League (MSCL), struck in his third and fourth overs as Abhinav was edged to the keeper on a rather quick out swinging delivery and Babar Abasi sent up a skier.

It was a disappointing start to the innings for CCC “A” as they lost three wickets for 30 runs before the end of the power play. Nikhil bowled a tidy five overs spell claiming two wickets with only 18 runs on the board. Nipun Patel and in-form Shreenath Rajagopalan tried to carefully maneuver the sinking ship and managed to coxed a 45-run partnership. However, Harshal Patil put a damper on things when Shrenath, in an effort to relieve the burgeoning pressure, lofted the ball up in the air and got caught by Nikhil at long-off. When Harshal struck again to dismiss the other set batsman, Nipun, the CCC “A” were in a major tangle at 77 for 5. 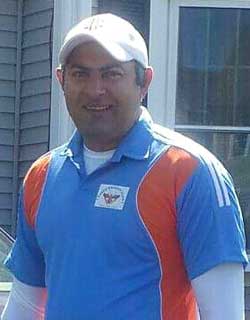 After losing Nipun, CCC “A” needed something spectacular but they hit further trouble against the spinners. Both spinners, Mohammad Bilal and Archan Chakroborthy, feasted on the middle order batsmen. Munawar Abasi and Abdul Wahab attempted big hits off Bilal and Archan respectively, missed and were bowled. The wickets fell like dominos with. CCC “A” mustering a paltry 99 all out in 28 overs against an excellent collective bowling effort headed by Archan (4-0-8-3) and Bilal (5.2-1-14-2), both of whom provided their competition-best bowling performances.

Muqadas Raza (Raza) and Mithun Reddy (Mithun) opened the batting for Boston Eagles as they aimed to end the match before the looming rain showers. It was an easy target for The Boston Eagles to chase down, however, Raza made it look even easier. He thrashed the CCC “A” bowlers, and hit some huge sixes and smashing fours during the power-play. There are only a handful of batsmen in the MSCL league who can instill the kind of fear Raza can in bowlers. Showing no mercy, Boom Boom Raza finished his 50 in just 28 balls. The score was 64 runs in 6 overs when Mithun got out at 11. Raza went on to hit another boundary and a quick double before he perished (56 runs off 33 balls) to Wahab’s off-spin bowling, while trying to manufacture another big one in the V. Boston Eagles lost a couple more wickets in quick succession, however, they chased down the target in the 17th over.

Boston Eagles are not only at the top of their game but they are also sitting on top of the points table going into Week 5 of the season.