By Nikhil Sikka and Raghunandan Sridhar
The summer is in full swing in New England and so are the Boston Eagles. On Sunday, June 18 the Boston Eagles registered their fifth consecutive win of the season beating the resilient Challengers Cricket Club (CCC) A. It was a hard-fought match between the two teams and it almost went down to the wire but Boston Eagles stood their ground towards the end and came out on top. 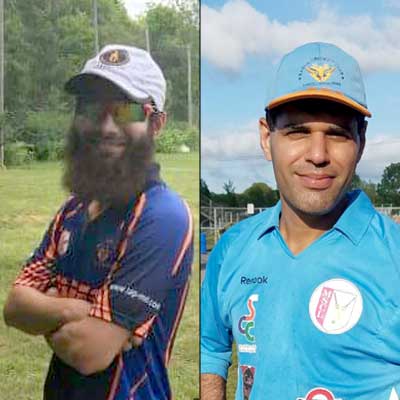 Mohammad Bilal (left) picked up 4 for 26 and scored 25, Harshal Patil produced a crucial knock of 28.

Boston Eagles won the toss and elected to field first. Narasimha Challa and Nikhil Sikka began the bowling attack (literally!) for Eagles. It was Challa’s day from the beginning. The swing, the line, the length, everything just fell into place for him and he was absolutely unplayable throughout his bowling spell. On the other end, Nikhil’s raw pace and aggressive bowling style complemented Challa brilliantly; and as a result, CCC A lost their opening batting duo in quick succession. Arun Mathew who came in as the first down batsmen played sensibly against the opening fast bowlers. Nonetheless, Challa and Nikhil kept on rattling the rest of the batsmen and Challa, took a couple of more quick wickets before he finished a tidy 8-over opening spell claiming three wickets with only 15 runs. The scoreboard read 32 for 4 at the end of 10 overs.

Gopal Akarapu and Arun had a respectable partnership for the fifth wicket and were able to amass 58 runs in the next 14 overs. Mohammad Bilal, a deceiving leg-spinner, who had been bowling beautifully, finally put an end to the partnership when Gopal was edged to the keeper. Arun had been at the crease since the second over and he finally opened up and smashed a couple of sixes and a few boundaries to release the increasing pressure from the spinners.

The Boston Eagles skipper and a rather quick off-spin bowler Raghunandan Sridhar (Raghu) was able to take advantage of the pressure created by spin-twins Guru Madhavan and Bilal by picking Sunil Vala’s wicket in his first over. CCC were 120 for 6 in 30 overs. The next batsman was Ravi Singh who has been an exceptional all-rounder for CCC over the past few years. As a dependable veteran, he provided the necessary anchor for the rest of the inning.

However, Bilal struck again and got Arun out (66 runs off 79 balls) when he tried to manufacture a big shot in the square-leg region. Bilal kept bowling tight and got a couple of more wickets while Ravi played sensibly to keep the scoreboard moving. CCC finally folded at 164 for 10 in 38.4 overs. Bilal was the most prolific wicket-taking bowler for the Boston Eagles, and topped his previous competition-best bowling performance (8-0-26-4).

Boston Eagles’ opening pair, Raghu and Mithun Reddy, provided a good start. But Raghavendra Kulaspar (Ragha) got Raghu bowled out in the 10th over when the score was 47. In a matter of minutes, Ragha struck again in the same over and sent Mithun packing as well. A couple of overs later, Sanjay Krishna got bowled out as well and Boston Eagles were in tangle with 52 for 3. Bilal and Anil Yedugani provided the much needed partnership for the fourth wicket that included some of the finest and well-timed shots you will ever see by Bilal. However, Bilal got run-out by arguably the best fielder on the CCC’s team, Ravi that is, when Bilal and Anil tried to squeeze in two runs on a rather slow outfield.

Muqadas Raza (Raza) was next and he was hoping to continue his fearless attack on the bowlers but he got bowled out by Ragha when he was at 18. Anil followed Raza not long thereafter. Boston Eagles were in a rut with 121 for 6 in 23 overs. Make no mistake the pressure was palpable and Eagles had their backs against the wall, but Harshal Patil, a.k.a. Mr. Dependable, played a very patient innings of the highest quality and was aptly supported by Nikhil, who was brilliant as well given the circumstances when he walked into bat. The pair put on a crucial 27-run partnership and finished the chase in the 37th over for the victory.

Boston Eagles looks like a well-balanced and disciplined unit thus far, and it will be interesting to see if they can keep the momentum going. Stay tuned!