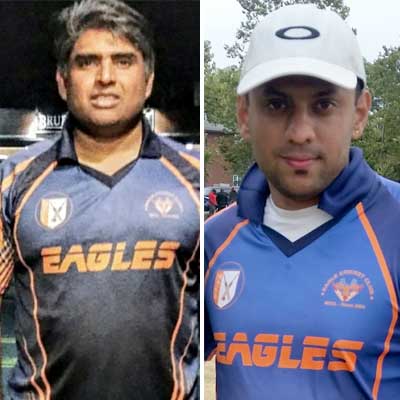 Ramakrishan Boyanapalli (left) struck an even half century, while skipper Raghunandan Sridhar scored an unbeaten 79 and picked up three wickets.

Boston Eagles skipper Raghunandan Sridhar (Raghu) won the toss and put the home team Boston Gymkhana to bat first. Explosive openers Pavan Chakravarthy (Pavan) and Srikant Mokkapati (Srikant) played initial fast bowlers well and put on a 53-run partnership in the first 10 overs, with the pair looking comfortable in the middle. Boston Eagles knew they needed a wicket or two quickly given the long batting line-up of Boston Gymkhana. Coming in at first change, Raghu gave the double breakthrough by picking Srikanth’s wicket first, caught brilliantly at the square-leg boundary by Karthik Patel, and followed it by immediately dismissing Pavan, clean bowled for 40 (43). From the other end, former Peshawar Panther’s talented leg-break bowler Muhammad Bilal did more damage by picking up the in-form Pratik Dudhane very early in his inning. Thereafter, wickets fell at regular intervals because of the tidy and accurate bowling by the spin duo of Raghu (8-0-23-3) and Bilal (8-0-26-2). Boston Gymkhana’s middle order batsman Abhirup Banerjee (Abhi) started to re-construct the innings and was aptly supported by Prathamesh Jakkanwar, 25 (41) and Boston Gymkhana’s skipper Amrinder Andy Singh, 24 (19). The cumulative score for Boston Gymkhana was 216 for the loss of 8 wickets in the stipulated 40 overs, with Abhi 53 (67), finishing as their top scorer.

In reply, Boston Eagles’ inning didn’t start as anticipated, as their opening in-form veteran batsman Joseph Buffong got out in the first over, caught at extra-cover. His opening partner, hard-hitting Suhas Bhanushali (Suhas) took the onus on himself and started to scythe through the Boston Gymhkhan’s bowling, peppering the boundaries with lofted drives of the finest quality. He was complimented perfectly by the incoming first-down player Ramakrishna Boyanapalli (Rama) whose technically sound, calm and collective batting approach helped to steady the ship thereby providing a solid foundation. Suhas’s fast-paced inning came to an end when he was dismissed for 37 by one of MSCL’s premier left-arm spinners Purak Oza (Purak), caught at the long-on boundary. Boston Eagles were 67/2 in 13 overs, when the skipper Raghu walked in. With the benefit of past experience to fall back on, Raghu immediately started to rotate the strike and continued to keep the scoreboard ticking by scoring at a steady pace. Hitting the balls in gaps for quick 1’s, 2’s and occasional boundaries by punishing the bad deliveries, Raghu built an important partnership of 50+ runs with Rama, who after scoring a well-deserved half-century 50 (79) got out for a loose shot caught at point. The game was on a knife’s edge, Boston Eagles were 120/3 in 25 overs, requiring 97 runs in 90 balls. Boston Gymkhana’s excellent spin trio of Andy, Purak and Pavan made it hard and challenging for Boston Eagles batsmen to stay on top of the required run rate.

Boston Eagles lost three more crucial wickets for the next 60+ runs. At one stage, the equation was 34 runs in 4 overs. Raghu still at the crease, as determined as ever to get the team home, got the perfect impetus, when the tall lanky all-rounder, Nikhil Sikka, playing with a broken finger, hit a huge six over the cow corner and the pendulum slowly started to swing towards Boston Eagles. With momentum surely behind the batting side and the Eagles club members cheering and encouraging from outside, Boston Eagles’ batting pair of Raghu and Bilal chased down the target with 2 balls to spare, with Raghu finishing it in style by hitting a boundary over the mid-off and remained not out scoring 79 off 82 balls.

Overall, it was a great game of cricket played between two very talented teams with good sportsmanship and fun banter from both sides. A well-deserved win by Boston Eagles which was impeccably led by skipper Raghu. Boston Eagles remain unbeaten so far in 2018, with three wins and one tied match.