The CCA U12 team played two 25-overs matches with SoCal Juniors consisting of some Under-13 players on Saturday, May 23, 2015 at the Smith Murphy Park grounds in Buena Park, CA. The SoCal Juniors was coached by Mumtaz Yusuf. The CCA Under-12 team was victorious in both matches. 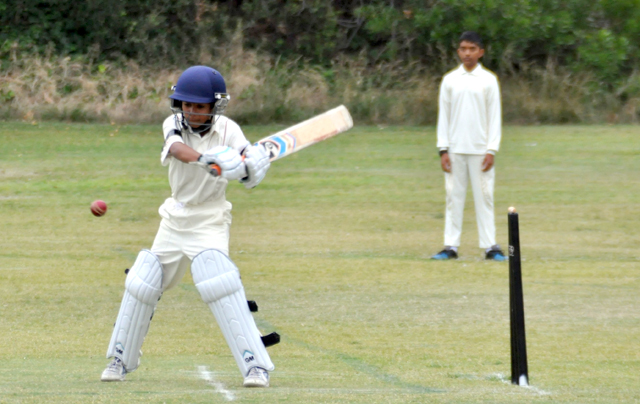 Rajat Sood square cutting on his way to 83 not out.

The key highlight of the match was Ved Patel’s fifty and the unbeaten 121 run third-wicket partnership between Ved Patel and Rahul Jariwala which allowed CCA to post a competitive total. When the South Cal Juniors looked like making a serious run at the target, Ved bagged a couple of late wickets, including South Cal top scorer Arjun Menon, to enable CCA to win comfortably.

The CCA team prevailed in a closely fought match. CCA started very strongly with a 67 run opening partnership with Ved Patel once again top scoring. Arjun Menon from South Cal Juniors played a valiant knock of 62 during the chase and was the highest scorer for South Cal Juniors team in both matches.

Two key performances from CCA boys made this match a one-sided affair. One was Rajat’s stroke filled unbeaten 83 in a 113 run second wicket partnership with Kanish who also scored a fifty. The other was 10 year old Anuvrat’s spin bowling which fetched 8 wickets for only 4 runs, including 4 wickets in a single over.

The main highlight of the match was the 125 run second-wicket partnership between Aman and Kanish who scored his second fifty of the day. The SDCC team lost wickets at regular intervals thus making it an easy win for CCA.

The tour was sponsored by Silicon Valley based Ruckus Wireless through their community support program. The guiding principle of Ruckus Wireless community support programs is to focus on diversity. The company’s investment in promoting youth cricket at the grassroots level of the CCA is very commendable, Biju Nair, VP and General Manager at Ruckus Wireless said, that Ruckus believe sports play a key role in building relationships, and is a way of creating an eco-system wherein people can come together and join hands towards building a nation’s identity through a team sport. CCA applauds the continued efforts of Ruckus in providing opportunities at the grassroots level, for quality cricket in the USA.

Biju Nair said, “Ruckus is excited to join hands with CCA on a global front to build and promote youth cricket in the USA, and we also offer our continued support of all local and international cricketing tours organized by CCA. We believe cricket is a game which has a unique capability to build teamwork in youth cricket.

Overall highlights –
Most Runs – Kanish Bhalla with 130 in 4 games and Ved Patel with 101 in 2 games
Highest Individual Score – Rajat Sood 83 not out against SCYAC
Best Bowling – Anuvrat Shukla – Total 9 wickets, with 8 wickets for 4 runs in the game against SCYAC