Scorecards: Canada vs Bermuda | USA vs Suriname
Canada and USA remain undefeated in the ICC Americas Division 1 tournament after an eventful day two. Whilst showers kept the ground staff in Indianapolis busy, Canada proved too strong for Bermuda and in the afternoon USA asserted their authority in a win over Suriname. 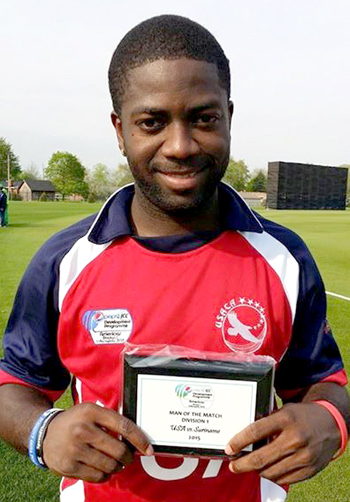 Canada won the toss in the first match of the day and immediately took the attack to Bermuda. Ruvindu Gunasekera and Rizwan Cheema displayed a combination of brute power and lovely timing to take the score to 49 in the seventh over before Cheema was dismissed for 29 from 21 deliveries. Nitish Kumar and Gunasekera continued the Canadian momentum and took the score to 94 before Kumar was bowled for 20.

Kumar’s dismissal sparked Bermuda to fight back in the last 8 overs thanks to Jacobi Robinson’s 3-13 from his 3 overs, which included the prized wicket of the eventual man of the match Gunasekera for a well made 62 (54 balls). The late wickets from Bermuda helped to restrict Canada to 143/8 when 160 seemed a realistic target.

Rain fell during the innings break with the Duckworth Lewis method reducing the target to 105 from 13 overs. The chase appeared too greater task for Bermuda, as they struggled to establish a partnership under the pressure of tight Canadian bowling. The best contributors with the bat for Bermuda were Captain Janerio Tucker with 20 from 13 balls, including two big sixes, and Tre Manders 17 not out, however it wasn’t enough to trouble Canada falling 34 runs short of the target at 70/8. For the Canadian’s, Cecil Pervez was the pick of the bowlers with 2-5 from 2 overs. He was ably assisted by Nikhil Dutta and Jimmy Hansra who also chipped in with two wickets apiece with the ball.

In the afternoon game Suriname won the toss and batted first against the USA. They were much improved on the first performance with the bat, largely thanks to a solid start from Shazam Ramjohn (24 from 30) and Muneshwar Patandin (20 from 18). Ramjohn and Patandin gave Suriname a solid platform however the USA bowlers rallied and continued to take wickets through the second half of the innings. The main contributors for the USA were Karen Ganesh with 3-17 and Timil Patel 2-16. Suriname was restricted to 106/8 from their 20 overs.

In reply, the USA stuttered early losing two wickets in the first two overs, with Taylor (1) and Dodson (0) falling cheaply. However, they consolidated beautifully through a great partnership of 101 to take the USA past Suriname’s total in the 14th over. Nicholas Standford asserted himself as player to watch with some brilliant boundaries over cover in his dominant 64 not out from 49 balls. Standford was ably assisted by USA’s form batsman, Fahad Babar, who again remained undefeated on 35 from 30 balls.

The comfortable victories to Canada and USA set up a mouth-watering clash today between the two undefeated sides, while the afternoon game will see Bermuda take on Suriname as both sides look for their first win of the tournament.

USA versus Canada commences at 10am and Indianapolis World Sports Park.