By Sudharsan Ramarao
T20 Electric Cricket League
Highlanders Clip Falcons In Convincing Win
Losing the toss and being put in to bat, Falcons started in the worst way possible, losing two wickets in the very first over of the inning. Dhairya Dixit was run out without facing a ball on the very first ball of the inning while trying to steal a non-existent single. Saravanan, their batting sensation, played across the line and top-edged the third ball from Ashok Adikoppula to a comfortable catch at short mid-wicket.

Hariprasad Amanapu and Varun Penmatsa tried to steady the inning, but Hariprasad was soon caught behind off a lovely delivery from Saurabh. Vishal then joined Varun and both put together a decent partnership to take the team past the 100-run mark. Varun was run out in the last over for 43. Vishal made a run a ball 21. With plenty of bowling options available, the Highlanders used 8 bowlers in total. Saurabh Verma was the pick of the bowlers., mixing his length and pace beautifully and kept the pressure on the Falcons batsmen. Falcons finished on 112.

Chasing a modest target of 113, the Highlanders started off patiently playing safe cricket. The opener Mike Persaud latched on to the bad balls and dispatched them for timely boundaries while Sudharsan held on to the other end. The Highlanders made 55 for their opening wicket. Sudharsan then got bowled by Hariprasad for 16 while trying to up the scoring and Mike Persaud was stumped leg-side for a well-made 36. Chinmay Ghag and Shoaib Hassan, coming in at number 3 and 4 respectively played some pleasing shots and took the Highlanders home with three overs to spare. Both were not out on 20 and 14 respectively. The Falcons conceded 27 extras with 19 of them coming off wides. For his tight opening spell of two overs for just six runs and his steady inning of 36, Mike Persaud was adjudged Man-of-the-Match. 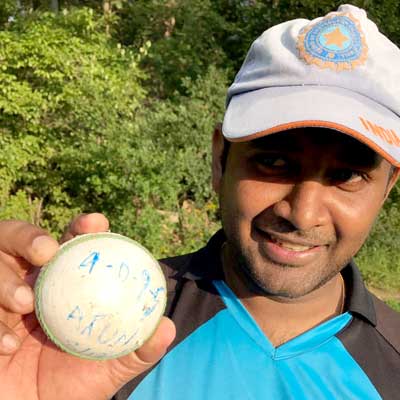 Knights Cruise To Win Against Gujarat Lions
Knights skipper Raj Ardham won the toss and put the Gujarat Lions in to bat. They opened with Mehul Goswami and Hardik Patel, as they started off briskly scoring timely boundaries especially Mehul who was strong off the front foot. He drove beautifully through the cover region and was comfortable hitting the ball over mid-off and mid-on. Gujarat Lions were 37 for no loss in the sixth over, when Vamsidhar Varmakonda, the Knights allrounder, struck twice in consecutive balls to pull back the Lions.

Openers Mehul Goswami and Venkat Gantannagari were the casualties. Raj Dontireddy, who came in as the first change bowler, then had the other opener Hardik Patel caught behind. Gujarat Lions were 49 for 3 at the end of nine overs. Arun Ghanta, who was all the while doing wicket-keeping, gave up his gloves and came on to bowl. He struck gold straight away picking up the Lions skipper Bhavik Dalsania. Bhavik, the Lions batting mainstay, got warmed up with a nice boundary but got out before he could explode. With the cream of the batting already gone, the Knights spinners Arun Ghanta and Mithesh Jain Godha ran through the Lions lower order and pickingup 4 and 3 wickets respectively. Gujarat Lions succumbed to a below par 81 in the 17th over.

With just 82 to win in 20 overs, Knights openers Raj Ardham and Jayaram Manukonda played without any pressure especially Raj who looked to be in great form. His huge six over long-off off the bowling of Venkat came right from the sweet spot of his bat. The sound of the ball hitting the bat reverberated throughout the ground. Jayaram, the other opener, also got in the groove by hitting three sweetly timed boundaries.

Knights were comfortably placed at 39 for one by the end of the power-play with Jayaram getting bowled by Dhruv Patel for 16 in the last over of the powerplay. Vamsi then joined Raj in the middle and started off positively by scoring two quick boundaries but was out LBW to Bhavik Dalsania, who had then resorted to left-arm spin. Siva Dharman coming in at nuber four got out for two, courtesy of an ugly heave. The athletic Ranadheer Sammetta joined Raj in the middle and gave the finishing touches to the chase. Knights reached their target in their 12th over. Raj was not out on 18 while Rana made an aggressive 20 off just 15 balls. For his brilliant wicket-taking spell of 4 for 14 that took the game away from the Lions, Arun Ghanta was adjudged the Man-of-the-Match.

Pardha Scores Breezy Half Century As JETS Win Against Akhadi
JETS won the toss and put Akhadi in to bat. The Akhadi openers started slowly. Harsh Jogi, their batting mainstay, was in good form. He struck three boundaries with the first few overs and looked settled for a big score. The other opener Ram held on to the other end. 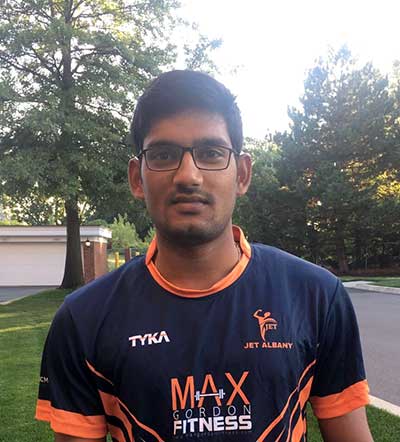 Although Akhadi didn’t lose any wickets until the 9th over, they just scored a modest 41 from those overs. Then the floodgates opened for JETS bowlers. First it was Harsh who top -dged a slower one from Chakri Reddy and was out for 25 to an excellent catch by Abishek Penti. Chakri Reddy went on to get another three wickets wreaking havoc on the Akhadi middle order. Nirav Mistry resisted for a while and scored 24 taking Akhadi past the 100 run mark. None of the other batsmen kicked on as Akhadi ended their innings at 104.

Chasing 104 to win, JETS lost their opener Sridhar Sagi who was out for two. Abhishek Penti, the other opener, and Anand coming in at three put up a brief partnership to take the JETS to 36 runs at the end of seven overs. Both soon fell in quick succession putting the JETS chase under pressure. But Chakri Reddy and the JETS all-rounder Pardha Mantana coming in at 5 and 6, anchored the inning and put up a match-winning partnership. While Chakri was content on holding an end and rotating the strike. It was Pardha who made the headlines with an attractive half-century that included beautiful pickup shots thru the midwicket region, over the top drives thru the long-off and long-on region, and a huge six over the cow corner.

In all Pardha scored six boundaries and one six in his 43-ball half century. He remained not out till the end and took the JETS home with three overs to spare. For his tight medium pace bowling that fetched him a wicket and a match-winning inning of 52 undefeated runs, Pardha Mantana was adjudged Man-of-the-Match.

RPI Beat The Panthers To Claim Their First Win Of The Season
RPI won the toss and put the Panthers in to bat. Kiran Vishnu, the Panthers opener who carried his bat scoring an excellent half-century in the last game, retired hurt on his fifth ball of his inning pushing the Panthers to back foot straight away. Christopher the other opener hung around for a while and scored 19 off 25 balls. Krishna coming in at 6 anchored the inning and scored an excellent 31 runs off 26 balls. None of the other batsmen kicked on to a big inning, as a result, Panthers finished their inning at a below par 117. For the RPI, Arun Bhaskaran picked up 3 wickets in 3 overs with his off-spin.

Chasing a modest 118 to win, the RPI batsman started their chase slowly. Both the openers were content on playing safe cricket. They scored just 18 off their first five overs. Panthers opening bowlers Malla Reddy and Anvesh Chikulapalli then cleaned up both the openers in quick succession. Nithyagopal Goswami coming at 3 held the inning together and took the game deep. He scored an excellent 29 off 24 balls that included five boundaries. RPI lost three more wickets in the middle but that was only a minor blip in their chase, as the two Aruns, (Arun Bhaskaran and Arun Gandhi) finished off their chase in the 19th over. Arun Bhaskaran was not out on 18 that included lots of running while Arun Gandhi scored an aggressive cameo of 24 off just 16 balls that included three boundaries. For his excellent off-spin bowling that fetched him three wickets and his innings of 18 runs that finished off the match, Arun Bhaskaran was adjudged Man-of-the-Match.

Maurice Persaud Empire Cricket League
Good Vybz Give Walkover To Tricity CC
What was supposed to be a mouthwatering clash between two top teams in the league finished even before it was even started. Good Vybz gave a walkover to Tricity CC due to unavoidable circumstances.