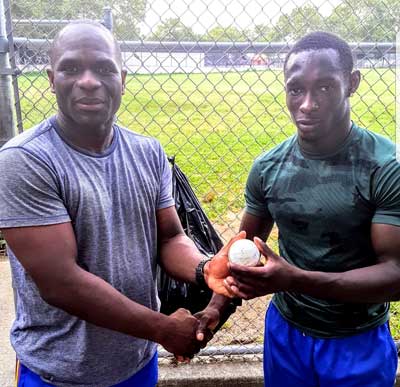 Carmichael snatched up 5 for 13 on Sunday, July 16th and Ward followed it up with 5 for 19 on Sunday, July 23rd to spearhead two victories heading into the League’s playoffs. The two wins come after RHLCC suffered a 5-wicket defeat at the hands of Galaxy Cricket Club on Sunday, July 9th.

RHLCC vs LIUCC – July 23rd
Despite overnight rain the Baisley Cage wicket and outfield was hard enough to encourage RHLCC captain, Carmichael, to have his batsmen take first strike when the coin fell in his favor. Long Island United Cricket Club (LIUCC) struck in the first over before Altaaf Habibulla (13) and Trevor Henry (28) added 40 for the 2nd wicket. Henry would fall shortly after. Warde (35) and Carmichael (37) added valuable contributions but did not carry on to leave RHLCC at 129 for 5 in the 25th over.

Leon Mohabir, who has been showing good form with the bat in recent games, was joined by Danesh Deonarain and the duo looked to build a partnership to add some beef to the inning. Mohabir turned out his highest EACA 40-Over knock when he struck 7 fours in an inning high 43. He headlined a vital 73 runs 6th wicket partnership with Deonarain. Deonarain struck 2 fours and 2 sixes in his knock of 31.

The efforts were good enough to have RHLCC post 213 on Baisley Cage with heavy grass. Bowling for LIUCC Jalal Bubrak picked up 3 for 38, Rawala Zaman 2 for 26 and there was a wicket a piece for Atiq Mufti and Ishtiak Khan.

Inzy Khan started the defense of the just below par total for #TheBlueNation by scalping the two LIUCC openers and restricting the chase to 39 for 2 after 10 overs. Waquas Ashiq and Amir Javaid launched a counterattack, however. The pair added 46 in the next 5 overs finding the boundaries regularly.

Wahid Ward picked up the attack following the water break and turned the LIUCC inning on it’s head! The veteran utility player, bowling for the Foch Boulevard end, immediately neutralized the threat of Shiq, trapping him LBW for 28 off his 2nd ball. He returned in his next over to bowl Javaid (28) off the first ball and scalping another LIUCC batsman 2 balls later. The pressure built by the falling wickets resulted in a run out leaving the chase at 98 for 6 in the 21st over.

The Wahid Ward show was not finished, he continued to pick up two more wickets to cap a 5 wicket haul and completing a spell of 8 overs, 1 maiden, 5 wickets for 19 runs. After a short lower order resistance which saw Ghulam Mustapha post an inning high 41, Inzy Khan returned to polish off the tail and finish a season best spell of 7.4 overs, 4 wickets for 21 runs and sealing a 31 runs victory for RHLCC.

Victory CC vs RHLCC – July 16th
The coin fell in RHLCC’s favor in brilliant batting conditions and captain Carmichael elected to bat first. Victory CC (VCC) struck early before Trevor Henry and Naresh Rambharos moved their side past 50. Henry dominated the partnership, negotiating the uncertain bounce on the Hicksville wicket. He made batting look easy striking five fours and three sixes getting to a half century.

The wicket eventually took a toll on the RHLCC line up. The fall of Rambharos (8) with the score on 50 quickly slipped #TheBlueNation to 84 for 6 before Leon Mohabir and Danesh Deonarain started a partnership pushed the score to 103 before Deonarain (16) was dismissed.

For the second time this season 14 year old Moien Khan would enter the crease with his team in trouble and contribute a meaningful inning. The young all-rounder picked off the bad balls expertly to score a vital 26. Khan along with Mohabir (17*) added 47 for the final wicket to take RHLCC to 150 all out.

Bowling for VCC Harleem Singh was the pick of the bowlers with 2 wickets for 23 runs off of his 6 overs with 1 maiden.

Carmichael and Inzy Khan came out with fire in their eyes knowing that the wicket was not the easiest to negotiate by a batsman. The new ball pair made light work of the VCC line up scalping a combined 8 wickets for 38 runs off of 16 overs with 3 maidens. Carmichael led the way with a singing 5 wicket haul. He got to the landmark giving up just 13 runs off of his 8 overs bowling 2 maidens.

Inzy Khan finished with 3 for 25 off of his allotment before Altaaf Habibulla wrapped up the tail with two wickets off 4 balls. Swapnil Sheth was the lone VCC batsman to make it to double figures with 11 runs before his team was bowled out for 42.

The 108 runs victory for RHLCC was a turnaround from the previous week when Galaxy CC handed the team a 5 wicket defeat at the Baisley Cage.

The RHLCC EACA regular season came to an end following the victory against LIUCC on July 23rd. #TheBlueNation enters the semi-final with 8 wins, 2 losses and one no result. Semi-Final is set for this Sunday, August 6th at the Baisley Cage against Big Apple Cricket Club, start time 1 PM.