CCA Cricket Festival All Set To Bowl Off

Over a cup of tea, a group of the academy’s members came up with the idea of hosting something at the grassroots level, and knowing the amount of talent that exists around the country, they anticipated something special, something that has never been done before – a Cricket Festival like no other.

After numerous meetings, they decided on the format of the Festival, so it was now time to put the personnel in place to perform the countless duties that needed to be done. The committee members decided on placing the following persons in specific roles; Biju Kattuparambil (Tournament Chairperson); Rajesh Bhat (Web and Twitter); and Biju Nair (Scoring). They all have been working around the clock to make this event a success, and they are very confident that this will be the start of an annual festival that the kids and their parents will look forward to attending, every year.

I had a chat with Biju Kattuparambil, the Tournament Chairperson, and as expected he is ready and raring to get the ball rolling. He said, “What started off as a small project ended up to be the biggest cricketing event on the Western seaboard, and possibly the biggest long version youth cricketing tournament in the USA. Sixteen teams divided into two age groups — featuring teams from New Jersey, Atlanta, Chicago, St. Louis, Seattle, San Diego, LA, and the Bay Area are going to battle it out. And how popular and challenging is this festival? CCF management had to put many of clubs on the waiting list as the registration filled up pretty quickly. Registered teams have been reaching out to clubs who are not participating, and recruiting talent to strengthen their teams. It is definitely going to be a show of strength, of top notch talent, of camaraderie, of rivalry, of joy and heart breaks.

The task of running such an event is very challenging but with help from the many volunteers and many parents, I am confident that we will pull this off. I am hoping to see many spectators coming out and supporting our cricketers of the future. All the matches will be played in the Bay Area, we are using eight grounds within a thirty-mile radius. Thanks to California Cricket Academy (CCA) founders Hemant and Kinjal Buch for their tremendous support for this tournament. Their commitment, passion and hard work for youth cricket development has been inspiring.”

CCF has partnered with CricHQ for the scoring logistics. Now, how many have heard of cricketing event organizers giving free training to scoring volunteers across teams? Now that speaks volumes about commitment and professionalism. The person with the responsibility of making sure every single and every six is scored is Biju Nair, who, in an invited comment on the event, said, “California Cricket Festival hosted by CCA  has thirty-two games spanning four days across eight cricket grounds in the Bay Area. At any point there will be six games in progress and involving U15 and U12 teams. All matches will be scored through CricHQ.

CricHQ is a cricket social network that connects players and fans through social network functionality. Including live cricket scoring, notifications and news feeds.  You can find them at California Cricket Festival game scoring has been instrumented by CricHQ and you can find the online score through the link below 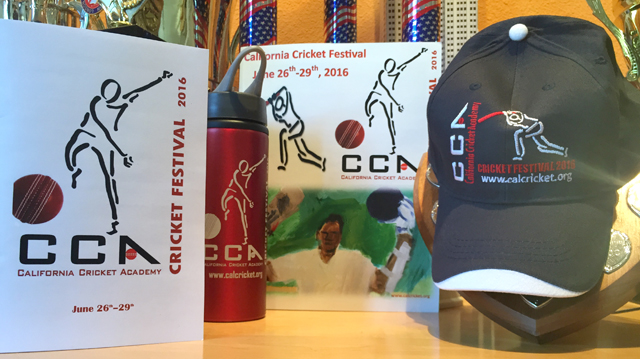 CricHQ is one of the most intuitive cricket scoring tools available. This provides leader boards for all levels including individual Bowling, Batting and over all team performances. CCA and CricHQ collaborated very closely to enable the success of the California Cricket Festival scoring.  Two hours of training was provided to scorers across the US, and are participating in the CCF matches in California this week. More than 20 participants joined the WebEx training conducted by CricHQ experts. I Biju Nair from CCA was organizing and driving the instrumentation of scoring through CricHQ. For the CCF CricHQ will be providing the player statistics for more than 200 players. In the recent past CCA hosted NWR U14 selection trials which also used CricHQ to cover the statistics of 80 young cricket players.”

The next challenge for CCA was to make sure the kids friends and families could follow their progress in the tournament even if they are millions of miles away, and they knew the way to do that would be through technology. Rajesh Bhat would be the man they entrusted that job to, and he didn’t disappoint. Here is what Rajesh had to say about the job he has been doing, “The CCF landing page http://calcricket.org/cricketfestival  is very informative and dynamic, and we are sure that the event attendees and the other interested folks back home will be locked on to this page during the tournament.

The landing page is mobile friendly which allows complete access anywhere. The schedules and the embedded CricHQ link are at the top of the page for a quick view.

Viewers can see the slideshow of the freshly uploaded festival pictures. It’s so easy to share the pictures, simply take a picture and tweet it with #ccacricfest.  Anyone with a smart phone can be a festival photographer!

We have a dedicated section for Team Managers & Volunteers to ensure that they can view the schedule, rules and CricHQ all in one place without needing to jump around.

If you are in the mood for some reading, the festival magazine can be downloaded, and fear not, you can download it in less than a minute, right onto your mobile phone.

Of course all of this content is available via web browsers for those desk/ lap-top bound.

With all the logistics in place, and the opening ceremony finished, the kids, their parents and all the officials are ready to get the ball rolling. Good luck to all teams and the players in the tournament. Don’t forget you can follow all the action as it happens at http://calcricket.org/cricketfestival/