CCA Test Of The Ages Match

By Navneet Waraich, CCA Alumni
On Saturday, January 2nd the California Cricket Academy (CCA) hosted an Alumni Cricket game at the Dilworth Ground bringing about newer and older players alike. Much of the anticipation was built around CCA alumni players being able to play a game together again after many years apart. For some of the CCA alumni there hasn’t been much cricket, but as the game began they were able to find their footing again as if riding a bike.

The event started with one of the founding member Rammohan Varadarajan presenting a ball used when Vinay Suri scored one of the early centuries for CCA – 138 not out in 2005 at Dilworth Elementary School. Interestingly, out of 24 players who participated in that game, 15 represented USA in various age groups, and almost all represented the North West Region in various tournaments over the years. 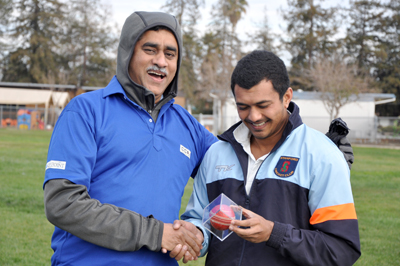 Vinay Suri received the ball from a game in which is hammered 138 not out from Rammohan Varadarajan. Top photo is the Alumni team.

“We look forward to the alumni game every year with the boys who started when they were 6-7 years old at CCA in 2003. They have been very loyal to their Alma Matter, and supports the organization in many different ways.” said Hemant Buch, founder of CCA.

The teams were split with players that were around during the old Spice Hut tournaments (2004) against recently graduated CCA players from the Keypoint Tournament. It was a fairly fought contest as both teams showed their skills with bat and ball. The alumni team having won the toss chose to bat getting off to a flyer. Despite the field being damp and heavy the new ball soared across the park setting the tempo for the batting team. Even as wickets fell and the rival team was able to claw back into the game using their slower bowlers the run rate stayed around eight runs an over as the Alumni team finished with 200 in 25 overs. Vinay Suri was the highest scorer with 54 that included three sixes and eight boundaries.

The recent CCA graduates team showed no apathy as their openers Brahmam and Srihari Dasarathy both approached half-centuries, getting off to a flyer much like the alumni team. The new ball was hard to keep inside the inner circle as boundaries came in flourishes of fours and sixes. Before the openers retired they were able to put on 79 within seven overs, much like the first innings, however, once the ball got older and slower the run rate was pegged back as the innings started to round out. With wickets falling and big hits being brought to a minimum, the game went down to the last over with the rival team scoring off the last ball to win the game.

It was as competitive as it was fruitful, as many parents came by to support the players offering ethnic foods and snacks along the way. With the weather holding up, the sun was beating down and allowing for the game to finish in a timely and exciting manner. Much of the event was a success, despite some big hits disrupting the neighbors, but all’s well that ends well in a game that brought about so much excitement and camaraderie, and being around old and new teammates alike.