By Shivnan S. Ramjattan
Richmond Hill Cricket Club (RHCC) registered their first win of the 2016 season with a solid performance against Gladiators Cricket Club (GCC) at Lido Beach last Sunday. Regrouping after two disconsolate performances against ACS and Atlantis—one of the Eastern American Cricket Association (EACA) premier club, led by Guyana and West Indies batsman, Sewnarine Chattergoon, with an unbeaten 75, and plucky leg-spinner, Shawn Thompson, with Five for 37 ensured RHCC completed  their first win of the young season. The game was reduced to 30 overs due to overnight rain. 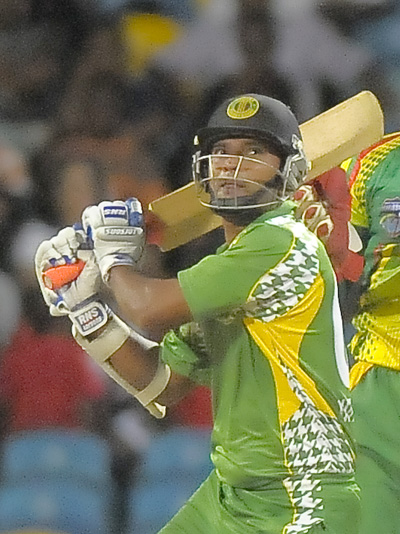 With both teams in pursuit of  their first win under overcast conditions, GCC were invited to bat first and soon found themselves in trouble at six for two. However, Shafeek Shaw(33) and Andy Harricharran (49) consolidated the innings with a third-wicket partnership of 100—both batsmen innings were highlighted with 14 boundaries, at the receiving end was S. Thompson, who had the final say by dismissing S. Shaw while Skipper Shameer Sadloo rattled the stumps of A. Harricharran. Only two other batsmen reached double figures, Manjrekar Bhola (19) and Andre Persaud (25) as Thompson spun circles around the lower order.

With 5.16 an over required for victory, RHCC were off to a brisk start from Marlon Kallicharran (28) and Imran Ali (8), 25 from three. Both fell with the score at 25 and 63 respectively. Sewnarine Chattergoon coming in at number three and after two earlier failures finally found his composure and announced his arrival at the wicket with some heartwarming shots all round the park. He and the experienced Debo Sankar saw them closer to their target with a third-wicket partnership worth 125 with some sensible and timely boundaries as required . Debo fell for 25, and with only four required for victory—Young Eion Sadloo (4 n.o) saw no further loss as RHCC romped home in the 24th over.

Richmond Hill Cricket Club will come up against an improving Galaxy Cricket Club after the holiday weekend at the famous Baisley (Cage) Park.