ST JOHN’S, Antigua – Leeward Islands Hurricanes’ Rahkeem Cornwall stamped his name on the Super50 Cup from the very first match, when he smashed an unbeaten 132 not out against the USA cricket team, in the second match of Group B in Antigua. 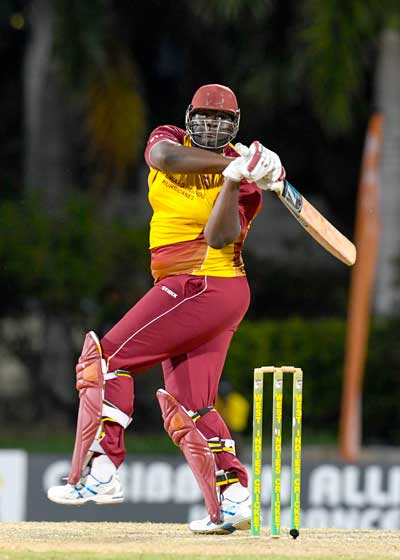 Hurricanes Captain Kieran Powell won the toss and elected to bat first at the Coolidge Cricket Ground. Powell did not last long at the crease, as Elmore Hutchinson uprooted his stumps for 4. In came the dangerous Marlon Samuels, who went one run better than his Captain, but Hutchinson removed him in the same manner as Powell for 5.

Opener Montcin Hodge was joined by Devon Thomas and they rebuilt the Hurricanes innings, posting a 72-run partnership before Tomas was trapped lbw for 32.

Cornwall then took it upon himself to fire the Hurricanes to 298/8. He struck nine mammoth sixes and eight fours on his way to the first century of the Super50 Cup 2018.

The USA’s reply took a hit the very first ball when Sunny Sohal was bowled for 0. Xavier Marshall and Jaskaran Malhotra then found a nice rhythm with an 81-run partnership. Both men became two of Cornwall’s three wickets, scoring 40 runs each.

The rest of the USA’s innings folded soon after. Akeal Hosein’s spin wreaked havoc, he finished with figures of 5/26 combining with Cornwall’s 3/27 to bowl out the USA for 131. Giving the Leeward Islands Hurricanes victory by 162 runs.

Earlier in the day, Guyana defeated Kent CCC by 35 runs. Shivnarine Chanderpaul was the Jaguars top scorer with 67 followed by Anthony Bramble with 39. Mitchell Claydon was Kent’s best bowler with figures of 5/31.

Zak Crawley led a valiant chase for Kent of 60 runs followed by Sean Dickson with 29.

Hurricanes will play the Jamaica Scorpions in the 2pm match on Friday, February 2 at the Coolidge Cricket Ground.