By Sham Ali
(Celebrating 35th Anniversary – Match #1083):- On a near perfect day for cricket and perhaps the hottest day so far for the season Cosmos battled with Lions at Canarsie Park last Sunday. 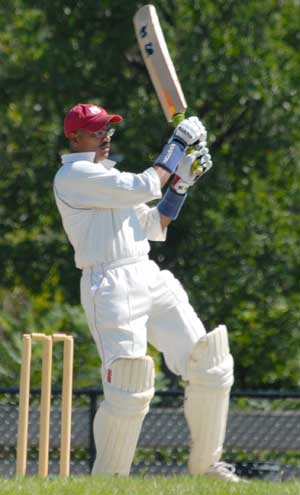 Sham Ali provided an all round performance for Cosmos, hitting 23 before taking 4 for 25. Photo by Shiek Mohamed

It was a good toss to win and Lions elected to bat on a flat pitch, however, Lions captain Rowdy Busgith must have questioned his decision after they found themselves in some trouble at the end of opening spell between Sohan Dass and Sham Ali.

Dass initiated the breakthrough when Kaveen Shirley held on to a good catch at short mid-off. Ali then swept through the next four top order batsmen with a tidy spell. Alex Chunilall held on to a stunner diving forward at deep mid-off to remove K. Marshall (24). D. Hart (11) then lost his stump to confirm that the wrist band was never an issue, but just a cheap ploy. W. Myers was next to go when Suren Persaud took a comfortable catch at mid-on. Ali then clipped the edge of A. Bartley into the safe hands of wicketkeeper Daniel Chunilall to complete his spell of 4 for 25 leaving the opposition in tatters at 49 for 5 at the break.

Cosmos felt they had Lions cornered, however, E. Loten and Cuthbert Mendonca combined for a crucial partnership after Mendonca was given a chance, before he scored, at slip off David Mohamed when P. Sanicharran grassed a sitter. Cosmos would rue that let-off as the pair posted a crucial 99 runs partnership to take the score to 148 runs in the 29th over. It was a partnership that underlined the lack of effectiveness in the Cosmos’s attack against this pair, before Mendonca went for 36.

Loten though looked solid throughout his inning and ensured that Lions crossed the 200 mark. A scoreline that gave the match a new completion from the initial start as their inning closed on reasonable 205 for 7 off their allotted 35 overs with Loten getting 84 runs not out. S. Dass got 1 for 24, A. Chunilall 1 for 27, and G. Lorick 1 for 35.

Cosmos in reply, got off to a good start with G. Lorick (34) leading the charge at 97 for 3 off 16 overs. But then Cosmos found a way to orchestrate a dramatic middle order collapse that resulted from a few injudicious shots that subsequently transformed the inning. D. Mohamed fanned a thin edge off a short ball. S. Dass padded up to the next ball and lost his off-bail. G. Ramsingh then got a thick inside edge was adjudged lbw, and D. Chunilall (29) pulled a long-hop to mid-on as Cosmos moved rapidly from a position of command, 97 for 3, to one of survival, 107 for 8 by the 22nd over. Ali (23) and A. Chunilall (16) then added some respectability to the inning taking the score to 146 all out in the 30th over before Lions completed their first victory for the season. D. Waysome took 3 for 26; R. Busgith got 2 for 23.