By Sham Ali
(Celebrating 35th Anniversary – Match #1082):- They want to play. They are given the opportunity. They delivered sooner than expected, and they did so with that Cosmos never-say-die attitude, and that is how good cricketers are born. 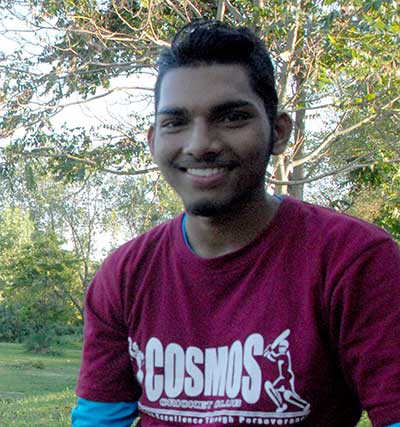 Alex Chunilal was fantastic with the ball, taking 3 for 8 off 5 overs.

Under cloudy skies Islandwide won the toss and inserted Cosmos to bat. Daniel Chunilal and Aiden Robinson walked to the wicket to open the batting for Cosmos. Chunilal (7) looked solid before he feathered a catch down the leg side. Royo Sankar (7) was next to go when he was bowled by a faster ball from left arm spin, former West Indies player, Gary Mathurin. A few mini partnerships kept Cosmos in the hunt, and the score ticking at a healthy six runs an over. David Mohamed (17), the former Trinidad and Tobago national player, looked comfortable before he drove loosely to extra cover. Sohan Dass, the former Guyana national player, featured in another partnership with Robinson before Robinson (17) played around to a full delivery.

Dass and Ganesh Ramsingh took Cosmos to 130 by the 22nd over before Dass (24) miscued a juicy short ball to mid wicket. D. Balgobin (7) then went via lbw, before the two veterans Debo Sankar and Ramsingh posted a crucial 40 runs partnership. Ramsingh looked his usual self punching through the extra cover region with authority while Sankar milked a few under the drizzle. Cosmos inning closed on 179 for 6 off their allotted 30 overs, with Ramsingh getting a confidence booster 34 not out and Sankar a solid 25 not out. S. Mangal took 3 for 48, G. Mathurin 1 for 34, A. Fontenelle 1 for 23, and K. Agustin 1 for 58

Cosmos struck an early blow in their defense when Sham Ali removed Mangal’s off stump in his second over, however, L. Serieux announced his intentions immediately taking D. Mohamed for a maximum over mid-wicket and through mid-on. He was given a reprieve in the next over off Ali when R. Sankar grassed a sitter at mid-on. Islandwide then raced to 70 for 1 off 8 overs, and a change in the attack. Alex Chunilal replaced Mohamed and he immediately struck blood with two crucial blows with his first ball and last ball in the over when he got one to kick off a length that clipped A. Fontenlle’s edge and bounces off wicketkeeper Daniel Chunilal chest and landed safely in his glove. He then removed Serieux (55) when Mohamed took well judged catch on the mid-on boundary. He then removed S. Draketle in his next over when Dass held on at short mid-off. Chunilal was simply brilliant in an abbreviated spell taking 3 for 8 off 5 overs courtesy of the umpire’s card.

With the score on 130 in the 22nd over. A. Robinson and Balgobin then delivered an inspired spell of medium pace bowling. D. Balgobin trapped H. Mathurin in his first over, as Cosmos began to fight their way back into the match. A threatening partnership between G. Mathurin and K. Agustin took the score to 150 before Balgobin struck again when Dass picked off a bloody sharp catch at extra-cover to remove Agustin and split his finger. Robinson operating from the other end kept a steady line while putting together a stingy spell including a crucial maiden in the 27th over. Alternatively, Balgobin struck deadly blows in his 4th, 5th, and 6th over. With 10 runs needed off the last over and then 6 runs off two ball, Balgobin cartwheeled G. Mathurin mid-stump to plug the rhetoric of about ‘coming to play schoolboy cricket’ and give his team an emphatic victory. Robinson finished his spell of 6 overs for 23 runs, and Balgobin 4 for 27 off his 6 overs.

Cosmos will play Lions next Sunday at Canarsie Park.