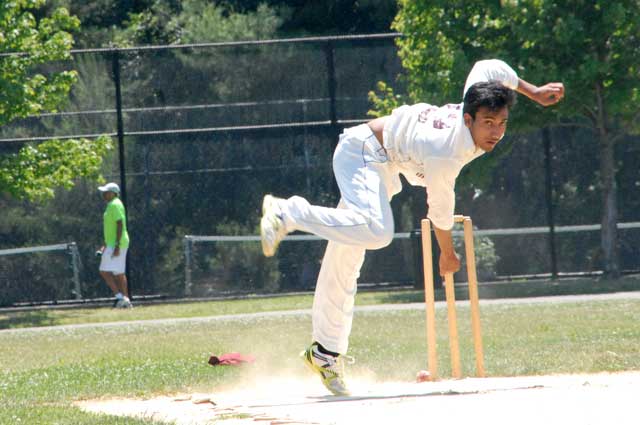 By Sham Ali
(Celebrating 34th Anniversary – Match #1040):- Cosmos paceman, Thohidhuzzaman Rana, sent down an impressive opening spell against Queens United at Idlewyle last Sunday, however, it was one of the few highlights for Cosmos on a pitch that offered very little for bowlers after Queens United won the toss and elected to bat.

Rana is a good young fast bowler in the making and one to watch in the seasons ahead. Rana reaped early rewards for hitting a good line outside off-stump with some away movement, and Cosmos couldn’t have asked for a better start when Rana struck in the first over. He got one to bite the edge of Richard Staple and it flew to second slip where Faisal Tal held on to a regulation catch.

Rana then removed Gavin Wallace in similar fashion in his next over over when wicketkeeper, Daniel Chuninlal held on to an excellent catch. Cosmos then suffered a setback when Rana felt unwell and had to leave the field in his fourth over. Opening batsman A. Davis declared his intentions early when he took Sham Ali over mid-wicket and mid-on in succession. He attempted the shot in Ali’s next over and skied to point where Imrul Hasib waited and fluffed a sitter. Ali then clipped Davis’ s outside edge twice and that of Nikumra Bonner, the current Jamaica player, in his 4th over only to see the opportunities went begging between wicketkeeper and first slip. It was two costly misses and a recurring theme this season.

Taj and Ricky Kissoon combined for an inspired spell of right arm legspin, and left arm orthodox spin respectively in their effort to penetrate the opposition’s middle order. However, the combined spell produced a solitary wicket when Taj trapped Bonner (46) to keep Cosmos in the equation by the 25th over with the score on 159 for 3. Unfortunately, Cosmos was left to rue the chances to remove Davis (115) earlier as he and M. Dickson (102 no) went blitzkrieg and tore into the Cosmos attack on the death overs. Amjad Khan, Rasheem James, and Imrul Hasib were bludgeoned for 142 runs in the last 10 while Kevin Prince’s solitary last over for seven runs was a relief. Queens United, another one of the new franchise team in 2017 that is basking in the half-life closed their inning on an imposing 313 for 4 off their allotted 35 overs.

Cosmos had humbled this opposition at this venue the last time they met, however, this is a new day, and Cosmos in their reply had an Everest to climb with very little mountain gear, and any hope of reaching the target rests heavily on the spine, and how much time Amjad Khan and Rasheem James will spend at the wicket. Khan looked his usual composed self when stung the opening paceman with three boundaries in the first over, a maximum and two fours. But then he went to highly dubious lbw decision off a flick and any hope that Cosmos had of establishing a solid foundation was reduced dramatically. It then disappeared slowly when Taj, for some alien encounter that appeared out of the Cosmos, swatted his first ball, a head high wide, into the hands of the man at mid-on, and then James pushed softly to cover.

At 30 for 3. Parmanan Sanicharan and Daniel Chuninlal, two good young players and Ogle boys, had a difficult ask ahead of them. They settled into a solid 45-runs partnership. But once the partnership was separated the target became even more daunting for the Cosmos lower order that had struggled for some consistency all season, and the inning eventually petered out foe 97 by the 27th over. It was another one of those days for a young Cosmos team that may be short on wins, but remained focused, showed heart and displayed an abundance of discipline (with some left over to share) against a formidable opponent.